Advent Calendars - What Do You Know?

You buy it for your kids every year. They love it and thinks it's fun and a good way to count the number of sleeps until Santa comes. But do you really know what the Advent Calendar represents?
I don't, or didn't until I researched this article. And yes, I bought them for my children, too.
The definition from the dictionary says it is a piece of card incorporating small numbered flaps, one which is opened on each day of Advent to reveal a picture appropriate to the season. (So, I'm not sure where that puts the Star Wars Advent Calendar:))
So back to Wikipedia and the web, where my research says Advent come from Latin (don't most of our words) and that it means 'coming.' Centuries ago Christians felt they needed more than one day to celebrate Christ's birthday, so they could meditate on it, prepare for it and teach their children the significance of Christmas.
Originally the Germans counted down the first 24 days of December by drawing a chalk line on the door each day, beginning December 1. There are several stories about when the actual Advent calendar was produced.
Some say as early as 1831, others the early 1900's. The during the Second World War they were discontinued because cardboard was rationed. They restarted in 1946.
The traditional calendars often consist of two pieces of cardboard and take the form of a large rectangular card with 24 "windows", one for each day leading up to Christmas. One is opened each day leading up to Christmas, revealing an image, a poem, part of the nativity story or a small gift. Some calendars are strictly religious, others can be anything and can come in many various sizes and forms.
In Denmark an adventkalender only has four gifts which are opened on each Advent Sunday leading to Christmas.
The Advent Calendar is very popular with children, but many feel it has lost it's true Christian meaning. 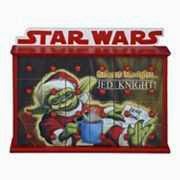 Do you use an Advent Calendar? Is it tradition is your family? I'd love to hear from you. 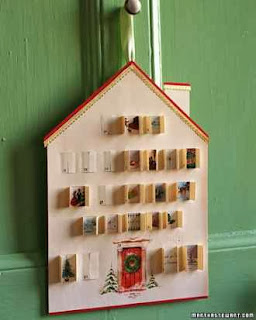 Posted by darkwriter at 3:09 PM