5 Secrets (What No one Knows About My Book)


I'm trying something new today. I thought it might be a fun post and people might be interested in a few tidbits about a book. Things no one else knows, until now. Behind every book there are stories that never get told. How did the writer find the plot; why that setting; back story on some of our heros; are the characters based on someone they know - and why.

Today, I'm using myself as the guinea pig. I'm starting off with 5 secrets about my book, HUNTED. You will not know these things even if you buy the book and read it.

1. HUNTED became an idea many years ago, in Victoria, BC. I was staying at the Empress Hotel. It is over a hundred years old and a beautiful building. I love the hotel. I was standing in the elegant lobby, on it's grey marble floor and looked up at the mezzanine. I wondered if anyone would ever hide up there, behind the marble railing, with it's wide columns, and watch the lobyy to see someone come into the hotel. The idea intrigued me and I started to write a scene.

2. I decide to have Maggie in the Witness Protection Plan. It made sense to me, and to the plot. I was told no way would anyone in Witness protection would ever be crooked. I debated changing that part, but I thought - we have crooked law enforcement officers in every profession, why not in Witness Protection. Then I read a story where Witness Protection people were charging people to get into the program and selling their locations to the highest bidder. So, yes, it was fiction, but I wasn't totally out to lunch.

3. A year ago I was going through my written novels, not all are finished, and realized I had set four of them in small towns in Montana. I decided to make them all into a series and sat down and wrote sketches for Duster and set them all there. Then I made the heros all brothers. It was a lot harder than I thought it was going to be. HUNTED became the first in that series.

4. HUNTED was not the original title. When I started writing it, and it was a secret baby type story, I called it My Life, Your Baby. I could never come up with a good title, no matter how hard I tried. My Life, Your Baby never felt right and it didn't give any feeling abut the actual story. Eveyone said I needed to change it - but to what? When I was planning the series it came to me, and HUNTED felt right.

5. I love animals. I love I try to add a dog to my stories. I have two Shiba Inu's. Their pictures are on my site. They ar my inspiration for animals. For HUNTED I added a merle, Australian cattle dog. You'll also find dogs in my other stories, too.

And if you read HUNTED you now have some background you wouldn't have known before.

Staying alive wasn't Maggie McGonagall's first concern. Her first concern was to convince the man she hadn't planned on ever seeing again, to accept and protect a son he didn't know about. And she had to do it quickly before the hit men found her and her son again. They'd already attempted to kill her three times. She was running out of time. Once Matt was safe, hopefully she'd figure out how to keep herself from getting killed.

Cody Hawkins came runnig when the woman he wanted to forget called him for help. He'd never quit loving her, but could he help her and walk away?

When he found out the trouble she was in and someone was trying to kill, he decided to kidnap her and her son. He took them back to Duster, Montana where he felt he and his family could protect them. Witness Protection hadn't been doing a good job, so far. But could he keep her alive and convince her he still loved her? 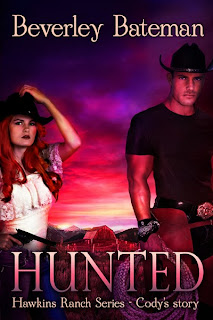 You can find me on these other social media sites.

I'd love to hear from you and your thoughts about this post, (after you finish your Black Friday shopping, of course.) Did you find it interesting? Is it something you'd be interested in by other authors about their books?
Let me know.