Our guest author today is E. Ayers, who is going to share some tidbits about the writing of her book that no one knows--until  today.


E. Ayers is an Amazon best-selling author in Western Romance and she also writes contemporary romances. When she least expected it, she found her prince charming and married him five weeks later. She uses that heart-warming passion as a basis for all her books, because she believes everyone needs someone to love. 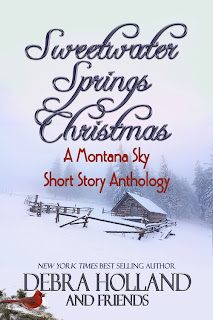 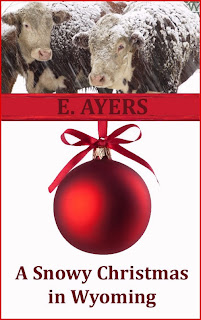 A Snowy Christmas in Wyoming


1: When I sat to write A Snowy Christmas in Wyoming, I didn't think of it as anything other than a little Christmas story. Considering it was Christmas story, what better time to think about all those wonderful family values? And I certainly didn't consider it a western. I didn't write westerns! After completion, I was told I had written a sweet western. But it was just a Christmas story!
2: A Snowy Christmas in Wyoming spent over seven months on the best selling western lists on Amazon.
3: I knew nothing about the Crow tribe when I started writing the story other than there are some very handsome men in some old photos and the reservation is located directly above Wyoming. I knew almost nothing about the tribe when I finished the story. Oh, did that change!
4: I've known several folks tied to the news programs. They don't have a life. The broadcast company owns them. Their hair is cut, colored, and styled according to the company. The company tells them what they will wear, etc. Any free time they have is controlled. They are an image and it must be protected at all times.
5: The success of this book triggered off the series of Creed's Crossing, Wyoming, and the diary of Clare Coleman mentioned in A Snowy Christmas in Wyoming prompted my foray into historical westerns. That diary will also be available soon. My short story A Christmas Far From Home in A Sweetwater Springs Christmas with Debra Holland uses the grandson of Clare Coleman. As I was writing that story, I realized I had another, A Rancher's Woman. It should start appearing at the e-stores next week. 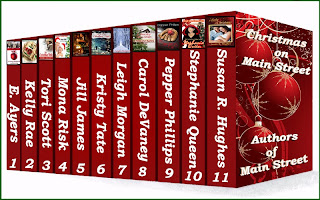 My sweet little western A Snowy Christmas in Wyoming has become the catalyst for so many other stories. Available separately, it is also part of the boxed set, Christmas on Main Street by the Main Street Authors. That's 11 Christmas books by your favorite best selling authors for one low price. (Guess who is a Main Street author?)

BLURB from A SNOWY CHRISTMAS in WYOMING

A Native American cowboy and a national TV news anchorwoman have nothing in common except for their pasts. Is love preordained? An old diary from when Jessie and Clare Coleman settled on the land in the 1840's provides a history of their life. But tucked between the pages is an unrequited love between Clare Coleman and a tall Native American. Does love and land come full circle? In this season of giving, will fate reach through time to give a gift of love?

Andy Coyote settled into the job as foreman on the Coleman ranch. He's got custody of his thirteen month old daughter and the situation is perfect for both of them until Caroline Coleman returns home for Christmas and one of the worst blizzards in years hits the area. He's forced to accept Caroline's help to move a herd of cattle and mixed in it are several head from another ranch in the community. Cattle rustling still happens.

Caroline Coleman has her dream job as a Washington, D.C., news anchor for a national broadcast, but home is in Wyoming on her family's ranch. She has everything that money can buy, but the things that she really wants can't be purchased. Raised with solid, hard working, family values, she knows her life in the spotlight isn't real. She wants a man who appreciates the ranch, loves her for who she is and not what she is, and she wants a family of her own. And she doesn't like the idea of Andy Coyote taking advantage of her grandmother.

You find E. Ayers on these links:

www.ayersbooks.com
Twitter: @ayersbooks
Blog: authorsofmainstreet.wordpress.com
Thanks for checking E. Ayers and her secrets out. If you have any comments or questions let us know. E. Ayers will be around to answer your comments.
And don't forget to check back next week for another of our 5 Secrets.