Here's our next author, Amber Skyze, to share her secrets about the writing of her books that no one else know - until today.


From a very young age Amber Skyze began making up stories–the only child syndrome. While telling tall tales to her friends she never dreamed of putting words on paper. In fact, if anyone told her she’d write when she grew up, she’d have laughed.
It wasn’t until raising children and reading all those romances that she decided–hey, I can write these. HA! Easier said than done.
When not crafting hot, steamy tales, this New York transplant now resides in Rhode Island with her husband, four children (who force her to work a day job), and three dogs.
She currently writes for Ellora’s Cave, Loose Id and is self-published.
Here are her secrets about her book - GOING FOR BROKE. 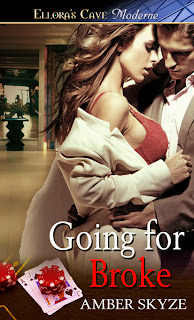 3.       The hero is named after a The Young & the Restless character.
4.       I’m always insecure writing the sex scenes.
5.       I’m jealous of the heroine Holly’s confidence in business dealings.
BLURB from GOING FOR BROKE:

When the two business tycoons learn they’re after the same goal – ownership of the Pleasure Palace, things heat up.High Stakes, Lust, Loss and a battle to the end. Who will walk away with All or Nothing?
To buy GOING FOR BROKE go to http://www.ellorascave.com/going-for-broke.html
You can follow Amber on these links:

FB: https://www.facebook.com/amber.skyze
Website: www.amberskyze.com
Blog: http://amberskyze.blogspot.com
Twitter:  https://twitter.com/amberskyze
Thanks for checking out Amber and her secrets.
If you have any comments, or enjoyed this post, let me know.