This week author Reggi Allder joins us with her tip. Reggi Allder a writer of romantic suspense and contemporary romance likes nothing better than writing tales of love lost and then found, and hearing from her readers makes her day.


Have you ever had your inner editor get in the way of your muse? I was with a group of writers and several mentioned their inner editor, the left side of the brain, was slowing their writing by too tightly monitoring what went on the page, stopping the right side of the brain which controls imagination and creativity and therefore interfering. I could relate to that. As a pantser I know the beginning and the end of a new book, but creative ideas must flow page to page to get from chapter one to the end of the book as I have no outline. Being a panster works for me, but I depend on my muse. : )


I looked up the definition and according to Wikipedia, muses, in Greek mythology, are the goddesses of the inspiration of literature, science, and the arts. They were considered the source of the knowledge embodied in the poetry, song-lyrics… The current English usage refers to a person who inspires an artist, writer, or musician. I call on my own inner muse to dig for creative ideas.


Below are a couple of exercises that I’ve found helpful to relax the inner editor and hopefully awaken creativity. I like to start with five minutes of aerobics. This can increase the flow of blood to the brain and relax the body. Then do the writing exercises quickly before your inner editor can jump in. It’s fun if you do it with a friend and read your sentences and paragraphs to each other. The important thing is to have a good time and set your muse free.


You will need two sheets of paper and six sided dice. It helps if they are different colors, but it is not necessary. Draw a line down the middle of one of the pieces of paper. Number both sides of the paper, one through six. Put the other sheet aside for later use.


On the left side of the paper write six nouns numbering, 1-6. Pick words that have a strong image. Do it quickly without over-thinking. On the right side write six adjectives. Again choose dramatic words. The wilder the words, the more creative your sentences. For a list of adjectives: http://www.enchantedlearning.com/wordlist/adjectives.shtml


Roll the dice. You’ll have two numbers; use one number for the adjective and the other for the noun. Using the pairs of words, write sentences on the sheet of paper you have put aside.


There is no right or wrong. Have fun with it. You might even find new adjectives you haven’t used.


Pick any book; it can be a text book or a romance. Without looking, flip to a random page and put your finger on a word. Write it down. Repeat this action four or five times. Now compose a paragraph using the words you’ve found. They must be used in the order selected. The challenge lies in using the words in order, so don’t move them around. Enjoy, it doesn’t have to a masterpiece. It’s just to let your creative juices flow.


Apparently the idea of a muse has been around for a very long time. So I looked for author’s quotes concerning them.


Oh for a muse of fire, that would ascend the brightest heaven of invention. William Shakespeare


There is a muse, but he’s not going to come fluttering down into your writing room and scatter creative fairy-dust all over your typewriter...Your job is to make sure the muse knows where you’re going to be every day from nine ‘til noon or seven ‘til three. If he does know, I assure you that sooner or later he’ll start showing up, chomping his cigar and making his magic. Stephen King


The muse is not an angelic voice that sits on your shoulder and sings sweetly. The muse is the most annoying whine. The muse isn’t hard to find, just hard to like- she follows you everywhere, tapping you on the shoulder, demanding that you stop doing whatever else you might be doing and pay attention to her. Harlen Coben


I’m truly, 100% guided by the characters and my muse. If one of the characters suddenly decided to do something very different, I’d just go with it. It’s much easier to let the muse drive than for me to try to steer. Lori Foster


Critique partners are great for running ideas by and sharing. Two writers from my critique group gave me their favorite writer’s quotes:


Creative thoughts are shy; let them come to you. Mary Jaksch


To me, the greatest pleasure of writing is not what it’s about, but the inner music that words make. Truman Capote


My motto for writing is to simply begin, and go from there. All kinds of things happen in the meantime, they interfere, slow me down, and sometimes stop me in my tracks. But then I catch my breath and begin again. Favorite quote:


The most difficult thing is the decision to act, the rest is merely tenacity. Amelia Earhart.


You can’t wait for inspiration; you have to go after it with a stick. Jack London


Don’t tell me the moon is shining; show me the glint of light on broken glass. Anton Chekhov


Ever wonder what happened to your high school crush?
Why is Amy Long attracted to the only man who can prevent her from achieving her dream?


Amy needs a fresh start. After years living in San Francisco and vowing never to return home, she’s back in Sierra Creek to run her grandmother’s farm. Does she belong in the small town?
Cowboy Wyatt Cameron doesn’t think so. As half owner, he’s promised to sell the place and send her packing.
What can she offer to change his mind?
Will sparks fly without breaking a heart? 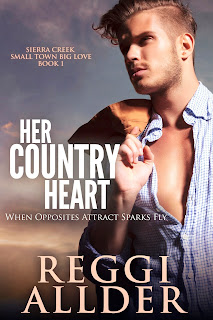 
“Sierra Creek,” the driver shouted as the Greyhound Bus came to an abrupt stop on the two lane highway.
Amy Long pushed her hair behind her ears and grabbed her worn suitcase. Surprised to see her hand tremble, she seized the case with both hands and rushed toward the front of the bus.
A gust of hot wind slapped her face and gravel pelted her bare legs as the bus pulled away. Sierra Creek population five thousand, she read a faded road sign. There wasn’t a building in sight.
After years living in city, she’d forgotten how sweltering and desolate it was here. She’d vowed never to return to her home town. Odd it was the first place that came to mind when she and her small son needed a fresh start.
With Granny gone, there was no family left to welcome her. She swallowed a sob. Maybe it was a mistake to come back.
The relentless afternoon sun beat down and her shoulders and arms began to redden. San Francisco, the air conditioned city, seemed a million miles away.
She cleared her dry throat and wiped perspiration from her forehead. What wouldn’t she give for some shade and a bottle of ice water?
With a sigh, she pulled out her smart phone and checked the time. Thirty minutes since she’d arrived at the bus stop and not a single car had gone by. Where was the arranged ride into town?
Granny’s handyman promised to meet her. He obviously wasn’t a stickler about being on time. She groaned and reminded herself she was in the California foothills not in a busy metropolis where time was money.
The sound of a truck rumbled in the distance. With the back of her hand, she wiped her bangs out of her eyes and squinted. Hopeful, she watched the pick-up come closer. A shiny black Ford F150 with extended cab pulled up in front of her.
“Hi. Amy?” A man yelled through the open window as his dark hair fell casually over a high forehead and deep-set blue eyes sparkled in the sunlight. She moved nearer and viewed his wide cheek bones, clean shaved jaw and full lips. About thirty?

A flutter of recognition stirred in her as palpable charm radiated from his broad smile, Wyatt Cameron.
His muscular arms flexed as his huge hands squeezed the steering wheel. “Don’t just stand there. Get in. People are waiting.”
Surprised by his gruffness, she stepped back.
“I heard you need a ride into town,” he said quietly as if he understood her reaction. “It’s me, Wyatt.”
“Hi, it’s nice to see you again.” Even now her cheeks burned with the memory of him, her high school crush. She tightened the grip on the suitcase. As she stared her heartbeat increased and her breathing quickened. “Granny’s handyman is going to give me a ride.”
“You could say that’s me. Toss your suitcase in the back and get in the truck.”His expressive eyes flashed as he stared at her.
She shook the pebbles from her flip flops and picked up her suitcase. Filled with everything she and her son might need, she grunted and struggled to lift the enormous bag high enough to push it into the raised truck bed.
He hopped out of the cab and brushed by her. With a sharp intake of breath, she took in his fresh just-out–of–the-shower scent.
Effortlessly, he tossed the bag into the truck.
“Get in.”
She quickly hauled herself into the vehicle and slammed the door. “Nice pick-up. Beautiful upholstery,” she said trying for casual conversation. She ran her trembling hand over the black and white leather seat.
“It’s custom. Had it done in Sacramento by a guy who specializes it tuck and roll car seats.”

“Really nice.”
Pretty fancy truck for handyman. The job must pay better than she’d thought. For some reason she’d believed Granny’s handyman would be an old retired guy gnarled from too much sun and hard work, not the hunk sitting next to her.


You can find Reggi at:
Amazon author page: www.amazon.com/author/reggiallder
Website: www.reggiallder.com
Facebook: https://www.facebook.com/reggi.allder
Sign up for the newsletter for a chance to win an eBook. Reggi@reggiallder.com


Thanks Reggi, for dropping by and sharing that great writing tip.


Don’t forget to check back next week for another author’s tip or tweak.
Posted by darkwriter at 8:08 PM