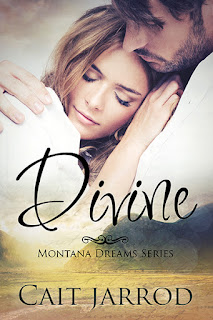 Buy: Amazon Barnes and Noble Kobo
On sale until November 30, 2015


Divine's Blurb:
Matt Carson and Trina Lovett befriend each other during turbulent times at a young age. Over the years, their friendship strengthens building a strong, unbreakable bond. At least that is what they believe. Life choices put an ocean between them, and the depth of their bond is tested.
Under the stress of being apart, heart-wrenching events leave them plagued with doubt. Danger forces them to make irrefutable decisions about what they want from life.
Divine’s Book Trailer:
https://youtu.be/0Xs_txcBDQ4


Divine Excerpt:
“Hi, Trina!” The low, seductive voice came from beside her.
Her muscles tensed. Excitement and dread each fought for a stance. Matt’s voice zinged her body, excited her nipples to beads, and caused her to squeeze her thighs together. “Matt,” she breathed.

He looked good, too good. His worn jeans clung to his muscular thighs. The navy blue pullover brightened his heavenly eyes. Dreamy. His tanned face and five-o’clock shadow sent her gotta-have-it alarm screaming off the rails. Gorgeous, more striking than she remembered.


She sucked in a hard, deep breath, and tried to reign in the excitement of seeing him, while battling the fear Cal would arrive any minute.
“I owe you,” she whispered, instead of yelling into the phone, and ended the call.


“You’re a sight.” Matt’s face brightened, his grin infectious.
She wanted to rush into his arms but refrained, afraid any moment Cal would show.


“Man, you’re beautiful,” he said, his tone left no room to doubt his sincerity.
Her mouth watered and her head whirred. Matt was hot. He’d always been, but he’d filled out even more. His youthful features hardened into a man, a warrior, one that could protect and would do so at any moment. She drooled.


He sent her the kind of appreciative glance a guy gave a woman he held in admiration, not necessarily by her beauty but for what he felt. Tingles raced over her body and forced her feet to move. He engulfed her into a bear hug. A hug so tight she didn’t think he’d let go. “I’ve missed you,” he said, his whispered voice tight.
Ohmygod! Her pebbled nipples relished against his hardened chest. He didn’t just have a body that would do any poster justice. No, it wasn’t just that exiting her. It was him. He was her Matt. She slid her hands around him further, squeezed tighter. “I’ve missed you so much!”


His chuckle vibrated her breasts, her hands. The smart move would be to step back before they became any more of a spectacle. She brushed a kiss to his jaw, ready to accept it may have to be enough, when his lips captured hers.
Reviews:
“I love this book!! I absolutely could not put this book down!!! WOW!!! its so much like you are in this story you can actually feel these characters!! .”
~Ruby Compton Hammarstedt


“Divine by Cait Jarrod was the first book of hers I read. Needless to say, I’ve added all of her titles to my TBR list. Normally with a shorter book you feel rushed and that the story doesn’t foster a natural character development but that is not the case with Matt and Trina. This is a very well written book and it left me wanting to experience every up and down with Matt and Trina. You even feel attached to the secondary characters and I am hoping they all get their own book”
~Amy, The Book Boyfriend Addict
To read the rest of Amy's review, click The Boyfriend Addict.
More reviews can be found on Goodreads.

Giveaway-2 $25.00 gift cards. This giveaway will be running through all three releases. Two winners will be picked January 19, 2016.


Stay in touch:
If you would like reading pre-released excerpts, helping to decide characters’ names, voting on which picture to use, and winning prizes, my street team is open to new members.
Click the join button
Cait’s Classy Chicks Street Team
My newsletter comes out about once a month.To subscribe

To learn about the author; check out Cait's website.
Posted by darkwriter at 7:25 AM