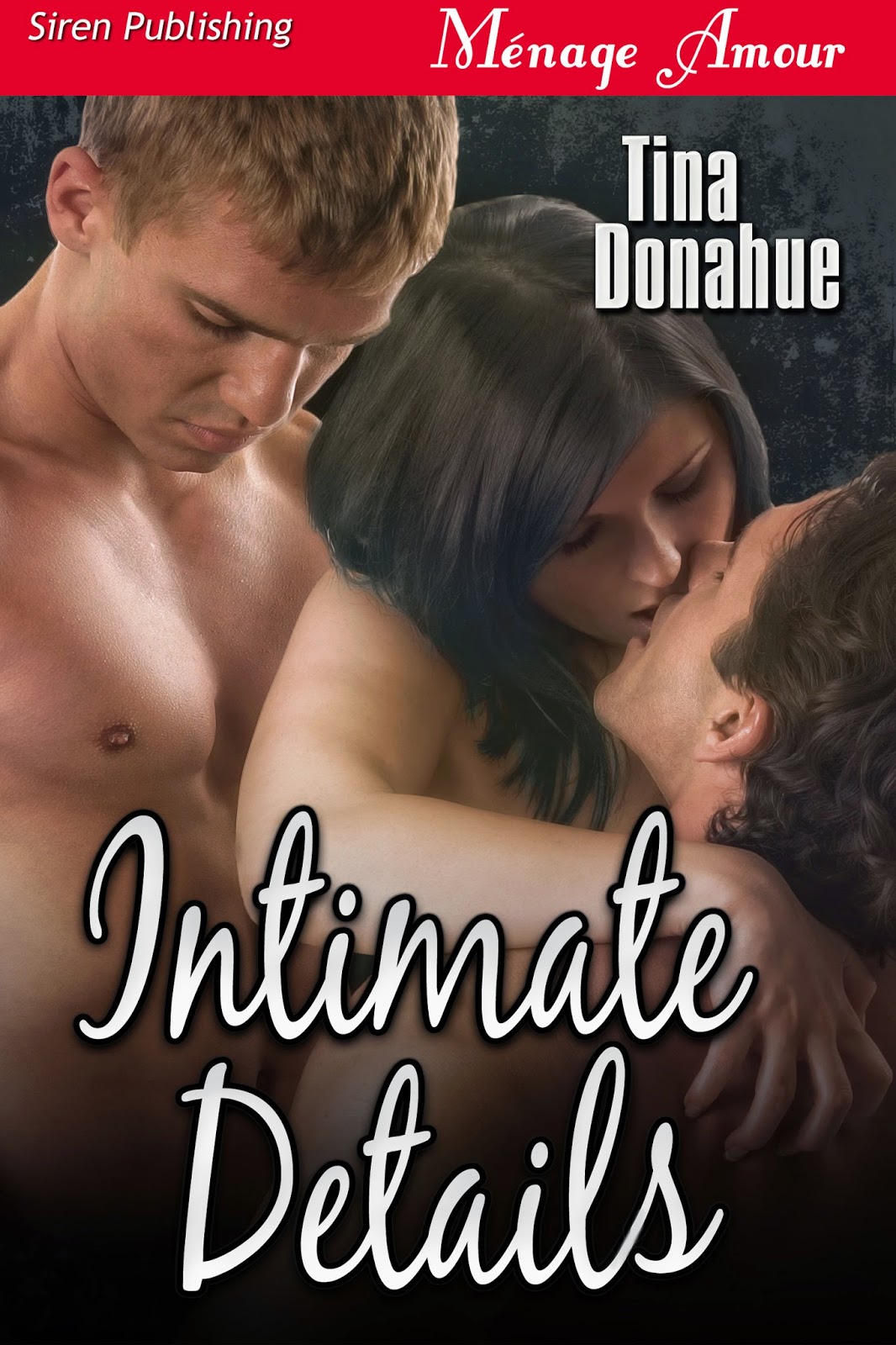 Blurb:
As a computer hacker, she demands justice.
As a woman, she craves two powerful and commanding men.
Shana’s been hacking one of Manhattan’s most corrupt executives, making him pay for what he’s done to his victims. Using her skills, she convinces Mike and Cody to hire her at their intelligence-gathering firm, where intimate details help their clients.
Never has Mike met a woman as delicious as Shana. Smart as hell, curvy and assured, she’d be a delightful challenge in bed. Cody’s carnal hunger is equally intense. He and Mike want to know everything about her.
She won’t divulge the secrets of her past. All she can offer is unquenchable desire and her heart.
During weeks of shameless lust and pleasure, Mike and Cody peel away the layers of Shana’s life. The stunning truth changes everything. They’ll do all that they can to keep her safe…and in their arms.

Shana staggered from him, her mouth still wet from his kiss and Mike’s. She’d mussed his hair. Cody’s tie was askew. Backing out of the elevator, she murmured, “Good night.”
Before either of them could respond, Shana turned to flee. No way could she ever come back here.
“Whoa.” Mike grabbed her wrist as he had in the suite.
The guard at the front desk leaned up in his chair. His beer belly hung over his belt. His expression said the security cameras had shown him what had just gone down in the elevator. “Everything okay, Mr. Russo?”
“Is my driver out there?” Mike asked.
The guard craned his neck to see. “Yes sir, he is.”
“Please tell him we’ll be out in a few minutes.”
“Yes sir.”
The middle-aged man hurried outside. Mike held Shana’s wrist gently but firmly. “Good night?”
His lower lip shone with the moisture she’d left on him. Several locks dangled over his forehead. Unable to help herself, Shana eased them back. “I need to go home.”
Mike’s gaze remained lifted to her smoothing his hair. “Yeah, we get that.” Cody had just joined them. Mike spoke quietly. “You’re taking off after what just happened in the elevator?”
She lowered her hand. “It shouldn’t have.”
Cody frowned, his expression a mixture of confusion and disappointment. “Why not? Clearly, we all enjoyed it. You did, right?”
More than anything Shana could recall. Their strength was thrilling and protective, an amazing combination she longed for but couldn’t risk.
Her throat tightened. Tears threatened.
Suddenly, she felt beyond weary and so alone she rested her head against Cody’s shoulder. Stupid, she knew, but Shana couldn’t help herself.
Cody hesitated a moment, then ran his hand down her hair. Mike played with her fingers.
She fought against smiling and crying. Crap, her emotions were all over the place.
“You okay?” Cody murmured.
Shana nodded then shook her head then nodded once more.
“You’re hungry and tired,” Mike said, speaking softly. “You’re not yourself.”
She laughed, unable to stop. “How can you say that? You don’t know me.”
“We want to,” Cody whispered.
Her belly clenched with worry. What they were asking for wouldn’t work. Shana knew they’d never harm her deliberately. They weren’t that kind of men. However, they were human and eventually they’d hurt her. It was what people did to each other, whether they meant to or not. Best not to get involved. She needed peace. They deserved a better woman than she could ever be.
“We can talk about it in the car,” Mike promised.
Shana eased away from Cody then memorized his and Mike’s features because she couldn’t see either of them again.
“Really, we can,” Cody said.
Smiling sadly, she straightened his tie then patted the knot, drinking him in, loving the gentleness in his expression, his rough good looks.
“What?” he asked, as Mike had earlier.
Shana’s emotions raged, battling with her thoughts. What she knew she had to do.
The guard returned from the outside.
She glanced at him then the glass door swinging closed.
Mike and Cody shifted their weight as though they expected her to bolt.
Shana should have. Leave, she ordered herself. Now.
The guard looked at her curiously.
She turned from him before he could read her expression. Mike and Cody studied her.
Both of them were everything she’d ever wanted in a man, in a friend, and far more than she’d hoped for.
Go.
“Yes,” she said, speaking before she could stop herself. “I enjoyed every second.”
They smiled.
“And I’d like more,” she added, admitting what was in her heart.
Now, they grinned.
“But it’d only be sex,” she said, low enough so the guard wouldn’t hear. “Having a good time. Nothing personal. Ever. You guys couldn’t possibly want that. You deserve more.”
“Wait,” Mike said, again keeping her from leaving. “Who said we’re looking for a commitment for god’s sake. What’s wrong with just being friends?”
“Yeah,” Cody chimed in. “We already know what kind of lattes you like and that you’re into cheesecake brownies. That’s personal. As far as I can see the world didn’t screech to a stop when we found that out.” He glanced around then shook his head. “Nope. It hasn’t.”
Mike leaned close, delivering his wonderful fragrance. “We’ll keep it fun. Promise.”
“Nothing personal,” Cody said. “Strictly surface crap. We’ll talk about work, clients, sports, films, food, books. Stuff like that.”
“Why?” she asked, stirred by what they’d said, frightened as hell too.
Smiling, Mike brushed Shana’s hair from her shoulder and stroked the side of her neck. Her breath caught.
“Because we like you,” he murmured. “That’s what friends do. However, I do have one personal question, and I want an answer.”
Her skin got clammy. She stepped back.
He followed. “Are you in trouble or in some kind of danger? Is that what this is about? If so, let us know, please. We can help.”
Shana stared at him.
“Is someone trying to hurt you?” Cody asked.
She thought about Raptor, the threat he’d presented in the past. What he’d do now if he were lucky enough to find her.
“No,” she lied. “No one’s after me.” She faked a laugh. “Seriously, you guys were really in military intelli—”
Cody interrupted, “We just want to help, all right?”
Sobering, Shana nodded.
“We won’t grill you on anything personal,” he said. “But you can’t ask us anything either.”
“That’s right.” Mike took her hand. “No more hacking into our accounts either, business or otherwise. Remember, our lives are as private as yours is. Come on.” 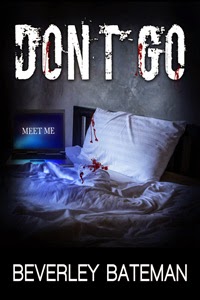 Blurb:
Don’t Go is a dark romantic suspense that takes place predominantly in Reno.  Sam is a Washoe Sheriff detective with a background of sexual abuse. Now she works in teen chatrooms to catch sexual predators.  A serial killer is targeting blonde teen girls in chatroms and one of the girls from Sam’s chatrooms is now missing.

Devlin is a Reno cop who like undercover work and doesn’t do missing kids – except they’re short staffed and he’s assigned a missing girl. He doesn’t believe in relationships and likes one night stands. Now he’s stuck working a case with a computer smart detective who obviously doesn’t do one night stands and has no use for Reno police.
Reluctantly, they must work together to solve this case. Can they resolve their personal issues and bring down a serial killer?
Excerpt:
RENO - WEDNESDAY, MAY 25th

“Yeah, maybe. Or they’re embarrassed because they failed their kid and want to cover up their own failures. Best case scenario for this girl is she meets the guy for coffee and decides to come back home. That happens with the majority of the cases.”
“So don’t beat yourself up. She may be home by dinner tonight.”
“Thanks Pete. I hope so. The worst case scenario involves the hard core pedophiles. If he was one of those…”
Buy Links
Amazon - http://amzn.to/1whWek8
Kobo http://store.kobobooks.com/en-CA/ebook/don-t-go-3
Google Play https://play.google.com/store/books/details/Beverley_Bateman_Don_t_Go?id=akbdBAAAQBAJ&hl=en or  http://bit.ly/10g0BT6
itunes https://itunes.apple.com/us/book/dont-go/id931554378?mt=11
Nook http://bit.ly/1tG0jBB


4. Goodreads Choice Awards is now open until November 8th. The link is 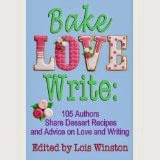 
I’ve added our  cookbook Bake Love Write by 105 authors to the Food and cookbooks section. You can find it here https://www.goodreads.com/choiceawards/best-food-cookbooks-2014


We’d appreciate you dropping by and voting for it.


5. Contest – Advance notice of our suspense writers contest. It will run December 4TH TO 10TH (Wednesday to Wednesday) with giveaways of gift certificates and lots of books. Stay tuned for more info.
Posted by darkwriter at 11:18 PM