5 SECRETS (WHAT NO ONE KNOWS ABOUT MY BOOK)

Our guest author today is Anne B. Cole who is going to share some tidbits about the writing of her book that no one knows--until today. 
In addition to writing, Anne teaches preschool and is raising three very active teenagers with her husband of twenty-two years. Her love for making fresh baked goodies, running, hiking, historical fiction, and her three pet cats continue to be her inspiration while working on the sequel, Souls Estranged, scheduled to be released early summer 2015.


Sharing secrets is fun! Here are my top five secrets behind Souls Entwined…


#5 Pirates! - Johnny Depp’s character, Captain Jack Sparrow from the Pirates of the Caribbean Movies is the inspiration behind Souls Entwined pirate character, Kadir Haty….and yes…Kadir will return in the sequel, Souls Estranged!


#3 Runners - I enjoy running and once nearly tripped over a squirrel that darted in front of my purple sneakers. During Gretta’s run in the park, Sam watches her suddenly fall. He didn’t see the squirrel that tripped her…this was cut out during edits…Readers don’t know in Souls Entwined that Katarina’s spirit is entwined within the squirrel. In the sequel, Souls Estranged, Katarina’s presence within the squirrel will be revealed in true ‘Katarina style’.


#2 Deleted, but not forgotten - I wrote the first draft of Souls Entwined in composition notebooks. It topped at 150,000 words. In this original, Gretta and Sam don’t meet in the park until Chapter Eight! Needless to say, I have many deleted chapters and scenes to reveal in the future on my blog.


#1 Titles - Souls Entwined was originally titled Maledicta, which is the Latin word for ‘cursed.’ During edits, it was suggested that I change my title to something that is easier for readers to pronounce and remember. Authors tend to bond with their titles, especially their first novels. For weeks I referred to my novel as #1 because I already had the sequel written and was in the editing process. I asked everyone I knew for title ideas and finally came up with Souls Entwined. The #1 nickname stuck and I continue to call it #1 and refer to the sequel as #2. The (yet to be written) final book of the Soul Series is called, you guessed it, #3.


So there you have it. I hope you enjoyed Five Secrets from Souls Entwined!


I’m very happy to announce the sequel to Souls Entwined is in contract with an early summer 2015 tentative release date! Souls Estranged picks up right where Souls Entwined left off with Sam and Gretta back in present time and the Bad Luck curse following them.


Gretta’s favorite food in both books---chocolate chip cookie dough---is one of my kids’ favorites too. I know about the dangers of consuming raw eggs, so bake these cookies completely before consuming! And hide the dough from your teens! 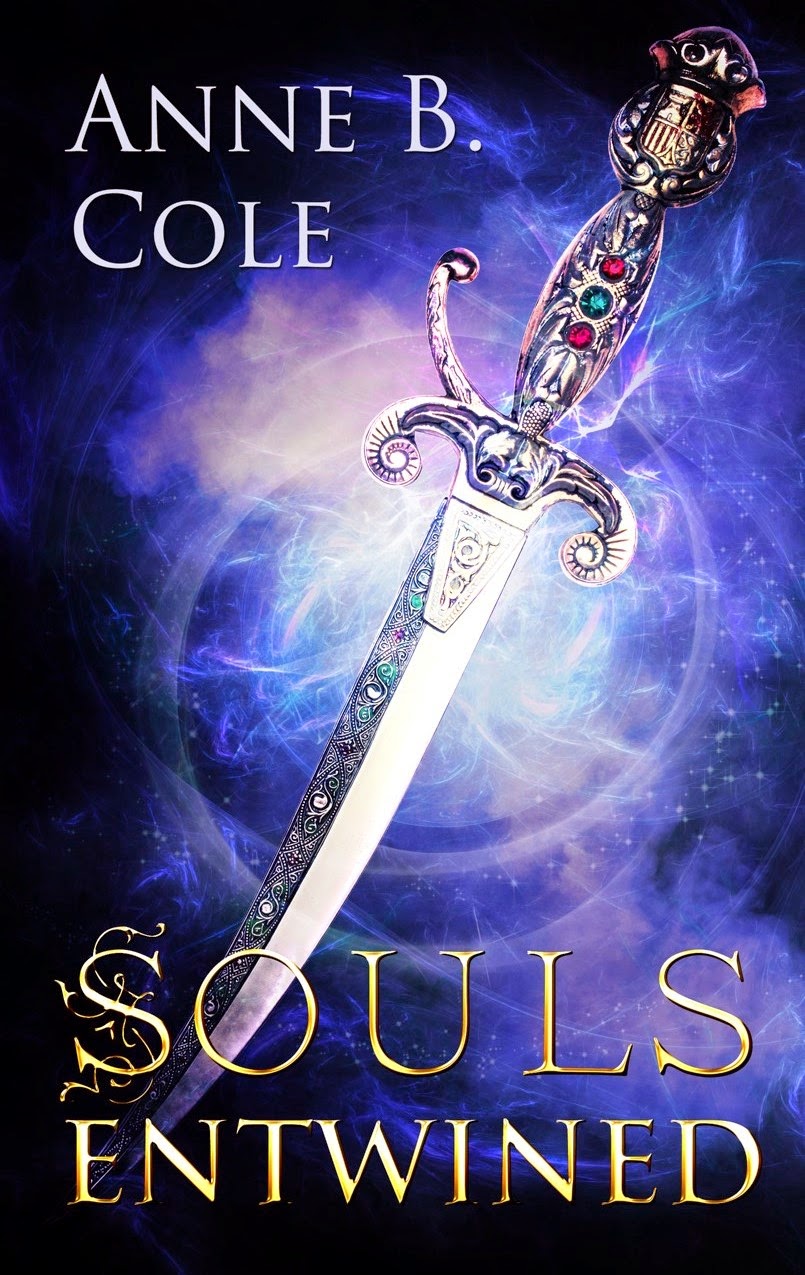 
When a tree crashes upon strangers, Gretta Dobbs and Sam Daggett - time suddenly freezes. A cursed family heirloom catapults eighteen-year-old Gretta back into the past with Sam, who reluctantly agrees to help, despite an instant infatuation with her. Their souls entwine within the bodies of young lovers, Anya and Lorenzo, on a Greek island in 1829. It becomes a race against time to discover the mysteries of Gretta’s ring, while avoiding revenge-seeking pirates.  Failure will cause them to become trapped in the past, and Gretta will be condemned to an afterlife in purgatory, continuing the evil cycle of the ring’s curse


Not a sound was heard as Sam’s eyes snapped open. Under the branches of the downed tree, Purple Shorts began to stir.
“Sorry, are you okay?” Sam gently lifted his weight off her.
“I think so,” she replied faintly. Sam released his hold on her shoulder, amazed her face wasn’t scratched. He wondered how bad he appeared.
“Do you think you can stand?”
She nodded. Together they rose to their feet, easily stepping out from the tangle of branches. Eyes growing wide, she began to sway.
“Sit,” Sam commanded, steadying her.
“No, look!” She pointed.
Sam gazed over his shoulder. His mouth fell open. Beneath the tree, their bodies lay, motionless.
“Are we . . .” Purple Shorts began.
Sam shook his head slowly. Before she could say more, he interrupted, “I don’t know. Do you feel—”
“Dead?”
He scanned the area for help. Everything around them was still, as if they were watching a movie and someone hit ‘pause.’ No wind, no sound, no movement. He flinched when cold fingers clutched his hand.
Squeezing gently, he lifted her hand in front of their faces. “Can you feel this?”
Purple Shorts nodded.
“I don’t think we’re dead,” Sam whispered, gazing into her blue eyes.


Thanks for checking out Anne and her secrets. If you have any comments or questions, Anne will be around to answer them today.


And don’t forget to check back next Thursday to find out even more author secrets about their book.
Posted by darkwriter at 10:48 AM