THE LATEST HEALTH FOOD TRENDS AND A RECIPE

It’s 2014, so of course the trendy foods you should be eating have changed. Here are seven of the latest trends. I am not recommending them, just letting you know what they are. And I’ve added a yummy vegan desert recipe at the end.


Okay – kale is out this year. It’s been replaced by cauliflower. It is low in calories and fat, and high in protein and fiber. It’s flexible and can be prepared in so many ways – roasted, mashed or sautéed. And you can eat it raw. It’s always been part of veggies and dip. And if you really want to be trendy there is orange cauliflower and it has twenty-five more vitamin A

Swiss chard is back and replaces kale and spinach. It’s high in vitamin C, iron, and calcium

The acai berry is out and mangosteen is in. (What is mangosteen? – that’s what I asked) It’s a tropical fruit, rich in antioxidants. It’s reddish-purple with a thick rind and juicy, white flesh.


Ancient Grains are back, partly because of the gluten-free trend. They include amaranth, quinoa, buckwheat, millet, freekeh and teff.


Arctic char, branzino and barramundi will be coming to your restaurants this year. Arctic char has been named a “best choice” for the environment.


Kimchi is a Korean pickled cabbage dish and is becoming popular as part of the growing trend in fermented foods. “They” say it improves cholesterol and blood pressure and may help with weight loss. 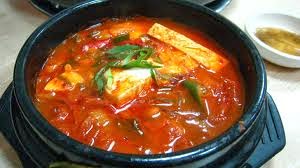 Coconut is still on the list. Coconut oil has no cholesterol or trans-fats and improves brain function and aids in weight-loss.
So now you know what to expect this year.


Here’s a Vegan dessert for you to try.


Courtesy of Vegan on the cheap by Robin Robertson
Anybody have anything to add to the 2014 trendy foods - or comments?
Posted by darkwriter at 12:04 AM