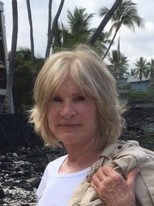 
Kathleen used to write computer programs but now writes novels.   She grew up in Iowa where she caught lightning bugs, ran barefoot, and raced her sailboat on Lake Okoboji.  Now she wears flip-flops and sails with her husband, Gerry, on Newport Harbor but wishes there were lightning bugs in California.
Kathleen exists happily with her witty CPA husband, Gerry, in their 70’s poolside retreat in Southern California where she adores time spent with visiting grandchildren, dogs, one bunny, and noisy neighbors.  While proud of their five children who’ve flown the coop, she appreciates the luxury of time to write.


Character Interview from One Night in Havana
What’s your name?
Veronica Keane, but family and friends call me Roni.
Where did you grow up?
New York City
During what time-period does your story take place?
Today.
What’s your story/back story?
You might say I’m a parent-pleaser, but what only child isn’t? My dream is to continue my late father’s research for the octopus’ nervous system by winning the grant at Cephalopod conference in Havana. I’d gain my mother’s respect, but she’d be even more ecstatic if I settled into a marriage and had children.
Why would someone come up with a story about you?
I only appear to be living an opulent lifestyle. Frustration is building. Except for research, my existence is sterile.
What’s your goal in this story?
Will I ever love a man enough to want to be with him for twenty-four hours? After that day is over, will a longing to be together follow or will I go back to my passionless life?
What conflicts are you facing?
I meet my competitor for the grant, Dr. Carlos Montoya. He’s smart, funny, and as ironic as it is, our research intersects.  After a couple of hours of talking and loving, I’ve met my soulmate. He’s a communist. I love my country.
Do you have a plan for resolving them?
What can star-crossed lovers do? Just when I met the love of my life, we’ll have to go our separate ways. How can I make the dream to be with this vibrant man come true?
confroIs there anything else you’d like us to know about you? In spite of the fact Carlos is prideful and somewhat confrontational, I bring out the best in him. He needs a pushy New Yorker like me. She listens to his ranting until the bottom falls out. Trepidation builds inside me, and I don’t know what to expect at the final rewards ceremony.

Blurb from One Night in Havana:
A desperate competition and sizzling attraction leads to dangerous desire.
New York Marine biologist Veronica “Roni” Keane is attending the Havana Bay Conference in Cuba. Tomorrow only one grant will be awarded which will provide the winner with professional recognition, resources for a project, and living expenses for two years. She hopes to continue her deceased father’s work, but smooth operator, Carlos Montoya, has won many grants in the past.


Carlos, a freelancer for the Havana Port Authority, works to help protect Havana’s reputation as a bastion of safety. As international travelers flock to the island, attracted by its 1950’s time-warp and colonial architecture, the drug business is running rampant, particularly on Roni’s cruise ship. Something’s not right, and when her scuba tanks are tampered with, Carlos brings in the military police to investigate. For her safety, he keeps her close, but he craves her body.


Their attraction leads to a fun night with a bit of kink. But Roni finds herself in more trouble than she bargained for when the criminals blame her for alerting the military police and come looking for her. Can Roni trust Carlos to protect her? Will she stay in Havana if Carlos wins the coveted grant, or kiss her lover goodbye? 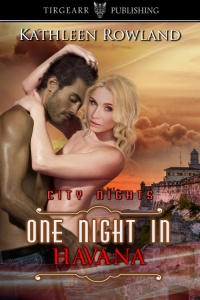 
Buy link for One Night in Havana
Amazon Buy Link


Kathleen will be awarding 3 lucky winners a $10 Amazon Gift Certiticate. Winners will be chosen randomly with Rafflecopter. Please use the Rafflecopter below to enter. Remember you may increase your chances of winning by visiting the other tour stops. You may find those locations here.