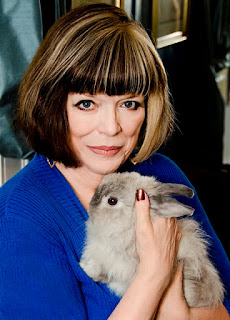 This week author Kay Kendall shares tips on persevering with your writing in the face of discouragement. Kay is a dual US-Canadian citizen who now lives in Texas with her Canadian husband, three house bunnies, and spaniel Wills.
Kay’s Tip on Writing

During my lengthy path to publication, sometimes I set my writing aside. But something kept drawing me back. If I fell off my writer’s horse, I always got back on. Here’s what gave me strength to continue—three lessons I learned that I share in hopes that my experience and pain—yes, it sometimes felt like real pain—can help you avoid some misery and keep going with your writing.
Enjoy the writing process itself. You will spend countless hours learning your craft, practicing it, editing and re-editing the same parts of your manuscript over and over again. If it is torture and you aren’t enjoying yourself, I doubt if happiness lies in that direction. Maybe you fantasize at landing on the New York Times bestseller list, but that’s like dreaming about becoming the next Angelina Jolie. Odds are that ain’t gonna happen. But if something compels you to write and the hours fly by when you are doing it, then listen to and heed your inner voice.
Don’t set a timer. If you look at your calendar today and decide your first book will be published by, say, June 2017, then you may set yourself up for failure. One expert told me the average time a writer takes to publish a first novel is twelve years. Many authors I know took that long, and so did I. Relax into your new writing career. Remember to enjoy the experience.
Post the answer to this question beside your writing space. What is the difference between a published writer and an unpublished one? The published author never quit. 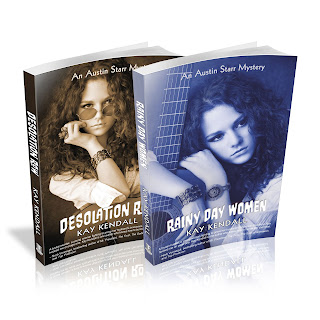 Kay writes the Austin Starr Mysteries series. Austin is a young Texas bride who moves to Canada in 1968. Hit with unexpected culture shock, she learns to cope in the turbulent 1960s by turning amateur sleuth. In the first book, DESOLATION ROW (2013), Austin must prove the Toronto police are wrong in jailing her husband for killing a draft resister. In RAINY DAY WOMEN (2015), Austin tracks down the murderer of women’s liberation activists in Vancouver and Seattle when the Mounties make her friend Larissa a prime suspect.

Excerpt from “Rainy Day Women”
Gary returned with our Molsons. Again he dallied at our table, but this time he gave details about the gossip he’d heard.


“Two officers from the RCMP were in here yesterday to ask about you, Larissa. They wanted to know your habits and what kind of person you are. They wouldn’t say why they were asking, but after they left, guys here got to talking, and someone suggested maybe their questions had to do with the murder at UBC.” He twisted the towel that hung from his belt.
“Thank you, Gary.” Larissa’s voice was composed, reassuring—sounding like the old friend I’d known so well back in Toronto. “I appreciate that you told me. Did they say anything else?”
He shook his head. “That’s all I know. Sorry. I have other customers, but I’ll tell you if they come back in here. Good luck, eh.” He left.
Larissa watched him walk away. “What a nice man. Don’t you think his eyes are extraordinary, Austin?”
“You’re right.” I spoke without stopping to think what her words implied. I was busy trying to think who Gary reminded me of, then I snapped my fingers. “That’s it, Mannix. With his dark hair and kind face, Gary looks like Mike Connors.”

“Who?”
“An actor who plays a private eye on a television show. I forgot you never watch TV.”
“Hmm, maybe.” She still gazed in the direction our waiter had gone. Her eyelids were half shut, and a small smile played around her mouth.
Then her comment about Gary hit me hard, one as unexpected as a compliment from my mother. For the first time in our friendship, Larissa had made a favorable comment about a guy. She was usually so picky.
She took a deep breath, bit her lip, and seemed to come out of her trance. “All right, all right, I’ve got to stop running away from the jam I’m in.” She placed her palms flat on the table and stared straight into my eyes. “What do you want to know about the murder? Now I’m ready to talk.”
Waves of relief washed over me. Larissa had come to her senses at last. Here I’d been dreading having to get her comfortable with talking, and good old Gary had somehow provided the key to unlock her reserve.


Thanks Kay, for dropping by and sharing that great marketing tip.


Don’t forget to check back next week for another author’s tip or tweak.
Posted by darkwriter at 10:46 PM