Sorry this is a little late. My guest for today didn't make it.
So, you're stuck with me, Beverley Bateman today with my tip.
Beverley sits on her deck lakeside, among the orchards and vineyards in BC, Canada and writes thrillers and romantic suspense where it's only a step  from caring to killing.

Beverley's Tip on Writing
My writing tip is an old one. One I'm sure everyone knows, but it bears repeating. If you want to be an "author" you have to finish a book first. To do that you have to write every day.
Yes, I know you're a mom, you're working, it's a stressful job and long hours, you have a family to care for; family and friends are visiting and the list goes on. We all have plenty of excuses, including me. But - if you want to be an author - you write every day.
Debbi Macomber once said, when she was talking about Setting and Meeting goals, everyone has two hours in a day. It could be watching TV, or sleeping through it, doing laundry, whatever, but you have it. People get up twenty minutes earlier in the morning to get their writing in.
A few years ago, when I couldn't find time to write, a writing friend said to me, "have you got five minutes?"
Well, of course I could find five minutes, but that's not time enough to write anything. I mean, how much can you get done in five minutes?
She said, you can't always find those big chunks of time, like an hour or two, to sit and write. Take the short spurts. At least you're writing. She made me accountable and every day I wrote five minutes and let her know.
The funny thing was, when I knew I only had to write for five minutes I often ended up writing more, ten minutes, then fifteen and in the next ten days I'd finished a chapter, writing short chunks.
If I have a big chunk of time - great, but if not, at least I can write my five minutes and I know I've written every day.
Other people I know do the same thing. They write a few minutes during a lunch break, a few minutes in the dentist's waiting room, a few minutes during a soccer practice. Some people get up earlier and write then. The important thing is to write. It can be hand written or on computer, but write every day.
Do you write every day?
If not, maybe find someone to make you accountable and try to write for just five minutes - every day. 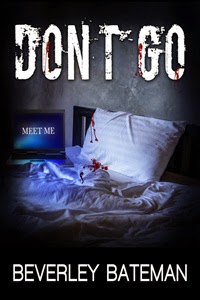 “Please, please don’t do it. You have no idea what might happen to you.” Her voice was barely a whisper as Sam stared at the computer monitor screen in front of her. Eyes glistening, she blinked rapidly as she sat in her office, pleading with the unknown girl in the chat room. The girls didn’t usually take off like this.  Most of them at least gave a hint if they were going to meet someone they from a chat room.


After scanning quickly through all the messages posted in the internet chat room Sam squeezed her eyes shut and clenched her fists. Chewing on her lower lip, she kept her back to the door. She couldn’t let any of the guys see how much losing one of these girls affected her.  She was a cop, not some bloody social worker.
“Damn it. Where the hell is she?”


Detective Samantha Brennan pounded her fist on the desk, then continued shoving her mouse around, clicking determinedly as she scanned the cyber chat room one more time. “She can’t have gone to meet him. Shit. I can’t lose another one. She has to be here somewhere.”


Lips pursed, eyebrows crinkled together, Sam leaned forward trying to see through the screen. “Come on, come on, Invisible-Melissa, check- in please. Don’t take off to meet him. He’s not who you think. You have no idea what this person might do to you.”


Desperation wrapped around the uniformed woman like an iron boa, encasing her fear and anger, then squeezing so she could barely breathe.


Her hand moved quickly. Invisible-Melissa hadn’t been in the damn chat room all day and now it looked like Searching for You was also missing. “Shit. That’s probably who she’s gone to see. What’s happening? What did I miss? Damn it. These kids should know you never go and meet some stranger you’ve only talked to on line. They should have learned that you don’t talk to strangers when they were in the sandbox.”


Icy fingers scraped down Sam’s spine, scratching each vertebra with razor-sharp blades. The gnawing in her stomach screamed something wasn’t right. Leaning back in her chair Sam felt her forehead squeezing against her skull as she continued staring at the screen. The pressure, shoving against the nerve ends, shot barbs behind her eyeballs.


“How could I have missed this one? Damn it.” Punching her right fist into her left palm a few times Sam kept shaking her head. “Damn it. Damn it.”


More oaths slipped between her lips as the memories crept insidiously out from the dark corners of Sam’s subconscious, spinning a cocoon around her; dragging her back into the dark, tangled web of her past.


The sickening sweet smell of his overpowering after shave snaked up her nostrils; his fat, sweating palms grasping at her thighs; knowing what was going to happen, unable to scream, unable to escape ...


The images roared over her, scattering the years of counseling like broken shells on a beach, and covering her soul with the spray of desperation. Despite the air-conditioning, sweat trickled down the center of her back.


Swiping at a tear, perching in the corner of her eye, Sam forced the images back into the darkness, back into the locked box. White-knuckling the back of the chair in frustration, she clung tightly to the metal frame, to prevent herself from throwing the damn computer against the wall.


“Shit! I should have seen it coming. Where the hell are they?” Kicking her chair away from the computer Sam spun around to face the door. Chewing on her lower lip again, she tried to keep the despair from spilling over and becoming waterworks.


Finally pulling herself to an erect position she dragged her body out of the Washoe County Sheriff’s computer room. Pausing in the doorway, Sam rotated her shoulders backwards several times, then rubbed her temples with her fingers, trying to exorcise the memories of what this girl would go through if she’d gone to meet that creature. Another sigh slipped out into the squad room.


“You okay?” Pete Sandusky nodded in her direction as Sam headed toward the day old thick brown syrup the office laughing called coffee.


The acrid, slightly burnt odor of chicory and rancid coffee beans made her wrinkle her nose before she even reached the coffee maker. Shaking her head, Sam poured a half a cup of the sludge, resting her butt against the table where the coffee pot sat. “No. Not really.”


Wrapping both hands around the cheap souvenir mug with the cracked handle she stared across at Pete.


Pete was a good cop. He’d been there about twenty years and looked everyday of it. Grey fringe around a shiny pate, round gold rimmed glasses perched on a short flat, boxer-type nose and an inner tube that had settled around his waist under the dark green Washoe County Sheriff’s uniform.


Most of the time, she had her past under control. The memories only popped up at times like this, or if she ever tried to have a real relationship with someone.


“It’s just a feeling I’ve got.” Taking a sip of the disgusting liquid she stuck out her tongue. “Yech. Why doesn’t someone throw this crap out?”


“I think I’ve lost one of the kids from the chat room. She’s missing. She’s not online.”


“Sure her parents haven’t just cut off her computer privileges?”


“No, I don’t think so. She’s been saying the usual teenage girl stuff. She doesn’t fit in, doesn’t have any friends, all the typical teen angst about her parents not understanding her. This other guy, who says he’s sixteen and is probably at least thirty, keeps saying he understands and is going through the same problems at home and school. The bastard has been playing to her weaknesses, leading her on, trying to get her to meet him. I’m afraid he might have convinced her to do just that. She’s been off line since last night.  I think she’s on her way to a meeting with him as we speak; if she’s not already there. Damn it. I should have seen it coming.”


“Well, I should have picked up on this one.” Sam edged her way across the room through the aisle between the four metal desks, still clutching the coffee mug in both hands.


Each Detective had a desk, a phone, and a computer, but absolutely no privacy. In the new order of the office community, they called it white noise, but it still meant no privacy. So there were always phones ringing, air conditioners or heaters whirring, and computer keys clicking.


After being promised a new building for years it had finally happened, but Sam still hadn’t got accustomed to the new surroundings. The ash color of the walls and the grey and cerulean blue of the utilitarian carpet felt cold and edgy, instead of the calming atmosphere the decorator probably had in mind. Even though there was now actual room to walk across the room without fear of impaling oneself on a corner of one of the desks, habit dictated that she shimmy her five feet eight inch, slender frame between the desks.


All the Detectives were out on calls so the room was quiet at the moment. Other times when four people were on the phone it sounded like a crowded theater lobby.


Pete shook his head, “Know who the kid is?”


“No. I can probably trace her, but it will take a few hours. I should have done that before, but most of the time they don’t actually leave the chat room to meet the bastard.”


Reaching the window Sam stared vacantly through the smudged glass panel into the outside training area below. A fire truck was in front of the tower the firemen used for training and practice. Three men in the Reno Fire Department uniform stood by the truck discussing some aspect of the training or maybe just talking about where to get a drink after work. They all wore their uniform jackets to protect against the fifty-five degree, chilly, May weather. The dark, clouds hanging low over the center added a grey tinge to an already depressing day. The forecast was for more showers.


Sam’s shoulder sagged as she continued staring at the men, but not really seeing them anymore. She tried to visualize where an unknown teenage girl might be heading. Heading toward a man, probably a pedophile, she didn’t know and thought was a boy. Heading toward a life changing experience that she didn’t expect and maybe one she wouldn’t survive.


Best case scenario Invisible Melissa would meet the guy for coffee and decide that home was better after all and come back. That happened with the majority of the cases. The worst case scenario was the hard core pedophiles and if he was one of those….. Sam didn’t want to think about that scenario.
Buy Links for "Don't Go":
Amazon http://amzn.to/1whWek8
Kobo http://store.kobobooks.com/en-CA/ebook/don-t-go-3
Google Play https://play.google.com/store/books/details/Beverley_Bateman_Don_t_Go?id=akbdBAAAQBAJ&hl=en or  http://bit.ly/10g0BT6
itunes https://itunes.apple.com/us/book/dont-go/id931554378?mt=11
Nook http://bit.ly/1tG0jBB

Don't forget to drop by next week for another tip or tweak.
Posted by darkwriter at 9:20 AM