Our guest author today is Kaye Spencer, who is going to share some tidbits about the writing of her book that no one knows--until today.


Kaye Spencer, also writing as A. L. Debran, creates steamy romances from her basement hovel in a quiet little neighborhood in the far southeastern corner of rural Colorado. While drawn to cowboys and the Old West, all genres are within her story-crafting realm. She is afflicted with ACD—accumulative cat disorder—to the dismay of her two dogs and her husband. Kaye is also a review editor for 'Joyfully Reviewed'. Kaye retired in June of 2013 from a long career in education is enjoying being a full-time writer and spoiler of grandchildren.
‘In the Cards, the Vampire Oracle – Life’
1. ‘In the Cards, the Vampire Oracle – Life’ is one vampire story in a common-themed, yet individually stand-alone set of 20 stories by 20 different authors. We each had an oracle card to write about with different images that became the cover of each story. While the stories are not inter-linked, the last story in the group ties them all up in a nice tidy package.
2. I wrote this story within the publisher’s predetermined set of rules for their vampire world. It also had to be 20k or under in word count.

3. I spent several years in the thoroughbred horseracing business, and the hero, Jax, owns and operates a thoroughbred racehorse boarding/training facility patterned after the one I worked at for three years in Ohio to supplement my income during the off-season.

4. Jax also has a horse transporting business. He drives one of the routes I drove many times during my racing years when hauling horses to various tracks.

5. The riding accident that occurs in this story is real. It happened to me. I just took it a step farther and made it a life and death situation for the story. 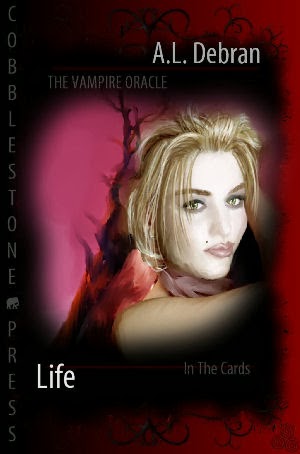 BLURB for ‘In the Cards, the Vampire Oracle – Life’

For over three centuries, vampire Melissa (Lissa) Price has never given her heart away. To her, humans mean only sex, sustenance, and occasional companionship without personal involvement. Cowboy Jaxon Granger is a womanizing chauvinist who uses women for physical pleasure and shuns emotional commitment. When destiny brings Lissa to Jax’s racehorse boarding facility for her skills as a veterinarian, there’s no going back to their former self-defeating and emotionally isolating habits. With love growing and unresolved issues in their pasts demanding confrontation and resolution, each must come to terms with the hurts that run deep within their hearts.

TO BUY  In the Cards, the Vampire Oracle, Life -go to http://tinyurl.com/l2epqws