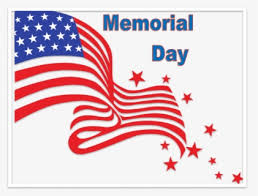 Last week I blogged about Victoria Day, the Canadian long weekend.  This week it's the American long weekend, so once again I checked with Wikipedia, my favorite resource to find out about Memorial Day.

Memorial Day was previously called Decoration Day. This name is seldom used now. It is a federal holiday in The United States for honoring and mourning the military personnel who have died in the performance of their military duties while serving in the United States Armed Forces. The holiday is observed on the last Monday of May. Previously the holiday was observed on May 30 from 1868 to 1970.

Many people visit cemeteries and memorials on Memorial Day to honor and mourn those who died while serving in the U.S. Military. Many volunteers place an American flag on graves of military personnel in national cemeteries. Memorial Day is also considered the unofficial start of summer in the United States.

The Veteran of Foreign Wars (VFW) and Sons of Union Veterans of the Civil War (SUVCW) advocated returning to the original date.

Changing the date merely to create three-day weekends has undermined the very meaning of the day. No doubt, this has contributed a lot to the general public's nonchalant observance of Memorial Day.

In 2000, Congress passed the National Moment of Remembrance Act, asking people to stop and remember at 3:00 pm.

On Memorial Day, the flag of the United States is raised briskly to the top of the staff and then solemnly lowered to the half-staff position, where it remains only until noon. It is then raised to full-staff for the remainder of the day.

The National Memorial Day Concert takes place on the west lawn of the United States Capital. The concert is broadcast on PBS and NPR. Music is performed, and respect is paid to the people who gave their lives for their country.

Across the United States, the central event is attending one of the thousands of parades held on Memorial Day in large and small cities. Most of these feature marching bands and an overall military theme with the Active Duty, Reserve, National Guard, and Veteran service members participating along with military vehicles from various wars.

Scholars, following the lead of sociologist Robert Bellah, often make the argument that the United States has a secular “civil religion” – one with no association with any religious denomination or viewpoint – that has incorporated Memorial Day as a sacred event. With the Civil War, a new theme of death, sacrifice, and rebirth enters the civil religion. Memorial Day gave ritual expression to these themes, integrating the local community into a sense of nationalism. The American civil religion, in contrast to that of France, was never anticlerical or militantly secular; in contrast to Britain, it was not tied to a specific denomination, such as the Church of England. The Americans borrowed from different religious traditions so that the average American saw no conflict between the two, and deep levels of personal motivation were aligned with attaining national goals.

In 1915, following the Second Battle of Ypres, Lieutenant Colonel John McCrae, a physician with the Canadian Expeditionary Force, wrote the poem, "In Flanders Fields". Its opening lines refer to the fields of poppies that grew among the soldiers' graves in Flanders.

In 1918, inspired by the poem, YWCA worker Moina Michael attended a YWCA Overseas War Secretaries' conference wearing a silk poppy pinned to her coat and distributed over two dozen more to others present. In 1920, the National American Legion adopted it as its official symbol of remembrance. 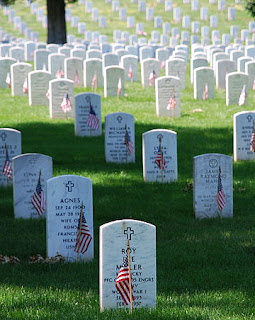