Kayelle Allen and Her New Release 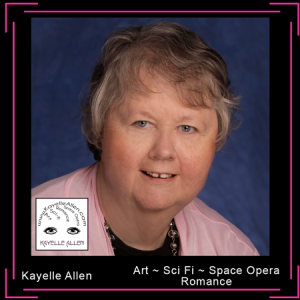 Kayelle Allen writes Sci Fi with misbehaving robots, mythic heroes, role-playing immortal gamers, and warriors who purr. She is the author of multiple books, novellas, and short stories. She's also a US Navy veteran and has been married so long she's tenured. Sign up for her newsletter and get free Sci-Fi stories, book recommendations, and become a Tarthian Empire citizen (and an immortal), among other reader exclusives. https://kayelleallen.com/immortality

Character interview with Izzorah Ceeow Saint-Cyr as told to Kayelle Allen (Izzorah can't read/write in our language, though he can speak it).

Izzorah: I'm Izzorah Ceeow Saint-Cyr. I'm so excited to add that last part. I just married Luc Saint-Cyr and he's the most amazing person. Do you know him? I could introduce you.

Kayelle: Where did you grow up?

Izzorah: My homeworld is Felidae, and my people are called Kin. We look a little different from humans, but that's okay. It must be hard not having ears that let you tell others what's on your mind. We use ohtikshah (ear language) and can relate all sorts of information. Like if you see us lay our ears all the way back, flat against our heads, we're not happy. If they're up and facing you, we're interested. There are lots more. I wish humans did have decent ears. It would be a lot easier to understand you. I have oval pupils, like a human cat. (I think Izzorah means a domestic cat that humans have for pets.) And, what else... Oh, and claws that hide under my fingernails. So my hands look like yours unless I flex my claws. Fangs, but not like a vampire or anything. Ours are smaller. If you saw us barefoot you'd see we have claws on our feet. To me, human feet look weird. No offense. I'm just surprised you can walk with those things. And how do you climb trees? I feel a little sorry for humans, but that doesn't mean I don't like you.

Kayelle: During what time period does your story take place?

Izzorah: I had to ask Luc about this. He says it's 4664 Tradestandard. I have no idea what year that is on my world. We have 450 days in a year and Tarth (where I live now) has 360. It gets confusing. Oh, and he said it's about 15 thousand years ahead of where you are now.

Kayelle: What's your story/back story? Why would someone come up with a story about you?

Izzorah: Kayelle says she wanted to give Luc a story, because he had broken up with Wulf, and he was depressed, so she came up with me. In reality, she just taps into our world and we let her share our stories with people. We're real, you know.

Kayelle: What's your goal in this story?

Izzorah: I have to pass a special test. Luc's people call it a fealty test -- which means loyalty. It's a do or die situation and I don't have a choice in whether to do it.

Kayelle: What conflicts are you facing?

Izzorah: I have to find items hidden around the city, while evading a group of hunters whose job it is to stop me anyway they can. Kayelle says I can tell you this -- we're immortal, and these hunters will even kill me if that's what it takes. I'll come back to life, but who wants to die and go through all that pain? The others say that rebirth is agony. I'll have to deal with it someday, but for now, I want to avoid it. If I don't pass the test, I'll be thrown out of the empire. It's scary thinking about it. If I pass, I'll be accepted into the strongest group of immortals in the galaxy.

Kayelle: Do you have a plan for resolving them?

Izzorah: Oh, yes. Luc has trained me and we have some plans that I can't tell you about. But right now, one of the immortals who is supposed to hunt me isn't here, and he's someone everybody seems to either hate or fear. He's what Luc calls a wildcard. So I hope that works out!

Kayelle: Is there anything else you'd like us to know about you?

Izzorah: That I'm crazy in love with Luc, and I'm excited I get to spend my life with him. Oh, Kayelle says I should mention this too. My people have kahlah, the ability to smell emotions. Mine is better than most, which Luc says is because I was enhanced before birth, which also made me immortal. Anyway, you can't lie to a Kin. We smell lies almost before you say them, and I can read every change while you're making a decision. Took years before I realized my ability wasn't like other people's. But that ability also made me a target in a way. Kayelle says you'll have to read the story to find out about that. I'm glad she told my story, because it's also about Luc, and I am very proud of him. I call him t'hahr, which means my heart. Because he totally is. 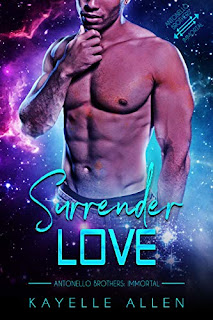 Luc is the most powerful man in an intergalactic empire of 22 planets—but he's alone, life after life.

Izzorah survives by hiding both his illegal status and his blindness for fear of banishment.

Luc might risk violating the highest law among the immortals by sharing his blood, but it means revealing the truth of what he is, and that means baring every damning secret, every twisted truth, and twelve thousand years' worth of dirty hidden lies.

With no guarantee their love can survive that kind of truth...

Posted by darkwriter at 9:19 PM