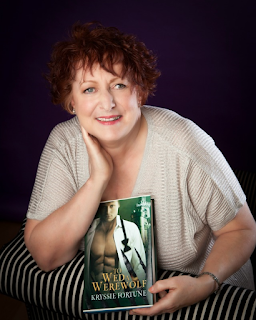 Kryssie likes her contemporary heroes ex-military and dominant. Her heroines are kick ass females who can hold their own against whatever life - or Kryssie - throws at them.


Kryssie's pet hates are unhappy endings, and a series that end on a cliff hanger.
Her books are all stand alone even when part of series. Plot always comes before sex, but when her heroines and heroes get together, the sex is explosive and explicit. One review called it downright sensual.

Kryssie is giving away a $10 Amazon Gift Certificate and 3 ebooks of Submission, Secrets, and the Soldier to lucky winners during the tour. Please use the Rafflecopter below to enter. Remember there is a chance to enter every day, so please follow us along on the tour. You may find the tour locations here.

About the Boxed Set:
Kryssie Fortune's holiday series, Heroes of Westhorpe Ridge, is now available in a convenient e-boxed set!

Marriage, Mobsters, and the Marine:

Jared Armstrong, a former Marine sharpshooter and occasional Dom needs $125,000 to get his family out of a hole. His solution--to marry Abigail Montgomery for her money. His only regret is his wife won’t accept his spanking lifestyle.
Gradually, Abigail comes to dream of making their marriage real, but she promised Jared a divorce two years after their wedding. Can they share some Christmas magic as their relationship faces extortion threats, a kidnapping, and an attempted murder? Or will Jared break her heart when he walks away?

Sex, Scandal, and the Sheriff:
Jasmine Stewart (Jazz to her friends) falls for the blond stranger when he spanks and seduces her at a Washington soiree. Later, when she discovers her flatmate is trying to draw her into a spy ring, she goes to the authorities. The ensuing publicity costs her her job, her security, and her future. Starting over in Westhorpe Ridge is her only option.
Sean Mathews, former SEAL and Westhorpe Ridge’s sheriff, can’t forget the woman he spanked when he visited Washington, but he thinks she’s a spy. When she turns up in Westhorpe Ridge, he tries everything to make her leave town. Despite their misunderstandings, though, they can’t keep their hands off each other.
As Year’s Eve looms, the spy ring resurfaces. Jazz will need all of Sean’s SEAL prowess to survive. But because his wounded leg cost him his speed in the water, will it be enough?
Desire, Deceit, and the Doctor:
Twelve years ago, Mandy Devlin moved away from her friends and family--under threat. If she returned in the next ten years or told anyone who fathered her baby, her boyfriend’s great-aunt would bankrupt her family. She’s a single mom who dreams of her lost love and a good spanking. When she’s finally free to return to Westhorpe Ridge, the last person she expects to see is Adam--the man she loved and lost so long ago.
Dr. Adam Montgomery doesn’t know he has a son. Thanks to his great-aunt’s will, he has nine months to find a bride or he loses Montgomery Hall and the fifteen million dollars she left him. Although he seduces Mandy on his first night home, he still believes she betrayed him twelve years ago. No way would he marry a woman like her.
As Valentine’s Day looms, someone tries to kill Mandy. Is Adam trying to get rid of her? Or can Mandy trust him to protect them?
Note: All of the books in this set were previously released as single titles.
Buy Links:
Amazon UK | Amazon US | Loose id | Kobo | B&N
Excerpt from Marriage, Mobsters, and the Marine:

Abigail gazed Jared’s his face, her eyes still awash with tears. “Okay, but I expect you to tell me what’s going on. Who were those men? And why did they destroy your truck?”


He slid out from under her, brought a sponge, and gently wiped her face. Once he’d dried her cheeks, he pulled her back onto his knee. “I need to tell you about those personal reasons I mentioned when I accepted your proposal.”


Abigail didn’t speak, just rested her head on his shoulder and snuggled closer. He liked the way seemed ready to move forward. “My cousin’s life is a mess. A few years ago she married a small-time crook with a bad gambling habit, but she didn’t deserve to watch the mob murder him over his debts. She’s agreed to testify against them and go into the witness-protection program. The mob still wants their money, and they threatened to go after her mom and dad, always assuming they could find them. My aunt and uncle are off exploring the Amazon basin or something.”
Abigail listened intently. When he paused for breath, she shook her head. “The mob? The Amazon basin? It sounds like B-movie plot to me. Just throw in a few killer tomatoes.”
Jared held her tight against his chest. “The phone call earlier was from my cousin. Since the mob can’t find her parents, they’ve decided to come after me. Destroying my truck was a warning. Here’s the thing… You know I married you because I needed money. I wanted pay them off and keep my unsuspecting family safe, but I’ll be damned if I’ll pay protection money to keep them away from me. They’re parasites who won’t leave until they’ve taken everything I hold dear. I’m only sorry I sucked you into my mess.”
She hiccupped against his shoulder. “So what happens now?”
He almost stroked her wire-wool hair but thought better of it. “I don’t suppose you’d take a month’s holiday somewhere?”
She sat up, her eyes gleaming with anger. “No way will I abandon my class. We’ve got Christmas projects to finish and the nativity to rehearse. I try to make everything special for them, with it being their last year before they move on to junior high. I’ve already bought them all individual Christmas presents. In between that, we’ll be measuring daylight hours and checking the shadows at midday. Hopefully our solstice project will help them get their heads around shortening days.”
He felt ready to argue but said nothing.