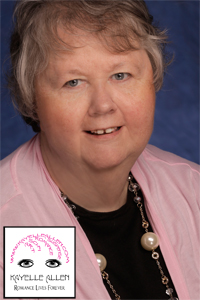 This week we’re going to find out a little about author Kayelle Allen. April‘s theme is ‘Covers’ so Kayelle will be talking about book covers. She’ll also tell us a little about herself and her writing, and answer some fun questions.
And I'd like to apologize to Kayelle, because I messed up a couple of her answers in the middle of this blog. But they are fixed now.
Kayelle Allen is a best-selling American author. Her unstoppable heroes and heroines include contemporary every day folk, role-playing immortal gamers, futuristic covert agents, and warriors who purr. She writes Science Fiction, Science Fiction Romance, Mainstream Fantasy, Contemporary Romance, Holiday Romance, Gay Romance, and non-fiction. She is a current nominee for the 2016 Ariana Cover Art Award, the winner of the 2010 EPIC award for Science Fiction and the 2008 Honorable Mention for Science Fiction Fantasy. Kayelle likes to attend Science Fiction conventions and has been a speaker at DragonCon, GaylaxiCon and NerdaCon. She holds an honorary lifetime membership to OutlantaCon, an Atlanta Scifi convention where she is often a panelist. Kayelle is the founder of the author-mentoring group Marketing for Romance Writers and manages the successful Romance Lives Forever blog, where readers can meet authors and find new books every day. 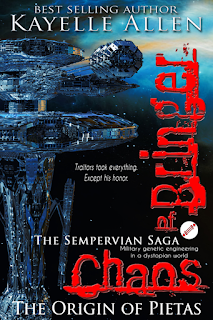 Blurb for Bringer of Chaos: the Origin of Pietas
The immortal Pietas leads the fight against his people's oppressors: humans. To end the war and save his kind, he agrees to exile. But when he submits, he's betrayed and imprisoned within an unpowered lifepod. His unlikely ally is Six, a human. Though Six captured Pietas, he had no part in his betrayal. Together, they must cross an alien world and find the other Ultras. That is, if they can overcome their desire to kill one another...

Blurb for Forged in Fire
A step beyond human, the Ultra known as Pietas inspired fear in humanity, but his scientist side instilled terror. Detractors among his kind betrayed him and humans isolated him and half a million of his followers on an alien world. Left without food, shelter, or a means of escape, death would be imminent for anyone else, but no matter how many times Ultras die, they come back. On the planet Sempervia, with its lack of resources, death will not be a mercy. Immortality breeds endurance and a good soldier is endurance made flesh. But how much pain can a soldier--even an immortal one--endure?

Buy Links:
You can find all of them on my books page. https://kayelleallen.com/books/


Don’t forget to check back next week for another author interview and next week we’re talking about Heroine’s.
Posted by darkwriter at 10:09 PM