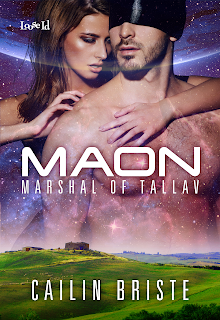 This week we’re going to find out a little about author Cailin Briste. April‘s theme is ‘Covers’ so Cailin will be talking about book covers. She’ll also tell us a little about herself and her writing, and answer some fun questions.
Cailin has been writing fiction for five years and non-fiction for two decades. Her non-fiction work has been published in magazines and in a non-fiction anthology. She’s a member of Romance Writers of America, the RWA Fantasy, Futuristic and Paranormal Chapter, and the RWA Passionate Ink Chapter.


Maon Keefe has always been told he’s doomed to fail as a husband. He decides never to marry instead focusing on living life as a player and becoming a capable marshal of Tallav. When he is shot and the most-wanted criminal he’s escorting escapes, he fears that his career, his one success in life, is doomed. Assigned to ferret out the cause of missing shipments for a VIP aristocrat, he meets Selina Shirley CEO of the House of Shirley. He finds himself inexplicably attracted to her despite her frumpy appearance. When he meets a hooded and masked, scorching hot Domme, Lasair, at his friend’s BDSM club, he’s torn between the two women. Both fire his imagination and call to his submissive nature. Either might be the woman to change him into successful husband material. Selina Shirley organizes her life like she organizes her business, taking control of all aspects of each. She’s concluded that she must marry to get an heir and that her future husband must be totally submissive. Mentored by the sector’s most famous sadist, she learns what it takes to be a proper Domme. Then, hidden behind a hood and mask, as Lasair, she meets Maon and her instant attraction to his full submission at the BDSM club leads her to break her own rules and become involved with him. But he’s also the marshal assigned to investigate thefts at her company. When his broad streak of protective alpha male comes into play, it obvious he’s not a 24/7 submissive. To stick to her plan to marry the perfect husband, she must ignore her heart and dump Maon.
Buy Links:
Loose Id http://www.loose-id.com/marshal-of-tallav-maon.html
Online Retailers http://books2read.com/maon/
Goodreads https://www.goodreads.com/book/show/33292910-maon


Don’t forget to check back next week for another author interview and more discussion of book covers.
Posted by darkwriter at 10:31 PM