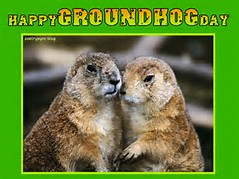 Ground dog is celebrated on February 2nd. According to folklore, if it is cloudy when the groundhog emerges from its burrow on this day, then spring will come early; if it is sunny, the groundhog will supposedly see its shadow and retreat back into its den, and there will be six more weeks of winter.


Groundhog Day was adopted in the U.S. in 1887. Clymer H. Freas was the editor of the local paper Punxsutawney Spirit at the time, and he began promoting the town’s groundhog as the official “Groundhog Day meteorologist”.


Modern customs of the holiday involve celebrations where early morning festivals are held to watch the groundhog emerging from its burrow.


In southeastern Pennsylvania Groundhog Lodges celebrate the holiday with social events in which food is served, speeches are made, and one or more plays or skits are performed for entertainment. The Pennsylvania German dialect is the only language spoken at the event, and those who speak English pay a penalty, usually in the form of a nickel, dime, or quarter per word spoken.


America's most iconic weather forecaster, the Pennsylvania groundhog Punxsutawney Phil, "told" the president of the groundhog club spring is coming after not seeing his shadow at Gobbler's Knob in the town northeast of Pittsburgh after he emerged from his burrow shortly after 7:20 a.m.


In Canada, the first of North America’s famed, four-legged forecasters, given Nova Scotia’s time zone, Shubenacadie Sam didn’t see his shadow this morning as he scurried from his tiny shed at a provincial wildlife park northeast of Halifax. Although it was a brisk morning, a sign stuck in the snow outside Sam’s shed reading, "Yay! I didn't see my shadow," making it clear Sam expects warmer weather to be on its way.


Ontario’s Wiarton Willie issued his long-term forecast later today as his community celebrates the albino woodchuck’s 60th anniversary. “Well, for those hoping for 6 more weeks of winter… you’ve got your wish. I saw my shadow,” the groundhog declared on his official Twitter account.


But this year’s festivities have already been marred by the death of Sam and Willie’s westerly counterpart Winnipeg Willow. Groundhog Day celebrations have been cancelled in Manitoba due out of respect for Willow, who died last Friday at the Prairie Wildlife Rehabilitation Centre.
Posted by darkwriter at 4:39 PM