Muse It or Lose It 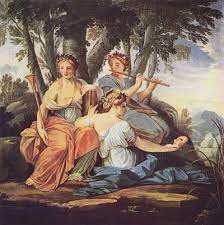 Do you have a muse? Is it there when you need it?


People talk about their muse, but I’m not always certain I have one. Sometimes it takes a vacation and I can’t find it. Was it because I wrote too much and it got tired? Was it because I hadn’t been writing for a few days and my muse decided it wasn’t needed and wandered off. I think Stephen King answered this one.


The original Muses are the nine daughters of Zeus and Mnemosyne [Memory]. Zeus came to Mnemosyne on nine consecutive nights and the nine daughters were the result of those nine unions. They were Erato Love Poems; Euterpe Flute Playing; Kalliope Epic Poetry; Kleio History; Melpomene Tragedy; Ourania Astrology; Polymnia Sacred Music; Terpsichore Dance; Thaleia Comedy. All nine girls are of one mind … they are free spirited and have their hearts set upon song … they sing of the laws of the Immortals and the goodly ways of a life. Their homes and bright dancing places are on Mount Olympos but they may appear to anyone as long as the performer is paying tribute to the immortal gods with their art.
J.D. Robb said of muses,   "You're going to be unemployed if you really think you just have to sit around and wait for the muse to land on your shoulder." http://en.wikipedia.org/wiki/Nora_Roberts


Stephen King has a similar, but slightly different view. “There is a muse, but he’s not going to come fluttering down into your writing room and scatter creative fairy-dust all over your typewriter or computer. He lives in the ground. He’s a basement kind of guy. You have to descend to his level, and once you get down there you have to furnish an apartment for him to live in. You have to do all the grunt labor, in other words, while the muse sits and smokes cigars and admires his bowling trophies and pretends to ignore you. Do you think it’s fair? I think it’s fair. He may not be much to look at, that muse-guy, and he may not be much of a conversationalist, but he’s got inspiration. It’s right that you should do all the work and burn all the mid-night oil, because the guy with the cigar and the little wings has got a bag of magic. There’s stuff in there that can change your life. Believe me, I know.” http://www.goodreads.com/quotes/414722-there-is-a-muse-but-he-s-not-going-to-come


He also said “Don't wait for the muse. As I've said, he's a hard-headed guy who's not susceptible to a lot of creative fluttering. This isn't the Ouija board or the spirit-world we're talking about here, but just another job like laying pipe or driving long-haul trucks. Your job is to make sure the muse knows where you're going to be every day from nine 'til noon. or seven 'til three. If he does know, I assure you that sooner or later he'll start showing up.” http://www.goodreads.com/quotes/681212-don-t-wait-for-the-muse-as-i-ve-said-he-s-a


So I guess my problem these days is I need to set a specific time to write and do it and hopefully my muse will wander back.


What about your muse, if you have one?
Posted by darkwriter at 4:44 PM