I just finished walking one of my dogs. I’ll call her Princess, because that describes her attitude. I took a picture of both my dogs yesterday because they were curled up tightly together on my bed. Of course when I got the camera Princess raised her head and after I took one picture she got up and left.


I took the picture because I thought it was cute, but also someone had asked us while we were camping if our Shiba dogs got along, because they had two and they hated each other. As you can see, they do.


I have two Shiba Inu dogs. You’ve seen their picture on my blog site. Shiba’s are Japanese hunting dogs, from the Akita family, except they are much smaller.  We got Princess first. She’s purebred but too small to be a show dog. We only wanted her as a pet – so we got tiny Princess. Then my husband decided we should have two of them. The silly man thought we’d get another one like Princess. Instead we got Critter, from the same breeder. (We call her several other names too.) Critter was the other end of the spectrum. She’s too big to be a show dog. She's now twice the size of Princess. She’s also a vacuum when it comes to eating, a total klutz, ungraceful (not sure that’s a word), but she's loveable. She loves everyone and squirms all over when anyone comes near her and pets her.


When we were at the Oregon beach Princess loves swimming, and she went charging into the water. Then she took a drink and looked very startled. It was salt water. She’s not quite so excited about the ocean any longer.
We love out dogs and could talk about them for hours. If you have dogs I’m sure you can do. Tell me about your dog, breed or what it’s done that’s cute or funny. I’d love to hear from you. 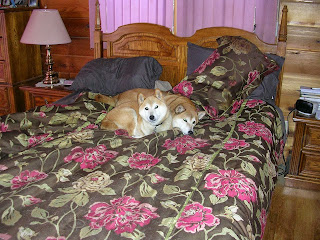 Posted by darkwriter at 7:04 PM