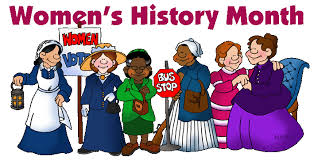 Women's History Month is an annual declared month that highlights the contributions of women to events in history and contemporary society. It is celebrated during March in the United States, the United Kingdom, and Australia, corresponding with International Women's Day on March 8, and during October in Canada, corresponding with the celebration of Persons Day on October 18.

In the United States, Women's History Month traces its beginnings back to the first International Women's Day in 1911. In 1978, the school district of Sonoma, California participated in Women's History Week, an event designed around the week of March 8 (International Women's Day). In 1979 a fifteen-day conference about women's history was held at Sarah Lawrence College from July 13 until July 29, chaired by historian Gerda Lerner. It was co-sponsored by Sarah Lawrence College, the Women's Action Alliance, and the Smithsonian Institution. When its participants learned about the success of the Sonoma County's Women's History Week celebration, they decided to initiate similar celebrations within their own organizations, communities, and school districts. They also agreed to support an effort to secure a National Women's History Week

In February 1980, President Jimmy Carter issued a presidential proclamation declaring the week of March 8, 1980, as National Women's History Week. The proclamation stated, "From the first settlers who came to our shores, from the first American Indian families who befriended them, men and women have worked together to build this nation. Too often the women were unsung and sometimes their contributions went unnoticed. But the achievements, leadership, courage, strength, and love of the women who built America was as vital as that of the men whose names we know so well. As Dr. Gerda Lerner has noted, 'Women’s History is Women’s Right.' It is an essential and indispensable heritage from which we can draw pride, comfort, courage, and long-range vision. I ask my fellow Americans to recognize this heritage with appropriate activities during National Women’s History Week, March 2–8, 1980. I urge libraries, schools, and community organizations to focus their observances on the leaders who struggled for equality –Susan B. Anthony, Sojourner Truth, Lucy Stone, Lucretia Mott, Elizabeth  Cady Stanton, Harriet Tubman and Alice Paul. Understanding the true history of our country will help us to comprehend the need for full equality under the law for all our people. This goal can be achieved by ratifying the 27th Amendment to the United States Constitution, which states that 'Equality of Rights under the Law shall not be denied or abridged by the United States or by any State on account of sex. Carter was referring to the Equal Rights Amendment, which was never ratified, not to the amendment which did become the 27th Amendment to the United States Constitution after his presidency.

Women’s History Month is a time when we can educate ourselves on historic moments women fought for and our progress thus far, along with celebrating women as a whole. And what better way to do that than reading a bunch of books about women by women?

If you are looking for recommendations on biographies that will educate you, comedies that will make your belly ache or stories that encapsulate the unique challenges women face every day, read on. Here’s a website that lists more books to read during Women’s History Month.     https://www.cnn.com/2021/03/01/cnn-underscored/womens-history-month-books

Want to educate yourself in another way as well? Some interesting podcasts to listen to during this month include “The History Chicks” by Beckett Graham and Susan Vollenweider, “Stuff Mom Never Told You” by iHeartRadio and “The Other Half: The History of Women Through the Ages” by James Boulton.

Posted by darkwriter at 8:13 PM