Looking for something to read these days? Check out The Fourth Victim at N.N. Light's Spring Break Bookapalooza giveaway at https://www.nnlightsbookheaven.com/post/the-fourth-victim-sbb for a giveaway. #MFRWAuthor #RomanticSuspense #NNLight 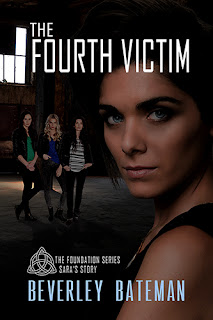 Here's an excerpt from The Fourth Victim:
The four shadowy forms in black crouched low, inching closer to the Shiraz prison wall. Darkness blurred the outline of the prison and its towers. Dense clouds blocked any shard of moonlight from slipping through the ebony night, providing cover for the four. The fall rain had stopped.
The corner search lights swung slowly in a circle, cutting through the darkness. The first form held up a hand. The rest flattened onto the dry terrain. The lights swung back across the area. The total rotation took three minutes.
Two uniformed guards marched past. They followed the perimeter toward the far corner of the tower.
Several seconds after the guard’s past, the shadows raced toward the main road. Two dived to the ground by the side of the road. The other two raced across the road and disappeared into the bushes against the outer prison wall. They slumped down onto the Iranian soil.
After a quick survey of the area, Fareeda, the taller, sturdier figure, stood up. She checked her shoes and adjusted her harness before shooting a light-weight hook, specifically designed by The Foundation, to the top of the wall.
A thud echoed through the silence when it landed. Both women held their breath. There was no response from inside. They exhaled slowly.
Fareeda grabbed the rope attached to the hook and began her climb up the stone surface.
At the call of a heron from the other side of the road, Fareeda paused and flattened herself against the structure. Below her Assif dropped face first to the ground.
Two more guards advanced. They continued past on another trip around the perimeter and disappeared around the corner.
Seconds later Fareeda resumed her upward climb. She stopped briefly when the lights swept past. Three more minutes and it would be back again. She scrambled the last few feet to a small ledge where she swung a second large, grappling hook over the barbed wire. The hook locked onto the edge of the wall. The prisoner could slide down, once Assif rescued her from her cell.
Fareeda grabbed the ropes, swung out from the wall and rappelled down quickly. At the bottom, the shorter, smaller framed person grabbed the rope.
“Your turn, Assif. Be careful,” Fareeda whispered into her headphone. “There are more guards on they said, and the search lights are shorter than reported. Our information isn’t accurate. If she’s not in the cell, rappel down quickly. We can come back later if we have to. We don’t want to get caught in this country.”
Fareeda watched Assif grab both ropes and began her upward scale of the wall. She paused at a small window fifty feet above and peered through the bars.
Another heron cry broke the night.
Four guards marched into the escape area. Searchlights flashed on, focusing on the area.
“Assif, abandon the project! Get down here now!” Fareeda whispered into her headset.
A man’s voice shouted in Arabic. They ran toward Fareeda.
Assif rappelled down in two or three long jumps. She started to run as soon as her feet hit the ground. Over her shoulder Fareeda saw two guards grab Assif. They hit her over the head. Her last view was Assif being pulled toward the prison gate.
Shots rang out.