Check Out Alice Renaud and Music for a Merman

I'm back finally with a great interview with Alice Renaud. (And I'll explain the last week in my next post) 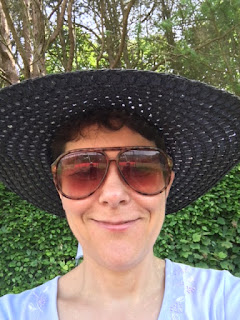 Alice Renaud lives in London, UK, with her husband and son. By day she's a compliance manager for a pharmaceutical company. By night she writes fantasy romance about shape shifting mermen, water monsters and time-travelling witches. Her first book, “A Merman’s Choice,” was published in January 2019 by Black Velvet Seductions. It is the first book in a fantasy romance trilogy inspired by the landscapes and legends of Brittany and Wales. The second book, “Music for a Merman,” is out now. Alice has also written a short story, “The Sweetest Magic of All,” included in the BVS “Mystic Desire” anthology, out now.
Alice loves reading and writing stories and sharing them with anyone who’s interested!

Character Interview with-Charlotte Fitzwilliam (Charlie)
Beverley: What’s your name?
Charlotte: Charlotte Fitzwilliam. Everyone calls me Charlie – except my father, but we don’t talk very often. Which I’m quite happy about. We have a very difficult relationship.
Beverley: Where did you grow up?
Charlotte: Fitzwilliam Castle. A gloomy pile of stones, on my father’s estate. Full of ghosts and bad memories.
Beverley: During what time period does your story take place?
Charlotte: During a few sunny, magical summer days in St-Sulien, on the coast of Wales, UK.
Beverley: What’s your story/back story? Why would someone come up with a story about you?
Charlotte: I have a difficult relationship with my parents. They were always very strict with me, and I think that they preferred my younger brother. I felt that I would never be good enough for them. So I gave up trying. I was always a bit of a rebel. I’ve always cared about nature and wild animals, so when I left home (blessed relief) I became an environmental activist. An eco-warrior. That brought me even more into conflict with my father, because he owns companies that have no respect for the environment and do a lot of damage to beautiful areas.
Beverley: What’s your goal in this story?
Charlotte: When the story starts, I’m in the village of St-Sulien, protesting against a new development there that’s threatening the marine wildlife. I get arrested by a young cop, Rob Regor. I try to convert him to my cause, but end up feeling more and more attracted to him.
Beverley: What conflicts are you facing?
Charlotte: I’m only looking for a fling… Initially. Love ‘em and leave ‘em, that’s always been my motto. That way I can’t get hurt. But Rob is different… Very different in fact! He’s actually a shape shifting merman, but when I discover that, it only makes me fall for him even more. Which is a problem, as he is forbidden from having a relationship with a human woman… and his father hates humans!
Beverley: Do you have a plan for resolving them?
Charlotte: There isn’t really any time to make a plan. Events take a strange turn… And I am changed in ways I could not have imagined.
Beverley: Is there anything else you’d like us to know about you?
Charlotte: All my life I’ve yearned to be close to the ocean, I’m never happier than when I’m near the sea, or better still, in it! I have this recurring dream where I swim and sing with all the other marine creatures. Maybe that’s why I can’t help being drawn to Rob, even though it puts us both in danger. 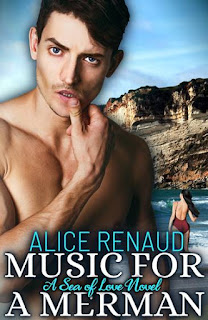 Blurb from Music for a Merman

Rob Regor knew that humans were trouble. All the shape shifting mermen of the Morvann Islands knew it. And human women were double trouble... especially when they were lying on the road in front of a digger.
Rob has a mission. Go to the mainland. Work as a policeman. Spy on humans. Report back to his father, the head of the Regor Merman Clan. It should be easy. Until he has to arrest Charlie. Rob can’t fight his attraction to the sexy eco-warrior, and it puts him on one hell of a collision course with his family and his Clan. Will he break the rules – or break her heart, and his?
Love ‘em and leave ‘em, that was Charlie’s motto. It had served her well until now. But Rob is different… Can she open up her heart to Rob - when a secret buried in her past surfaces and changes her completely?
Buy Links for Music for a Merman
https://amzn.to/2ZkU5wR
https://books2read.com/u/mdG7Bw
Social Media Links:
Facebook: https://www.facebook.com/AliceRenaudAuthorRomance/
Twitter: https://twitter.com/alicerauthor
Linkedin: https://www.linkedin.com/in/alice-renaud-author-4219b6166/
Instagram: https://www.instagram.com/alicerenaudauthor/
Goodreads: https://www.goodreads.com/author/show/18670218.Alice_Renaud
Bookbub: https://www.bookbub.com/profile/alice-renaud
Amazon page: https://www.amazon.com/Alice-Renaud/e/B07L52P17B 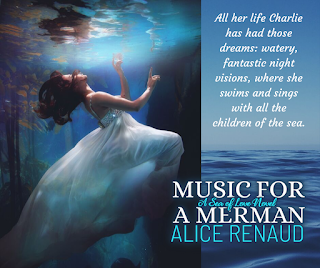 Posted by darkwriter at 8:38 PM