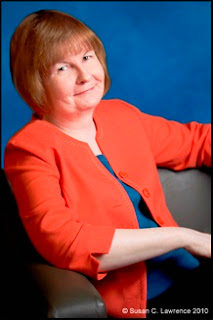 Barbara White Daille lives with her husband in the sunny Southwest. Though they love the warm winters and the lizards in their front yard, they haven’t gotten used to the scorpions in the bathroom. Barbara also loves writing, reading, and chocolate. Come to think of it, she enjoys writing about those subjects, too!
Barbara wrote her first short story at the age of nine, then typed "The End" to her first novel many years later...in the eighth grade. Now she's writing contemporary romance on a daily basis. Sign up for her newsletter to keep up with the latest in her writing life:  https://barbarawhitedaille.com/newsletter.

Thanks to Beverley for inviting me back to the blog!
As we’re approaching the winter holidays, I’m sharing a bit about One Week to Win Her Boss. The book is a sweet romance set in Snowflake Valley, which—as you’ll see below—is a tiny tourist town dedicated to celebrating Christmas.

Book Blurb from One Week to Win Her Boss:
Single mom Amber Barnett loves family, kids, Christmas…and unfortunately, her boss, confirmed bachelor Michael DeFranco. It's a crush she really needs to get over. Except, when she’s temporarily forced from her apartment, her only option is to stay at Michael’s private ski lodge, where she's the housekeeper. No problem. Her handsome boss rarely visits Snowflake Valley unexpectedly, plus he’s spending the holidays with his family. Or so she thinks…
A stormy Christmas Eve reunion leaves Michael seeking the solitude of his lodge, where he finds Amber in residence—and in trouble. Attempting to save her from her matchmaking family, he announces they’re a couple. His good deed backfires when they’re instantly included in each and every holiday event in town. So much for solitude.
Only the more time he spends with the beautiful, cheery brunette, the more he yearns to make things real between them. But he and Amber want different things, and Michael could never be the family man she's looking for. 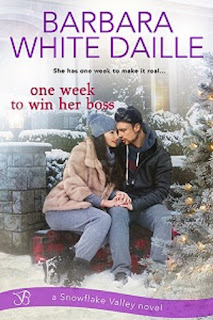 From the book:
Amber stared down at her coffee. “I was sorry you had to back out at the last minute. You would have made a great Santa yourself.”
“Santa? Me?” Michael laughed. “Bah, humbug.”
His mocking tone surprised her. “You are a Scrooge, aren’t you? That’s so sad. Christmas is my favorite holiday.”
“Good thing for you, since there’s no getting away from it around here.”
She smiled wryly. “I can’t argue with that. Not when I live and work in a town called Snowflake Valley. As Mayor Corrigan would tell you”—she attempted to mimic his deep voice—“‘three-hundred-and-sixty-five days a year, we cater to tourists celebrating the season.’ But you have to admit Christmas is a magical time. And I’m glad that magic brought Santa and Miss Elf their happy-ever-after.” The fact that Miss Elf was her sister made the good news even more special.
When he frowned, obviously puzzled, she smiled. “I forgot. You wouldn’t have heard the news yet. Lyssa and Nick are engaged.”
Michael snorted a laugh.
“What’s so funny?”
“Just reacting to the idea of Nick getting married.”
“Because you never thought he’d find the right girl?”
“No. Because I thought he was smart enough to know marriage isn’t a winning proposition.”
Her heart thumped. She set her mug on the tray and sat back again, tucking her suddenly cold hands beneath the edge of the afghan.
Yes, she wanted to be independent and in control as a single mom…but she didn’t want to be a single mom forever. She’d realized that truth the day she had met Michael. And even after last night’s conversation and this morning’s warnings to herself, she hadn’t given up on him.
Until this minute.
Until his one flat statement shattered all her hopes and dreams.
Where were Callie and Lyssa to save their little sister now? She could see them shaking their heads in disbelief at hearing this news. She could hear them, too.
Isn’t that just like poor Amber to mess things up?
Even as a four-year-old, she was always the mommy when she played house.
And now she’s crushing on a man who probably runs at the first mention of marriage.
And they would be right. Michael’s conviction was a chilling reminder she couldn’t trust her instincts about men.
Still, couldn’t she expect just one tiny Christmas miracle?