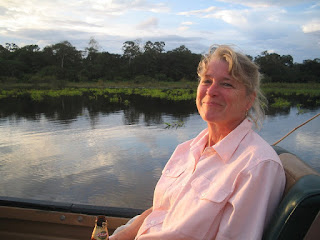 Although M. S. Spencer has lived or traveled in five of the seven continents, the last thirty years were spent mostly in Washington, D.C. as a librarian, speechwriter, literary editor, professional staff at a U. S. Senate committee and at the Dept. of the Interior, non-profit director, and parent. She holds a BA from Vassar College, a diploma in Arabic Studies from the American University in Cairo, and Masters in Anthropology and in Library Science from the University of Chicago.  All of this tends to insinuate itself into her works.
Ms. Spencer has published thirteen romantic suspense or murder mystery novels, with two more on the way. She has two fabulous grown children and an incredible granddaughter. She divides her time between the Gulf Coast of Florida and a tiny village in Maine.

Beverley: Which genre or genres do you write or prefer to write? And why?
M.S.: I write cozy murder mystery, romantic suspense, and some action/adventure/romance. By “cozy” I do not mean my heroine runs a bakery or keeps a cat or lives in the English countryside. It refers to an amateur sleuth who must deal with a puzzle, for example, a corpse in a locked room. I love creating a complicated path to the solution with lots of red herrings and twists and turns.
Beverley: Who influenced you the most in deciding to become a writer?
M.S.: I always wanted to be a writer. I think if you’re as voracious a reader as I was, you eventually find yourself needing to make that leap into creating your own story, putting your own words on the paper.
Beverley: What gets your creative juices flowing?
M.S.: Often when I’m surfing the internet I’ll come across an intriguing or crazy item & it triggers a story line. I learned of the “Ghost Hotel” that way. The Pit & the Passion: Murder at the Ghost Hotel, takes place on Longboat Key, Florida, where in fact there stood the hulk of an unfinished Ritz-Carlton for decades. Begun by John Ringling of circus fame, it languished from 1926 to 1964. So…what would you find at a ghost hotel? Anyone?
Beverley: Do you have a favorite cartoon character? Why?
M.S.: Calvin of Calvin and Hobbes. He’s both adorable and horrible, and his imagination soars higher and wider than anyone in the world. I love Pogo too, of course.
Beverley: Who would you love most to meet 'in person' and why?
M.S.: I have been a widow for 10 years now, and although I’ve tried various methods of finding a new fella, I have been unsuccessful. So, rather than choose some celebrity or writer or professor, the man I’d most like to meet is the one of my dreams.
Beverley: If you had an unexpected free day what would you do with it?
M.S.: Well, I used to go exploring—find a nature trail or historic site. Florida is chock full of fascinating places. I’d like to go to Weeki Wachee Springs and see the mermaids, or to Tarpon Springs to see the sponge divers. Then eat a lovely, looong Greek lunch. But I’d probably seize the day by sitting at my laptop and writing.
Beverley: What are you working on now?
M.S.: I’m working on a story now set in Maine—in the same town as The Penhallow Train Incident. I am not much into series, but I love the denizens of Penhallow and Amity Landing so much I had to let them live on in a new story.
The working title is Mrs. Spinney’s Secret. The story opens with Cassidy Jane Beauvoir, proprietor of Mindful Books and chairman of the Board of Overseers of Amity Landing, confronted with a Hollywood cabal that wants to make a movie in her tiny village. Her objections are overridden by the townspeople, and her initial misgivings must vie with a growing attraction to the film’s director Jasper MacEwan. Unfortunately, both the movie and their romance are hindered by a series of incidents—some fatal, some simply painful. The two must set aside both their differences and their romance to search for answers not only to the mystery, but to the whereabouts of a long lost hoard of English gold.

Monsters and mystery lurk deep in the Amazon—a tale of passion and obsession.
Orion—along with Ursa Major and Ursa Minor—is one of the most recognizable constellations in the sky. Most people zero in on the three stars that make up his belt, but the brightest star in the constellation is Rigel—his left knee or foot.
Orion was the son of Poseidon, who gave him the power to walk on water. He was a great hunter. In the excerpt below, Petra tells Emory why she wishes on Orion’s foot, and he in turn warns her to be careful of him.
Oddly enough, I came up with the title for Orion’s Foot: Myth, Mystery, & Romance in the Amazon, separately from the actual inspiration for the book. I was sitting outside on a beautiful night and saw Orion—I’m sorry to say one of the few constellations I can identify. I thought, what a neat title for a book. There you have it.

Blurb for Orion’s Foot
Petra Steele is wallowing in self-pity after being dumped at the altar, when her brother Nick invites her to come to the Peruvian Amazon. Before she even sets her suitcase down, she's confronted with a murder victim. In a research station peopled with a quirky assortment of scientists, she is drawn to Emory Andrews, a gruff, big man with a secret past. That is, until his beautiful ex-wife shows up. More murders, more secrets, more mysteries ensue, all in the deeply romantic, sizzling jungle. 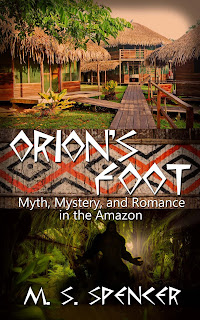 Excerpt from Orion’s Foot
After supper, she sought the hammock room,  hoping to see the capybaras again, but the lawn was  empty. For once, the sky was clear, and she wandered  out and down to the dock to enjoy the stars. Ah, there’s  Orion. Usually people chose Venus or Polaris, but Petra  always wished on Orion’s left foot. Nick had once asked her why. “Because it’s his foot that takes the first  stride across space.”
“So what does that have to do with your wishes?”
“Whenever I’m faced with a scary decision, Orion  gives me the courage to take the first step.”
Nick had laughed at her.
As she closed her eyes and pondered her request, a  rustle sounded behind her. “Don’t fall in.”
Petra sprang forward and nearly did fall in, but a strong hand caught her around her waist and pulled her back. She felt warm breath in her ear. “Emory!”
He let go. “What are you doing anyway? You had one leg hovering over the water.”
“I guess the stars distracted me.” She glanced at him shyly. “I was wishing on Orion. Or rather, on his foot.” She pointed at the star twinkling below the famous belt.
“Why Orion?”
No need to let on how weird I am just yet. “It’s…uh…the only constellation I recognize?”
“It’s probably the only constellation most people recognize.” He looked down at her. “Okay, do you have a foot fetish, or what? Why wish on the foot?”
Just because Nick made fun of me doesn’t mean Emory will. “It brings me luck.”
“Like a rabbit’s foot, only better?”
She didn’t answer. The thing that had been simmering in the back of her mind for the last two days, obscured by the chaos of events, had made itself known. She knew what she wanted to wish for.
“Petra? Did you hear my question?”
Petra lowered her eyes to Emory. “I don’t know about better—but it serves the same function. See, everyone zeroes in on Orion’s belt, or his dog, or his manly physique, but his left foot—Rigel—is actually the brightest star in the constellation.”
He inspected the night sky. “True. And?”
“Well, it reminds me that when you have to take that first step into the unknown you…um…put your best foot forward. I look at Orion striding across the cosmos, and he helps me believe I can meet any challenge.”
Emory was silent for a minute. Petra was about to take her leave when he said, “Did you know that Orion claimed he was the greatest hunter of all time? Gaia sent a scorpion to kill him.”
“Huh. Who is Gaia?”
“Gaia means Earth—she’s the goddess the Greeks called the mother of all life—the primordial deity. The cool New Age kids all worship her. Don’t tell me you aren’t into crystals and yoga?”
“No. So why did Gaia want to kill Orion?”
“Because, to prove his prowess, he announced he was going to hunt down and kill all the animals in the world. Since Gaia is the guardian of every living thing, you might say his threat kinda ruffled her feathers.”
“I’ll bet. So she decided to kill him before he massacred her subjects. Did she succeed?”
“No. Another god—I forget his name—gave Orion the antidote. That’s why you never see both Orion and Scorpio in the sky at the same time.”
“Hmm.”
“So,” he said softly, “Orion is hardly the hero you want to set your heart on. All the stories of him involve power, lust, and murder.” 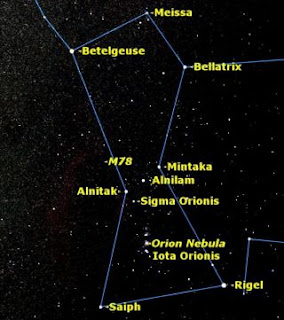 Posted by darkwriter at 9:27 AM