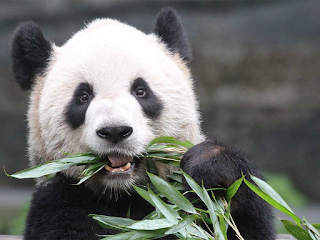 On the weekend I took a trip to the Calgary zoo to see the four Pandas. They’re there on an exchange program with China. The two adults will be there for five years. The two sibling cubs will stay in Calgary for two years, before moving to China in 2019.


The first time I saw Pandas was about thirty years ago, when the Pandas were also at the Calgary zoo, I fell in love with them and I’ve been collecting pandas ever since.
I’ve seen pandas in San Diego, Atlanta and Washington when they were there and I was in the cities. 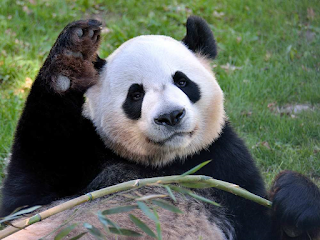 They are in the Panda Passage which is very panda friendly. Adult pandas eat upwards of 38 kilograms of bamboo per day. The zoo has readied itself. Nine varieties of bamboo will be on the menu to fit each bear’s tastes, as two flights a week from China will deliver their meals.
Er Shun is an adult female whose name means “Double Smoothness.” She was born in 2007. She is finer boned and has a smaller head than her adult male counterpart, and weighs roughly 97 kilograms. She gave birth to Jia Panpan (male) and Jia Yueyue (female) in 2015 in Toronto and is known for being a nurturing mother who often still participates in playtime with her two offspring, letting them wrestle her and steal her food. 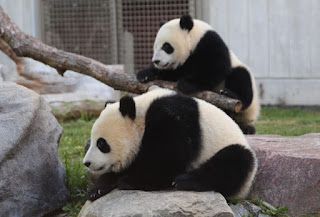 Male giant panda Da Mao Da Mao is known for his playful nature. Compared with Er Shun, he is a picky eater who is quite selective of the bamboo he snacks on. Jia Panpan, the male cub, weighs 55 kilograms. Jia Yueyue, the female cub 50.5 kilograms, is considered the smart and curious one and enjoys various games and challenges.
It was a wonderful day.
Posted by darkwriter at 9:06 PM