With Every Heartbeat An Opportunity Falls Novel
By Nancy Lee Badger

With Every Heartbeat is a contemporary romance. I used memories of growing up on Long Island and visiting New York City to set a story filled with new York sights, sounds, a kidnapping, and romance. A love of science fiction television shows and movies helped give me ideas, also. This is a stand-alone story, but part of my new Opportunity Falls novels.


Tag Line
A starry romantic grows up fast when the man of her dreams comes to town. Lust, and secret glances, start to heat amid an enraged father and a kidnapped child
Book Blurb
Rebecca Delacourt plans to try out for the US Olympic tennis team and loves being a tennis pro at a Long Island country club. Her mother gave up everything for love, but Becka refuses to take time for love or marriage. Her older sister’s problems add to their family’s discord which escalates after dumping Becka’s nephew with their parents. On the phone, Laney demands more help, the same time their parents show up courtside with the man Becka has secretly loved since he first appeared on television. Becka is swept into Laney and her nephew’s problematic, and ultimately dangerous, lives, pulling Taylor Adams into danger with her.

Taylor Adams left his home and family in New Hampshire, changed his name, and followed his dream to be an actor in Hollywood. Unfortunately, his science fiction television show went into reruns many years ago. Commercials, and appearances at Sci-Fi conventions, are not enough. He has set his eye on a film career. Visiting an old friend on Long Island, a producer who promises to help him achieve his goal, little does he realize the young woman swinging a racket at their country club has loved him for years. Their subsequent meetings in Baltimore and New York City turn steamy, until her older sister’s dangerous lifestyle interferes. Worse, all Hell will break loose if her father discovers their secret romance. 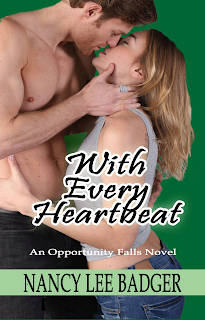 Due to a recent personal scare, and with memories of a beloved aunt, here is an excerpt from With Every Heartbeat

The studio voices faded into silence as an elegant woman with a shock of white hair and a strand of pearls around her wrinkled neck walked on stage. A woman known for her years as a White House correspondent, the graceful woman turned then stood next to a stool. She spoke her lines into the camera. Behind her hung a simple solid pink wall, the color of breast cancer awareness. The shade perfectly complimented her gray silk dress. After she finished, a familiar voice yelled, “Cut!” Becka ran onto the stage and embraced the woman in a big hug.

Taylor glanced around the darkened room, then back toward the stage area. The lights raised and others scurried about doing various jobs.
He spied Stuart Craddock sitting in front, near the cameras, as if he owned the place. When Taylor realized the bastard also sat next to the empty seat Becka had recently vacated, his fists tightened.

With Craddock’s function here a mystery he planned to unravel, he stared at the older man’s short brown hair filled with large sweeps of gray. His suit looked too stiff for such an intimate rendezvous inside a darkened studio. A gaudy gold ring glittered from his right hand while the other snapped at a mousy little woman holding a clipboard.

“Taylor! What are you doing here?” said a familiar and utterly surprised voice. He flicked his attention away from Craddock, but not before he caught the scowl that marred the man’s face.

Becka skipped happily toward him. When her soft hands clasped both of his, his body responded, and he shifted uncomfortably. She smiled up at him while she squeezed his hands.

A sweet heat pumped from her body into his fingertips, and her subtle fragrance made him harden. Her eyes sparkled with pleasure, causing his heart to skip a beat. She didn’t seem mad at him for showing up, and Taylor privately thanked the Lord he hadn’t made the trip for nothing. So far, so good, but he better not jinx this by saying something stupid.

“I couldn’t get you and your project out of my thoughts last night. I decided to come and help.”

He froze at her look of disbelief before continuing. “Yes. Is there anything I can do to support the cause? Can I make a donation? Send me to the corner deli for coffee and donuts while you work? I’ll do anything at all.”

Her intense expression, filled more with skepticism than gratitude, launched a nervous tick along his left cheek. Did she think he lied simply to be close at hand?

“Of course you’re surprised. I’m sure you never dreamed I’d follow you to Baltimore.” He couldn’t understand it, either. Stuart looked less than happy, too. “Hear me out.”

“I’m flattered you wanted to see me so soon, Taylor. I was under the impression you and Dad had more business to take care of. Besides, why would you want to help me?”

“Your dad had other plans, so I had a few days off. Please. I need to do this. Truthfully, it doesn’t only concern you.”


Find all Buy Links here: http://nancyleebadger.blogspot.com/p/books.html
Retail: $3.99 but the ebook is ON SALE for $.99 until Sept. 10th