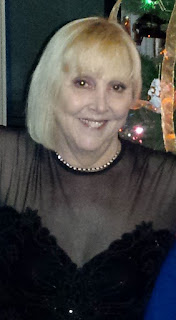 This week we’re going to find out a little about author Linda Nightingale. Linda will be talking about secondary characters. She’ll also tell us a little about herself and her writing, and answer some fun questions.
Linda Nightingale is a native-born South Carolinian who has lived in England and Canada, and now resides in Texas.  Before turning to writing, she bred, trained and showed Andalusian horses for thirteen years.

In 2012, her novel, Gemini Rising, was voted Best Mainstream Novel in the Preditors & Editors Readers Poll. Her vampire romance, Cardinal Desires won the Georgia Romance Writers Magnolia Award in 2013, and that was followed by her science fiction romance, Love for Sale, being awarded Best SF/Fantasy novel of 2015 by the Paranormal Romance Guild’s Reviewer’s Choice, and also voted one of the Top Ten Romance Novels of 2015 by the Preditors & Editors Readers Poll for that year.

Beverley: Are secondary characters important in a story?
Linda: Secondary characters are supporting actors and even have their own Oscar category. Secondary characters can help show traits of the hero and heroine, cement the plot and reveal information unknown to the hero and heroine.  In my current WIP, I give a secondary character his own scenes told from his POV but I’m not sure I’ll get by with that one!
Beverley: How many secondary characters should be in a story? Can you have too many?
Linda: I think you should have a sufficient number to tell your story.  I’ve never heard no hard and fast rule at any rate.  That said, I doubt I’d parade ten or more secondary characters onto the stage.  A couple of well-developed secondary characters can easily help flesh out the story and the other characters.
Beverley: Do secondary characters need to have or be involved in conflict? If yes - inner or outer conflicts, or both?
Linda: I think so.  The more they are involved in the story, the more real they become, and convincing a reader that our characters are real is the primary objective, isn’t it?
Beverley: How detailed do you need to know your secondary characters?
Linda: In a more concise way, I try to make them as round and real as the main characters within the limits of space and time (not nebulous universal terms)
Beverley: How do you use secondary characters in your books?
Linda: To support the main characters, to add a subplot, to add interest in a lagging middle.
Beverley: Do you have any favorite secondary characters – yours or other?
Linda: My favorite of my secondary characters in Four by Moonlight is the anti-heroine in “Night Before Doomsday.”  Ruth is lush, sensual and alluring. She knows what she wants and uses all her charms to get it.  She doesn’t come across as a nice person, more as conniving, but if you think about her actions, it’s clear that she’s in love with the hero even if she also wants to possess him like a trophy.
~*~ Disclaimer: I don’t feel like I’m qualified to pontificate on the craft of writing.  I’m purely a pantster and completely write without any outline or mainboard.
Beverley: Any last comments on secondary characters?
Linda: To me, the best part of a story is how the characters interact. So giving the main character someone to interact with, even if it’s a minor exchange, can add depth to the story.
Beverley: How long have you been writing?
Linda: I wrote as a young girl but put my pen away as a teenager when a newspaper editor was rather brutally critical of my angsty poetry.  I didn’t pick up my pen again until 1992 (I’m older than dirt) when I wrote my first novel—a vampire story called Sinners’ Opera. Shortly, I won the Georgia Romance Writers  Magnolia Award for Excellence (Maggie) with another vampire book called Cardinal Desires. I was now a writer, but it took me until 2012 to become a published writer.
Beverley: Which genre or genres do you write or prefer to write?
Linda: I like to play fast and loose with the boundaries of genre.  I have published a sci-fi romance, a contemporary romantic suspense, paranormal romance.  In October, Class Act will re-release my first published novel, a controversial dark fantasy, titled Anointing: Gemini Factor.
Beverley: Who influenced you the most in deciding to become a writer?
Linda: Anne Rice.  I thought if she could do it, I could do it.  And I must give credit to all the wonderful writers I’ve met along the way.
Beverley: What obstacles did you have to overcome to begin creating your work?
Linda: When I began writing, I had two young children, an Andalusian horse breeding farm and brokerage, and a full-time job as an Executive Assistant for a Circuit Judge in South Carolina.
Beverley: What gets your creative juices flowing?
Linda: Music
Beverley: What will stop your creative muse the quickest?
Linda: Duty and deadline.
Beverley: What do you have for breakfast?
Linda: I don’t eat breakfast and only sometimes lunch.  I snack during the day and have a nice meal with wine in the evening.
Beverley: What do you wear when you are writing?
Linda: Whatever I dress in for the day quite frequently leggings and some manner of top: t-shirt, tunic or such.
Beverley: Where do you do most of your writing?
Linda: In my office, overlooking my backyard.  I do almost all of my writing on my laptop.
Beverley: Do you have a favorite cartoon character? Why?
Linda: Sorry, no.  Unless you’d count Alucard from Castlevania!
Beverley: Who would you love most to meet 'in person' and why?
Linda: I’d love to meet the Duke of Windsor (Edward VIII of England) who abdicated the throne to marry the American divorcee Wallis Simpson.  I’ve always been very attracted to his life and times and would like to meet the man who gave up a crown for love.
Beverley: If you had an unexpected free day what would you do with it?
Linda: Search for something to do or jump into my car and drive to the Hill Country, perhaps, the twisty 3 Twisted Sisters, for a fun day behind the wheel.  I have always been a car nut and age hasn’t cured that addiction.  Wings says hello.
Beverley: What are you working on now?
Linda: I’ve just submitted a controversial dark fantasy to CAB (Class Act Books).  I expect it to be released in mid-October, so I’m on hold for first round of edits.  Gemini Factor isn’t for everyone, but it is a love story played out in a fantasy setting. 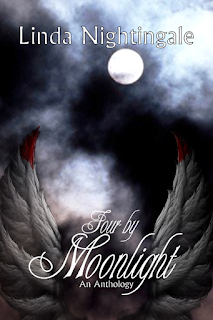 Blurb for Four by Midnight:
An anthology of love in the moonlight…in the paranormal universe.


Gypsy Ribbons – A moonlight ride on the moors and meeting a notorious highwayman will forever change Lady Virginia Darby’s life.


Star Angel – Lucy was stuck in a rut and in an Idaho potato patch. She’d seen him in the corner of her eye—a fleeting glimpse of beauty—now he stood before her in the flesh.


The Night Before Doomsday – All his brothers had succumbed to lust, but Azazel resisted temptation until the wrong woman came along.


The Gate Keeper’s Cottage – Newlywed Meggie Richelieu’s mysterious, phantom lover may be more than anyone, except the plantation housekeeper, suspects.


Don’t forget to check back next week for another author interview.
Posted by darkwriter at 10:38 PM