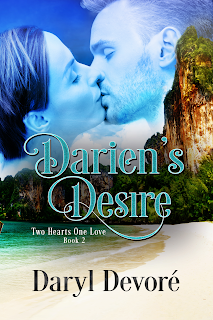 This week we’re going to find out a little about author Daryl Devore. July’s theme is ‘Settings’ so Daryl will be talking about settings. She’ll also tell us a little about herself and her writing, and answer some fun questions.
Daryl Devore (@daryldevore) lives in an old farmhouse in Ontario, Canada, with her husband, a large salt water aquarium full of fish, a black cat named Licorice and some house ghosts. Her daughter is grown and has flown the nest. Daryl loves to take long walks on her quiet country road or snowshoe across the back acres, and in the summer, kayak along the St. Lawrence River. She has touched a moon rock, a mammoth, and a meteorite. She’s been deep in the ocean in a submarine, flown high over Niagara Falls in a helicopter and used the ladies room in a royal palace. Life’s an adventure and Daryl’s having fun living it.


Blurb - Book 1 – What Happens in Bangkok
To save Darien's life his brother asks, "Can you walk in high heels?"
Erika Bailey, owner/manager of a drag queen club in Bangkok, Thailand has happily settled into all aspects of her new life, except for her lack of a love life. When a new diva auditions, Erika is bewildered over her instant attraction to the blond God, Apollo.
Darien Scott is on vacation after a world tour and mistakenly figures the safest place to be is at The Black Dragon with the head of a Triad. When the club is hit, Darien is the only person to get out alive. Now   he's running from the police and a Triad. Mistake number 1.
Disguised as a drag queen, he's hired by Erika, but falls hard for his new boss, then struggles with not coming clean with her. Mistake number 2.
Can he fix his mistakes and find a life filled with love or is he headed straight for mistake number 3?


Blurb - Book 2 – Darien's Desire You loved What Happens in Bangkok and want to know what happens next….
It's complicated is not only her relationship status, but the definition of Erika Bailey's life. She loves managing her drag queen club in Bangkok, Thailand, but her rock star boyfriend resides in North Carolina. And to top it off, her father threatens she must stay away from Darien or lose the Pink Flamingo. Does she protect her club or her love?
Darien Scott, Grammy award winning international superstar, wants nothing more than to wake up in the arms of Erika, the woman he loves, but contractual obligations force him to exotic video shoots and an isolated movie set with one of Hollywood's sexiest stars.
With the feeding frenzy of social media trending every aspect of Darien's life—real or not—it's hard for Erika to know the truth. Will she be able to see through the lies and trust Darien? Or will evidence from damaging Internet rumors condemn their relationship?


Blurb - Book 3 – Title not released yet.
Concerned for his fiancée, Erika Bailey’s safety, rock star Darien Scott races to Bangkok to protect her, only to discover his brother is missing. Fearing the worse, he contacts his nemesis, Gan, and makes a repulsive deal that will free his brother and protect Erika’s club, The Pink Flamingo. Or so he thought. When a python and Gan are involved, things go sour, and Darien sinks into a deep depression.
Erika is disheartened by the betrayal of her parents. Her father's destruction of her club, and the humiliation of her mother’s drunken behavior have her feeling down, but those are the least of her worries. She has a wedding to plan, but won’t. Having been betrayed too often, she’s scared to trust Darien.
How can Erika prove to herself and Darien that she loves and trusts him? Simple. All she has to do is jump out of a plane. 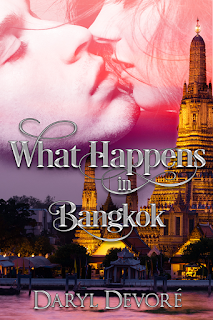 Excerpt from What Happens in Bangkok


He pointed at the food vendors. "Do you want to get a snack before we hit the club?"
Erika glanced at the various booths. "Which one? The smells from each are just mouth-watering."
"Easy choice. That one." Darien pointed. "The lady's wearing purple. You love purple, so we get food from there."
An elderly lady, wearing a purple silk Thai dress, smiled a toothless grin. With broken Thai, he ordered. Turning to Erika, he pointed at the row of soda cans. "Drink?"
"Diet Coke, please."
The lady scooped sticky rice into two takeout containers, then sliced pieces of roast meat, from the chicken hanging by the side of the booth. The pieces dropped onto the containers of rice. She pointed at the sauces. Darien nodded and she plopped a few Thai chilies and ginger on the top of the chicken. Erika pulled out her wallet.
Darien placed his hand on her arm. "No, I get to pay for something. This I can afford. Seats three rows from the front at the National Theatre, not so much. Chicken and rice from a food vendor, I got this." He handed over a few bahts, refused the change, and accepted the containers, chopsticks and drinks. "Korb kun ka."
The elderly lady smiled and bowed.
Darien held out one of the containers. "Want to find a spot to sit or wander around the plaza?"
"Let's play tourist. Check out the souvenirs. See the sights."
"Wow, you really have been locked in the club for too long. See this." He waved his chopsticks in the air. "This is the outside world. It's very large. Some of it's ugly, but a lot is nice. Like this chicken." He shoveled some into his mouth.
Savoring the food, neither spoke as they walked among the booths. One would stop, point at something and laugh, then move on. They paused by a busker on a unicycle juggling flaming batons.
Erika leaned close. He caught the scent of her perfume above the smells of the food and crowd.


You can find Daryl at:


Don’t forget to check back next week for another author interview and more discussion of settings.
Posted by darkwriter at 10:25 PM