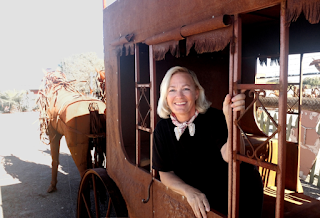 This week we’re talking to going to author Deb Sanders. May’s theme is ‘Heroines’ so Deb will be talking about heroines.
Beverley: What do you think makes a heroine, either in real life or in books?
Deb: Heroines contain an inner strength that allows them to overcome extreme odds and face insurmountable obstacles, often as simple as trying to raise a family while working two jobs. There's usually a character arc even in real life where the heroine comes out on the other side wiser, stronger and more compassionate.
Beverley: Is it important to have strong conflicts? If yes, inner or outer conflicts, or both?
Deb: I believe it depends on the genre. Character based stories usually deal with inner conflict but I prefer both. I like action so I use outer conflict as a catalyst for internal growth.
Beverley: Who are your favorite heroines, and why?
Deb: I really enjoyed Jane Eyre because she was a meek woman who found inner strength in an era where it was not as acceptable. Today, I would choose Katniss Everdeen in the Hunger Games trilogy. She's an unwilling heroine who tackles her new found power with zest. I especially enjoyed the fact she accepted that life does not always follow our dreams but often gives us something better.
Beverley: Tell me about the heroines in your book/s.
Deb: Daisy O'Connor spent part of her childhood on a Lakota reservation where she and her mother endured abusive treatment from her step-father. Her beloved adopted grandfather taught her Native ways so she has a spiritual base. When she eventually relocates to Atlanta, she embraces the southern lifestyle and pushes those old memories away. However, when Grandfather requests her help in searching for a missing person, she must rely on his teachings as well as good dose of Southern charm to get to the bottom of things.
Beverley: How do you develop the characteristics for your heroine?
Deb: Many of my characters are based on facets of real people. Daisy is no exception. She embodies the soul of a Southern belle, who is typically tougher than they let on. Daisy tells little white lies, then tries to justify them with God. She has a heart of gold, is loyal and will fight for those in her inner circle. She prefers using charm and sweetness to get her way but is not unfamiliar with more forceful tactics. She's verbally expressive but guards her emotions fiercely. These are all traits of people I know and love, many family members.
Beverley: How long have you been writing?
Deb: I've written all my life, even garnering awards in school. I wrote a romance when I was twenty and sent it to Harlequin. They returned it with suggested revisions and requested I resubmit. Unfortunately, I was married to an emotionally abusive man who goaded me with insults until I threw the manuscript into the fireplace. I didn't write fiction again for years, choosing to concentrate on web content, newsletters and newspaper articles, instead. After my children were grown, the itch returned along with a wonderfully supportive husband. So I began seriously following my writing passion again in 2010.
Beverley: What genre do you write in and why?
Deb: I typically write sub-genres of suspense or mystery. Some include romance, some paranormal.
Beverley: Who influenced you the most in deciding to become a writer?
Deb: My mother who believed I could accomplish anything. And my daughter who is doing a marvelous job raising two boys, one with special needs. She amazes me.
Beverley: What obstacles did you have to overcome to begin creating your work?
Deb: I think I needed to find my own inner strength and balance. Then it was a matter of finding time as a single mom. But challenging life experiences has given me a depth of understanding that is invaluable.
Beverley: What gets your creative juices flowing?
Deb: A brisk hike.
Beverley: What will stop your creative muse the quickest?
Deb: Internal stress.
Beverley: What do you have for breakfast?
Deb: I'm not a breakfast person but I usually eat oatmeal or fruit.
Beverley: What do you wear when you are writing?
Deb: I'm a night owl. My pajamas or sweats.
Beverley: Where do you do most of your writing?
Deb: As a full time RVer, we travel constantly. I transformed our unit's bunkhouse into my office.
Beverley: Do you have a favorite cartoon character? Why?
Deb: I've always been partial to Tweety Bird.
Beverley: Who would you love most to meet 'in person' and why?
Deb: I had the extreme pleasure of meeting John Sandford at the Tucson Festival of Books this year. It would be fun to have a one-on-one to pick his brain. I'd also like to meet Joe Konrath who is an inspiration of for Indie authors. And Stephen King just because he's so unique.
Beverley: If you had an unexpected free day what would you do with it?
Deb: I have unexpected free days on the road. I love being outdoors - hiking the Arizona desert, climbing a mountain pass or more recently, wandering among the Hoodoos in Bryce Canyon.
Beverley: What are you working on now?
Deb: Current projects are the second book for my Dead Men series featuring Daisy O'Connor - Dead Men Can't Dance. It's almost done. I'm also working on a rather grisly episodic series about a serial killer who travels in an RV leaving behind a swath of dead bodies. 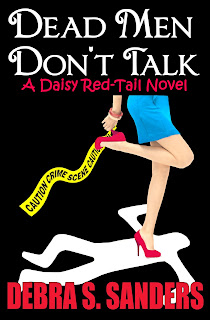 Don’t forget to check back next week for another author interview and more discussion of heroines.
Posted by darkwriter at 9:47 PM