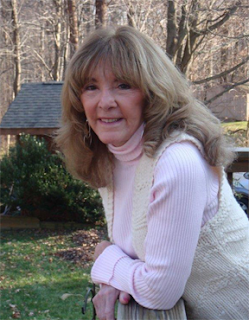 Today we’re going to find out a little about author Charmaine Gordon. March’s theme is ‘Heroes’ so Charmaine will be talking about heroes. She’ll also tell us a little about herself and her writing, and answer some fun questions.
Charmaine says, “I didn’t spread my wings until we, as civilians, moved to New York. An actor friend who had seen me in community theater plays, said I should get off my butt to head for the city. I was wasting my time and so my hubs drew a map of how to drive to New York City-YIKES!- and away I went. Much to my surprise, I began to get work, a lot of work in daytime drama like 13 years on One Life to Live, A few years on Another World and more. Movies called for bit parts. My first was Working Girl where Mike Nichols beckoned. I held the balloons, cake and sang Happy Birthday to Melanie Griffith and during the break shared a hot dog with Harrison Ford. Another month-long movie where Anthony –call me Tony-Hopkins invited me to lunch with the leads and staff. What a sweet time. Also, When Harry Met Sally and we all sang with Carrie Fisher, young and pretty back then. During the run of an Off-Broadway play, I felt my voice change. The next day a famous voice doctor gave me bad news. “You have Spasmodic Dysphonia. Your good voice is gone.”
Creative juices continued to flow and I began to write without knowing what I was doing. Twenty-five stories later, I’m still getting the hang of this wonderful craft.


Beverley: What do you think makes a hero, either in real life or in books?
Charmaine: Courage is important, a willingness to speak for yourself and kindness to others. That’s a big one for me. Put a smile on your face and lend a hand to a stranger at the grocery store, crossing the street, just be pleasant. My first love joined the Air Force and became a pilot. After living a sheltered life in Chicago, when we married and I became an officer’s bride, my eyes opened wide to a wonderful world of giving, caring strong women and men who fought for our country. With the men often away on three to six month missions, women raised their families alone yet never alone because we bonded.

I’ve never lost the fire inside to hold my hand out and smile.
Beverley: Is it important to have strong conflicts? If yes, inner or outer conflicts, or both?
Charmaine: Without conflicts, there is no story. I learned that early on. Life is definitely not a bowl of cherries. Writing fiction, the author must find a way, different paths toward conflict and resolution. In real life, I’ve always been a calm, collected happy woman, never arguing, just pleasant. My Mother had that quality. When I began to write, someone said, “So where’s the conflict?” Duh, what conflict. Really? For someone who isn’t feisty by nature, you must be clever or the story goes flat.
Beverley: Who are your favorite heroes, and why?
Charmaine: The rugged, scarred face of Lucas Davenport, hero in John Sandford’s books is my kind of guy.  I enjoy John Sandford’s books because there’s so much humor blended in with crime. And then, above all, I love James Lee Burke considered to be one of the finest writers of today. If you haven’t read any one of his books, you’re missing a great read.
Beverley: Tell me about the heroes in your book/s.
Charmaine: Here goes. The Catch is about this handsome football player so full of himself and when the one girl he really cared about said NO, he got lost sleeping with a bunch of girls in college who meant nothing to him. The story begins on New Years Day when he wakes up to find a woman in his bed, a woman from an escort agency and finally he knows how low he’s fallen. The story takes off from there as he makes amends to his family and so much more. I so enjoyed writing this book. Well, I truly love writing all my books. Thanks for this fine question.
Beverley: How do you develop the characteristics for your hero?
Charmaine: I do believe my acting background has a lot to do with how I see the characters grow. Just like planting seeds in a garden or watching your babies develop. It’s a wonder, this writing world we live in. I see them so clearly, hear their voices, know their names with no problem as if they are living beings. Delicious!  For instance, Tom Donnelly, the hero, is a football player. Picture this, I think, and he shows up, blond hair, wide shoulders, the quarterback with authority. He falls for Charlie Costigan, a girl who believes in chastity. She has no intention of allowing him in. Just a kiss will do. This changes his whole life until he, now a lawyer, crosses paths with Joanne McKenna Friedman, a smart young lawyer, beautiful on the outside, damaged on the inside. Conflict! Don’t we love it! 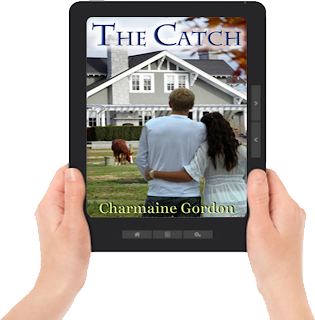 Excerpt from The Catch

The woman in his bed sat up and shoved him hard. “Times up, handsome.”

He attempted his winning grin; it didn’t work. Vicki. No Vicki came to his muddled mind. The fog lifted to recall speaking to an escort service for a date.

Naked, Vicki stalked to the bathroom with an armload of clothes picked up on the way. Five minutes later, money in her tight fist, Vicki came running out of the bathroom to scream in his face. “The deal was a thousand dollars. I count five hundred. Where’s the rest?” Hands on voluptuous hips she glared at him.

Head pounding from the world’s worst hangover, Tom stumbled to his dresser. Money hidden somewhere under. . .Clothes flew as he searched and came up with a roll of cash. He handed her four hundred fifty dollars. “Sorry, I’ll make it up next time.”

“Loser. Word gets around, no one’s gonna go with you. Not from the best service in town.” Vicki slammed the front door.

Tom shook his head. Happy New Year to me. Sunk so low I had to hire a date for the big party. Me, the Catch, every girl’s hope reduced to this.


Don’t forget to check back next week for another author interview. This time it's on Heroes.
Posted by darkwriter at 12:00 AM