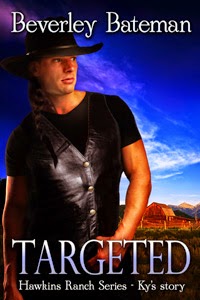 I won a critique by bestselling western romance author Caroline Clemmons in the Brenda Novak Diabetic Auction. She’s going to critique the first 3 chapters of the third book in the Hawkins Family series – Targeted. I’m busy editing it right now and hope to send it off tomorrow. I thought you might be interested in an excerpt from that book.


Janna Kincaid sat straight up in bed, trying to focus her sleep drugged brain. Usually it took a five alarm fire to even get her to even roll over, let alone open her eyes.


Had there been a siren? A backfire?


Her mind tried to register what had disturbed her sub conscious. Glancing at the clock beside her bed the numbers showed two forty eight.


The hairs on the back of her neck tingled and moved to attention.


Someone or something was in the house.


Holding her breath, she waited for another sound, something that would explain why she was awake.


Had it been breaking glass that woke her? Did someone break in through the patio door?


Slithering her legs across the soft, expensive, cotton sheets, to the side of the bed, she continued listening as she quietly slid the drawer of her bedside table open. Her fingers grasped the cold metal of her thirty eight. Her other hand grabbed her cell phone. Slipping out of bed she glided toward the bedroom door.


She heard a soft thump. A muffled curse followed.


Whoever was out there had probably hit the coffee table. The brass corners would cause some damage to his leg. If you followed the trajectory from the patio door to the coffee table he could be heading toward her bedroom.


But if he was a burglar, why come to her bedroom? The TV and the computer were in the den.


Slipping behind the door Janna heard a soft click. As her eyes adjusted to the darkness she could see the knob turning. The door was pushed gently back toward her, allowing a sliver of light to cross her bed.


There was a muffled crack; then another one.


The door closed, this time not as quietly.


For another minute Janna stood motionless, her ear to the wall. Then she punched 911 into her cell.


“There’s someone in my house. I think they have a gun.” Janna


whispered into the receiver.


At the operators request she whispered her name and address.


“The police are on their way. Please stay on the line until they arrive.”


Janna nodded. Still holding the phone she across the door.


“Yes.” Janna whispered as she opened the door, just enough so she could hear if anyone was still in her house. Clutching the cell phone, Janna pressed her body against the door frame.


It was deadly silent.


Whoever had been there was gone. She was sure of that.


With her back against the wall she edged her way into the living room.


In the distance a siren ripped through the silence of the night, tearing a strip out of the dark, empty streets.


He hadn’t broken in to steal anything. He hadn’t been there long enough.


Moving stealthily across the room toward the front door, Janna found it open. A cool April breeze drifted in, carrying the scent of fir and dogwood. Janna shivered before taking a deep breath to calm herself.


Obviously the person wasn’t concerned about someone finding the door open. Whoever had been there had let themselves out the front door and left it open behind them. They hadn’t stolen anything. They had entered her house; come straight to her bedroom, fired a shot, and left.


The siren screamed louder. Janna could see the flashing red lights racing down her street. The lights created a rotating ball effect, like the kind they had a disco dances. Every few seconds her couch and lamps were reflected in an eerie blood red glow.


Brakes squealed. Suddenly it was quiet.


The ballroom effect disappeared. The doors of the police car opened and slammed shut.


“They’re here. Thank you.” Janna clicked her cell phone shut. Turning on the lights she stood in the doorway as two of Seattle’s finest approached her door cautiously, guns drawn.


“You the one who called it in?” One of the uniformed officers did a thorough visual scan of her person.


Probably checking for weapons, Janna thought, suddenly conscious that she was wearing only her yellow, Winnie the Pooh night shirt. She tugged at the hem. Her usually warm house felt chilly and damp.


“Janna Kincaid, I own the house.”


“Sergeant Delaney. What happened?” He lumbered up the steps, towering over Janna’s five foot seven frame.


She squinted up at him, “I’m not sure. Someone broke in, probably through the patio door. I called 911 and waited for you to arrive. I haven’t looked around yet. I haven’t touched anything but the doorknob from the bedroom.”


“Good. Well, let’s see what he was after. This is my partner Sergeant Murdoch.” Delaney nodded to his partner. “You take the outside perimeter.”


Janna nodded at the shorter, younger man with dark hair and eyes.


He acknowledged her before moving off into the darkness.


“I think he entered by breaking the glass in the patio door.” Janna moved to the glass door at the back of the room. Outside she could see the shadow of the other police officer through the shattered glass, as he squatted to get a better look of the ground outside the door, partially hidden by her lilac bushes. The recent rains may have made the ground soft enough to get some footprints. She could hope.


There was splintered glass spread in a two foot semi-circle on the plush, cream colored, wool carpet. Janna jerked to a stop so she didn’t get splinters in her bare feet.


“You might want to put something on your feet, ma’am.” Delaney glanced at her feet, then he pulled out a camera and started snapping pictures.


Janna nodded, pulling a pair of old runners out from under the couch and sliding them over her bare feet. She didn’t bother with the laces.


“Then I think he headed toward my bedroom. I heard a thud. I think he hit the coffee table.” Janna jerked at the hem of her nightshirt as she indicated the large oak table in front of her dark brown, leather couch.


Delaney nodded as he snapped a few more pictures of the solid oak and glass coffee with the replica of the statue of David in the center. “We can get the lab guys to check and see if maybe he left any DNA when he hit it. You keep saying he, do you know who it might have been?”


“I have no idea. I guess I just use ‘he’ because I don’t think of a woman doing this.”


A smile slipped across Delaney’s craggy face. “Oh, they do it all right.”


Janna moved through her open, bedroom door. “Then he opened this door. I think he took a couple of shots at the bed and then left.  At least it sounded like a gun with a silencer.”


Flipping on the light she looked at the queen-sized bed with the mauve, shamrock  green and white floral duvet thrown back to reveal the matching, expensive, mauve cotton sheets and pillow cases.


There were two holes in one of the mauve covered pillows.


The enormity of the situation finally hit her in the stomach. A wall of nausea crashed over her. She stared at the bed, unable to look away.


“Ohmigawd.” Her chest felt like a hundred pound weight was sitting on it. Janna struggled to take a breath.


“You might want to sit down.” Delaney touched her shoulder, motioning her back to the living room.


Nodding, Janna moved robot-like to the couch, still in her night shirt. Someone had tried to kill her.


She flopped down on the butter soft, brown leather. It felt cool against the back of her thighs. Pulling her legs up under her she tucked in the hem of her night shirt.


He had shot at her.


If she hadn’t heard him and hidden behind the door, she would be dead right now.


Why? Why would someone want to kill her?
Posted by darkwriter at 12:25 AM