I’m writing about another Canadian holiday. I’m writing this early because I’m going to be traveling to California. So I’ll be spending our Canadian Remembrance Day or Armistice Day in California.


In Canada, and other Commonwealth countries, on November 11th, we have Remembrance Day. In the US, I believe it’s Veterans’ day. It’s a day to remember all those who have gone to war to fight for our country. It recalls the end of hostilities of World War I on that date in 1918. Hostilities formally ended "at the 11th hour of the 11th day of the 11th month."


In Canada we wear poppies to remember the day. The poppies go on sale several weeks ahead of the actual day. The veteran’s from one of the wars usually have them for sale for a donation. And almost every Canadian wears a poppy. I have mine and will be wearing on my flight to California and until Tuesday.


November 11th is a holiday and we have ceremonies to lay wreaths at veteran’s memorials. At eleven am there is a two minute silence across the country to remember those who fell to save our country.


In school we had to memorize the poem “In Flanders Fields” by Lieutenant Colonel John McCrae.
I still remember the poem. I find it’s one of those poems hat actually speaks to me.  I love the poem and  remember it every Remembrance Day. For those of you who may not know it, here is the poem.

In Flanders fields the poppies blow
Between the crosses row on row,
That mark our place; and in the sky
The larks, still bravely singing, fly
Scarce heard amid the guns below.

We are the Dead. short days ago
We lived, felt dawn, saw sunset glow
Loved and were loved, and now we lie
In Flanders fields.

Take up our quarrel with our foe:
To you from failing hands we throw
The torch; be yours to hold it high
If ye break faith with us who die
We shall not sleep, though poppies grow
In Flanders fields. 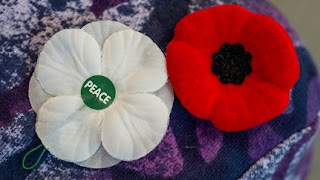