Seelie Kay and her New Release 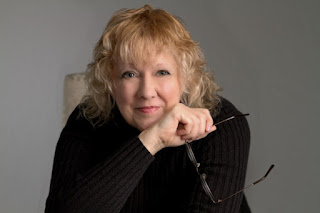 Award-winning author Seelie Kay writes about lawyers in love, sometimes with a dash of kink. Writing under a nom de plume, the former lawyer and journalist draws her stories from more than 30 years in the legal world. Seelie’s wicked pen has resulted in nineteen works of fiction, including the new paranormal romance series Donovan Trait, as well the erotic romance Kinky Briefs series and The Feisty Lawyers romantic suspense series. She also authored The Last Christmas, The Garage Dweller, A Touchdown to Remember, The President’s Wife, The President’s Daughter, Seizing Hope, The White House Wedding, and participated in the romance anthology Pieces of Us.

When not spinning romantic tales, Seelie ghostwrites nonfiction for lawyers and other professionals. Currently, she resides in a bucolic exurb outside Milwaukee, WI, where she enjoys opera, the Green Bay Packers, gourmet cooking, organic gardening, and an occasional bottle of red wine.

Seelie is an MS warrior and ruthlessly battles the disease on a daily basis. Her message to those diagnosed with MS: Never give up. You define MS, it does not define you!

Beverley: Why do you write romance?

Seelie: Because I am fascinated by the games people play to find and secure a lasting relationship, which is not always love. There’s the chase, the courtship, the falling, the surrender. That’s what I try to capture in my stories.

Beverley: Do you prefer a certain type of romantic hero?

Beverley: Why did you write “Ye Gods! The Law is an Ass?”

Seelie: Donovan Trait is a vampire lawyer. In the human world, a very respected lawyer. I wanted to give him the opportunity to shine in the vampire world. So I created a scenario where his turned vampire bride Shirley is unfairly punished for an unintentionally violating their marital agreement, as well as other outdated, outrageous, and outright discriminatory laws—she unintentionally  To survive and protect their unborn child, they must not only fight back, but also rebel. In this instance, human history provides them with the path. That gave me the opportunity to draw parallels between the fight for human rights and the rights of vampires who aren’t purebloods. It also allowed me to poke at the continued need of both societies to embrace social change. Perhaps surprisingly, the vampires lag far behind the humans in terms of equality and individual freedoms. However, in the end, the message is clear: Whether human or vampire, an individual is entitled to certain rights and liberties. And no human or vampire has a right to deny them. 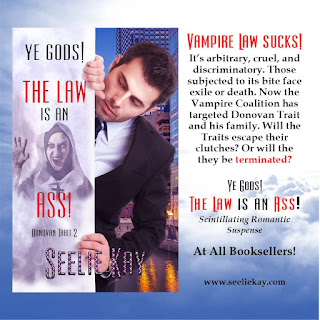 Blurb for Ye Gods! The Law is an Ass:

It was the Great Lie, and it could destroy the Vampire Nation.

In First, We Kill All the Lawyers, vampire lawyer Donovan Trait survived repeated attacks by a serial killer. Now, after violating a marital agreement with the Vampire Coalition, and several ancient Vampire Laws, Donovan, and his newly-turned vampire bride are on the run. You see, in exchange for permitting a pure-blood vampire to marry a turned human, the Traits agreed to allow vampire scientists to monitor the conception and birth of their children. When Judge Shirley Magnusen Trait turns up accidentally pregnant on her wedding day, the fury of the Coalition is unleashed. The tribunal recommends unacceptable punitive action and the Traits are forced to flee to a mysterious island of vampire nuns. The Traits are, by profession, seekers of the truth. But this time, the truth may not set them free. In fact, it could start a revolution. Will the Traits escape the clutches of the Coalition and keep their babies safe? Or will their family be…eliminated?

Excerpt from Ye Gods! The Law is an Ass:

Jonathan opened the envelope and reviewed the report. When he got to the last page, his eyes grew wide. “Donovan, it seems Shirley had a reason for that lightheadedness.”

Donovan gasped. “What is it?”

His father handed him the document and pointed at the bottom of the page. “She’s pregnant.”

Donovan grabbed at the wall. Overwhelmed with unfamiliar emotion, he settled onto a chair and rested his head in his hands. “Ye Gods,” he muttered. “I’m going to be a father.”

“And I am to be a grandfather, finally. However, I am afraid the Coalition may have a problem with this. They may not permit your marriage today or anytime soon.”

Donovan Trait turned to his father, his eyes filled with fury. “Why does it matter? We’re already married in the human world and we are about to repeat our vows before all in the Vampire Kingdom. This doesn’t change anything. It’s not like we are going to have a child out of wedlock. We have broken no laws.”

Jonathan Trait arched a fluffy white brow. “We need to discuss this, son.” He sat beside him. “The problem is, you explicitly agreed to allow the Coalition to oversee the conception and birth of any children born of this joining. Every step of the process was to be observed, studied, and documented. You know this.”

“So, they are going to force us to terminate the pregnancy and start over?” Donovan groaned. “It’s too late. I will not force her to start over. They can be voyeurs the next time. I am sure Shirley will have no problem with the monitoring of her pregnancy. It’s not like she can consult with a human physician. They would not understand that her child may have fangs in utero. And the blood work…” He shuddered. “I can’t imagine what…”

Jonathan frowned. “The agreement says from the point of conception, son.  You know what sticklers they are. Our women became barren more than a century ago. We need to understand why. From a scientific perspective, we need to know exactly what was different, so we can find a solution.”

Jonathan chuckled. “Some of those old fuddie-duddies would stroke out if forced to watch a virile man like you seduce his wife.” His expression turned somber. “Let’s look at the facts as we know them. As a lawyer, that’s a process with which you are familiar.

“Human women can’t carry a vampire child to term. We know that. They miscarry. The human uterus is simply not strong enough to withstand the damage caused by a developing vampire fetus. Those fangs shred the amniotic sac. However, we also don’t know if a female vampire can carry a human baby to term. Shirley may not be able to provide the fetus with the nutrition that it needs to develop properly.

“That raises several questions, Donovan. Is Shirley’s life in danger? And is your child’s life in danger? Not just physically and genetically, but socially. The baby is an anomaly. To some, an adnomination. A freak. He or she will constantly be in danger. If you had kept to the agreement, she and the baby would have been protected. Now everything is at risk.” 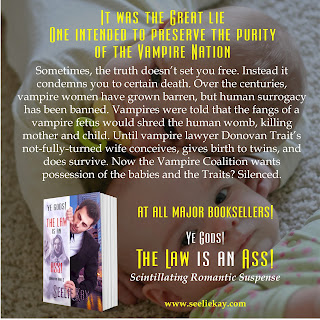 Buy links for Ye Gods! The Law is an Ass: