Herbert Grosshans and His Latest Release 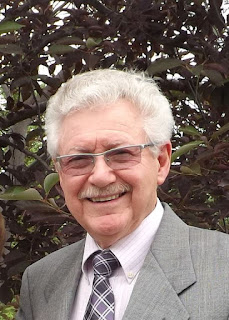 My name is Herbert Grosshans. I'm a writer. Most of my stories are Science Fiction, but I also write Erotica, Thrillers and Mysteries.

Beverley: What’s your name?
Jeremy: My name is Jeremy John Sheppard. I’m a Captain with the Solar Union Special Forces.
Beverley: Where did you grow up?
Jeremy: I was born and raised on Ceres, an asteroid in the asteroid belt of the Solar System. I’m a Belter.
Beverley: During what time period does your story take place?
Jeremy: About a thousand years in your future, give or take a few centuries.
Beverley: What’s your story/back story? Why would someone come up with a story about you?
Jeremy: I joined the Solar Union Space Navy when I was 18 years old, against my father’s wishes. He was an asteroid miner and he would have liked to see me follow in his footsteps, like my younger brother, Alfred. I wanted to get away from all of that. I dedicated my life to the military. At age 26 I became a member of the Solar Union Special Forces. I always believed in law and order, and in a way that was my undoing. I rose quickly in the ranks, and when I became a major, I joined a Special Crimes Unit. We investigated corruption in the upper ranks of the military and we found plenty. When I accused one of the generals of having ties to the drug cartels, I was framed on trumped-up charges, stripped of my rank and sent to a prison planet.
I won’t go into details how I managed to be exonerated of the alleged crimes. You can read all about that in my story. Let’s put it this way, I had a benefactor who believed in me. I didn’t get back my rank, but I did manage to rise to Captain. I worked mostly undercover with a Black Ops unit. It seems history repeated itself. I must have stepped on somebody’s toes and was sent on a suicide mission. We ran into an ambush, all the members of my team were killed, only I survived. I was accused of collaborating with a criminal organization. Nothing could be proven, but I was sent to the outpost on this godforsaken planet I’m on right now. They call it Savanna, a backwards planet, populated by hostile natives. All of the other men on the outpost are nothing but a bunch of losers. This place is supposed to be the end of the road for any of us. The commander of this post, Colonel Wainwright, is a drunk and doesn’t care about discipline or anything else.
At first, after arriving here, I was resigned to the fact that my career was over, but I soon discovered a sinister plot that could change life on Savanna and threaten the peace between humans and the other spacefaring races in this part or the galaxy.
Beverley: What’s your goal in this story?
Jeremy: My goal is to survive on a hostile planet and thwart the plot planned by one of our own.
Beverley: What conflicts are you facing?
Jeremy: I am facing conflict with one of my superiors and the criminal organization behind him. I also must save a group of civilians incarcerated on the outpost under false pretenses.
Beverley: Do you have a plan for resolving them?
Jeremy: Yes, I do. Of course, I can’t do it alone. I must rely on the help of a civilian, a colonist by the name of Dennis Collins. He inadvertently stumbled upon the reason for this conspiracy.
Beverley: Is there anything else you’d like us to know about you?
Jeremy: Perhaps I should mention that I was a trooper under the command of Master Scout Terrex Stonewall on the planet Epsilon. That was more than fifteen years ago. Scout Stonewall was not a military man, but he was the equal of any military commander I ever served under. Commodore Chelzic put him into a position of command a lesser man would have struggled with. Scout Stonewall was a man of honor and dignity and he was the reason I joined the Solar Union Special Forces.

You can read about my story in a book written by Herbert Grosshans called ‘Savanna’. 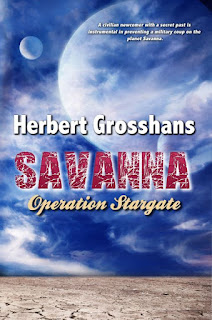 Blurb for Savanna:
Assuming the existence of a Star portal on the planet Savanna to be a secret, the humans don’t know that the Accilla, the Spiders, and other spacefaring races are fully aware of it.
Jeremy Sheppard, a newly appointed Captain of the Solar Space Force to the military outpost and Dennis Collins, a civilian, must join forces to thwart a conspiracy to control the Star portal.