Check Out Alice Renaud and A Merman's Choice 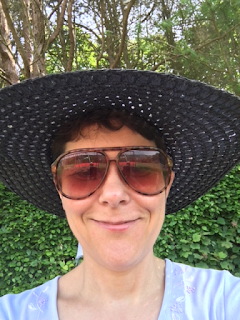 Alice Renaud was born and brought up in Brittany, Western France, her father was French and her mother British (from Wales). She moved to London, UK, in 1997, where she now lives with her husband and son. She works full time as a compliance specialist in a pharmaceutical company. She has been writing in her free time since she was 14. She got quite a few short stories published in UK magazines, before moving to longer fiction. She wrote three contemporary romance books, but didn’t find a publisher for them. She then realized that mermen, sea witches and water demons were a lot more fun than sheikhs and billionaires! Her first two paranormal romances did not find a publisher either, then she wrote “A Merman’s Choice,” which was published in January this year by Black Velvet Seductions. It is the first book in a fantasy romance trilogy inspired by the landscapes and legends of Brittany and Wales. The second book, “Music for a Merman,” will be out later this year. She’s also written a short story, “The Sweetest Magic of All,” that will appear in the BVS supernatural romance anthology “Mystic Desire,” due this fall (autumn). It’s about a sexy apprentice witch and a hot time-travelling warlock who go in search of a magical amulet... and find more than they bargained for!


Alice loves reading and writing stories, and sharing them with anyone who’s interested!
Meet Alex, the heroine of A Merman’s Choice
Beverley: What’s your name? Alex (Alexandra) Williams
Alex: Where did you grow up? When I was little, my family and I lived above my father’s cafe. Later, when my father’s restaurants started to make money, we moved to a nice house down the road. But as my parents were always working such long hours, I spent a lot of time at my grandmother’s, my Nain’s, house, by the sea. My childhood’s best memories were formed there.
Beverley: During what time period does your story take place?
Alex: The story starts when I nearly drown, and Yann rescues me. But I’m unconscious, and I don’t see him – just as well, since he’s in his aquatic shape, and the grey face and webbed hands would have given me a shock! The narrative then jumps forward 8 months, as I go back to the Morvann Islands and meet Yann again. He’s in human shape this time, and I don’t recognise him. Our story unfolds over the next few days, on those beautiful islands off the coast of Wales. I wish you could see them! They are gorgeous in spring.
Beverley: What’s your story/back story? Why would someone come up with a story about you?
Alex: I always wanted to be a photographer, ever since Nain gave me my first camera when I was 5. But my father was having none of it, he wanted me to follow him into his business. Nain and I had a project. She wanted to write a book on the Morvann Islands, and I promised I’d get pictures and stories for her. When she got ill, I knew I had to go back to the Islands to fulfil my promise, even though my near-drowning had left me with a terrible phobia of water. Why write a story about me? Well I’m the first human in centuries to marry a shape-shifting merman, I guess that’s pretty unusual. Of course I’d no idea what Yann was when I met him.
Beverley: What’s your goal in this story?
Alex: I have to overcome my fear of water to return to the Islands, and take those photographs for my Nain. My aim is to be independent, and stand on my own two feet, instead of letting my family wrap me in cotton wool. Falling in love isn’t part of the plan.
Beverley: What conflicts are you facing?
Alex: As well as my anxiety, there is Yann. He’s so hot, and so kind, I’m immediately attracted to him. But I’ve just come out of a bad relationship, so I’m not ready to risk my heart again. Deep down, I fear I’m not good enough for him.
Beverley: Do you have a plan for resolving them?
Alex: My plan is to resist Yann’s charms. I fail miserably. He had me at the fish and chips, to be honest.
Beverley: Is there anything else you’d like us to know about you?
Alex: I discover eventually that I’m a lot stronger than I think. Strong enough to overcome my fears, and reach the island of my dreams at last – the arms of the man I love.


Blurb for A Merman’s Choice Fantasy Romance – Book 1 in the Sea of Love series
For centuries the shape-shifting mermen of the Morvann Islands have lived incognito among humans. But one of them, Yann, has developed some bad habits. Like rescuing humans, even when doing so risks revealing his true nature. When he fishes Alex out of the sea, he doesn’t expect her to reappear eight months later, and turn his life upside down by asking him to be her guide.
Alex is determined to fulfil a promise to her dying grandmother, by gathering pictures and stories of the Morvanns. But she soon discovers that, on these remote Welsh islands, legends have a habit of becoming true!
Over the course of a few days, Yann and Alex grow close. But some mermen hate humans. Their hostility, and Yann’s secret, threaten to tear the couple apart just as they are discovering that they are soul mates. Can Yann overcome the obstacles in his path and make the right choice? 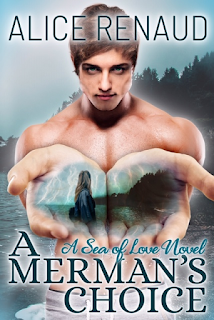 Excerpt for A Merman’s Choice
The girl wasn’t swimming any more. Yann’s sonar gave him a clear picture of her distress. She was flailing. Sinking.
Fear punched him between the ribs. Just a few minutes earlier, she’d been splashing in the shallows, laughing and humming to herself. That music had rippled around him, brightening his journey. Now the sea was snuffing that light out. No! He wouldn’t let it happen. His webbed hands and feet churned the water, and he shot towards her like a torpedo.
Not this one, sea. Not this time.
She came in sight, slim and lovely, with long bronzed limbs and hair the colour of sunshine. But her eyes were closed, her movements slow, hesitant, as if she were falling asleep. His fear hardened into cold, sharp dread. He poured all his energy into the last powerful strokes. He’d almost reached her, when his eye caught the shadow, beyond the crystal surface, out there in the dry world. He sent a sound wave. It came back with an image, and the icy blade inside him twisted: two-legged shapes on the beach. Humans!
If they saw him, they’d know him for what he was. His people’s secret, kept for thousands of years, would be out.
The girl’s head vanished under the waves. To hell with that. He couldn’t let her drown.
He grabbed her and dragged her back to the surface. She thrashed in his arms and coughed up seawater. Intense relief swept through him as he hugged her to his chest. He’d sworn he’d never again swim by and let a human drown, and he’d kept his promise. If the young woman’s eyes remained closed, he might even get away with it. He wanted her to breathe, not scream in horror at the sight of his dark grey face.
He looked up. The shapes on the beach had gone. Another miracle, or perhaps he’d only imagined them. What if they came back? A fresh stab of anxiety propelled him through the surf. He lay the girl down on the sand, cushioning her head on his arm. Her round breasts, encased in the turquoise bikini top, rose and fell in a regular rhythm, but her skin felt clammy under his hands. He scanned the beach in vain for something to cover her with, and saw the motorbike. A sleek, sporty number, well camouflaged among the grass-covered dunes.

Shit. He retracted the webs between his fingers and toes, but his body would take at least twenty minutes to shift from the aquatic shape to the human form. And even when it did, what would the humans think, if they found him naked next to an unconscious girl?
They’d arrest him for indecent exposure, or worse. He touched the girl’s face with a tentative finger. The thought of leaving her sickened him. But he couldn’t stay.
Her eyelids fluttered and she muttered a name. “Boris?”
As if in answer, a male voice tore through the air, from behind the dunes. “Alex!”
Yann flew towards the waves. Help was coming for the girl. She’d be fine.
He sped into the open sea, leaving the human world and human fears behind. He’d saved her. That knowledge glowed inside him as he plunged into the depths. She was safe, and his people would remain safe too. He sang as he rode the riptide, a song full of triumph and laughter. Far away, the humpback whales heard him and picked up the tune. He’d got away with it.
For now. His euphoria abated. No humans had seen him, but his people had sharper eyes and ears. He shouldn’t even have been hanging around, in full merman shape, so close to an inhabited island, but he’d thought he’d be OK. In late September so few tourists were around, and locals had better things to do than go swimming in cold water.  He sniffed the current, tuned his sonar towards the Clans’ Islands. Nothing. With luck, no one would notice that he’d broken the merpeople’s rules. Again.