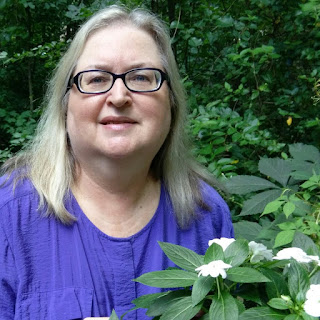 Nancy Lee Badger grew up in Huntington on New York’s Long Island. After attending Plymouth State in New Hampshire, she earned a Bachelor of Science degree in Art Education and met and married her college sweetheart. They raised two handsome sons in New Hampshire and when the children had left the nest, and shoveling show became a chore, she retired from her satisfying job as a 9-1-1 Emergency Medical Dispatcher and moved with her husband to North Carolina, where she writes full-time.
Nancy is a member of Romance Writers of America, Heart of Carolina Romance Writers, Fantasy-Futuristic & Paranormal Romance Writers, and the Triangle Association of Freelancers. She loves to travel and attend Scottish Highland Games and is never far from her laptop. She finds story ideas in the most unusual places.

I am excited to announce my latest book, and the first one to take place in North Carolina, my adopted home. Beverly asked for me an interview of my heroine, Kenzie Mackintosh. Let the interview begin!
Beverley: What’s your name?
Kenzie: Kenzie Mackintosh. Can you tell I am of Scottish descent? Mom was a Lindsay, the daughter of my Scottish grandmother, Maisie. I call her Grams.
Beverley: Where did you grow up?
Kenzie: In the Blue Ridge Mountains of western North Carolina. After my parents died when I was eight, my grandmother’s cabin became my refuge. I love the ocean and visited my cousin’s beach house in Rodanthe, but those memories faded. Until recently.
Beverley: During what time period does your story take place.
Kenzie: Everything happens in present-day North Carolina, but I meet a man who claims to be from 19th century Paris, France, and I can’t get rid of him!
Beverley: What’s your story/back story? Why would someone come up with a story about you?
Kenzie: As I said, I had to grow up fast. I have always art and dabbled in painting as well as quilting. I turned this love into a profession. I am head curator at the Raleigh Museum of Art. I guess the author, also an artist, thought I would be a good ‘fit’.
Beverley: What’s your goal in this story?
Kenzie: Staying alive. Supposedly a demon wants to take over my body in order to rule the world.
Beverley: What conflicts are you facing?
Kenzie: My need to stay clear of a former lover and a demon as well as an untimely attraction to a naked Frenchman who appeared at my museum the night before the grand opening.
Beverley: Do you have a plan for resolving them?
Kenzie: Hah! I am out of my element when faeries, demons, and naked Frenchmen arrive while I am trying to impress my boss that I have everything under control.
Beverley: Is there anything else you’d like us to know about you?
Kenzie: There is a secret about my heritage Henrí keeps assuming I know. I don’t and trying to stay alive proves harder as the demon closes in…on me!

Henrí Chevalier's last memory, before stumbling naked into a museum’s moonlit garden, was Auguste Rodin and his dusty Paris studio in 1886. To escape his broken heart, Henrí volunteered to sleep inside a statue until needed. Expecting
to die, he discovers he must learn to use the unexpected powers Heaven has given him. Without them he will fail his mission against otherworldly creatures, such as demons and faeries.
Kenzie Mackintosh, a dedicated art museum's curator, spies a naked man hiding
among bronze statues. A quick glance ignites desire within her, but she is too tied-up in work to act on it. Unaware of her fae heritage, their relationship heats up as he disrupts her job. While Henrí tries to process modern buildings, cars, and a broken elevator, a demon attacks and forces Henrí and Kenzie to enlist
the aid of her powerful fae relatives. When the demon possesses the body of her ex-lover and threatens to kill him, then use her to take over the world, Henrí and Kenzie must learn to trust each other, even if Kenzie’s death might be the only answer to the world’s salvation. 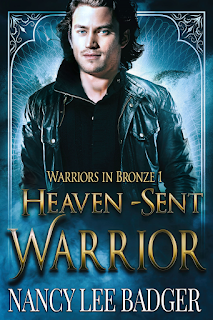 Excerpt for Heaven-sent Warrior
Kenzie’s gaze flit toward the door, then back to him. “Are we safe?”
"The spells I neglected to use are now in place. Whatever fell down those stairs ran off. Tomorrow, I shall return to the museum and search for its human host.”
“You can do that?”
“I felt the warning as it approached. I have confidence I will feel it tomorrow, but my instincts are . . . unsettled.” Standing in front of her, Henrí cupped her cheek with one hand and placed the other on her waist.
“Um, was there something else?”
“Preparedness is best fashioned in solitude, but I do not want to say good-night.” Henrí’s eyes drew nearly shut as he leaned closer. “Lie with me.”
Is he serious?
Kenzie couldn’t get her mouth to work, but she knew the second he’d read her thoughts, because he nodded, then kissed her. She strove to be fearless and confident, but everything flew out the door when he slipped his tongue into her mouth. In the next two seconds, she’d either sink into his embrace and never stop kissing him back, or run.
“Stay with me tonight, mon ange,” he whispered.
He’d drawn his luscious mouth back a few inches, but his words sounded . . . familiar.
“It means my angel, since you have the look of the heavens in your lovely hair and exquisite eyes. You taste like ambrosia.”
“The mythical food of the gods?” she asked. She wanted to fan her face, but she’d locked her hands around Henrí’s neck.
“There is only one true God, mon ange.”
Kenzie nodded as her fingers tangled in his hair and pulled his mouth back down to hers. Anything to keep from considering the circumstances.
She withdrew, sucking in a breath. Circumstances? She had her tongue down a stranger’s throat after someone, whom Henrí called a demon, had nearly broken into her home. The feelings, sweeping her better judgment away, were foreign.
“Oui, I am French,” he whispered.
“Stop doing that.”
“Pardon?”
“You’re spooky.”
Actually, he’s too close, too enticing, too . . . male.
Henrí chuckled, then lifted her into his arms. At five feet ten inches, she was close to his height, but he didn’t so much as wheeze as he carried her to her bedroom. He lay down on the bed and snuggled up beside her, without taking his hands off her body.
What am I doing? This is wrong on so many levels.
Find all Buy Links for Heaven-sent Warrior here: https://nancyleebadger.blogspot.com/p/books.html