Weather As a Setting by Ken Gordon 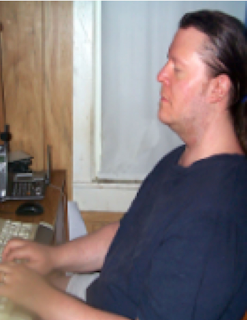 This week we’re going to find out a little about author Ken Gordon. November’s theme is ‘Weather as Setting’ so Ken will share his thoughts on this plus share a little about himself and his writing.


Kenneth Gordon grew up in Milford, NH and still lived in that state. When he isn’t writing scifi-infused horror novels, he plays PC games, electric and acoustic guitars, and drums. He also holds a brown belt in Kung Fu.
Beverley: Do you think using weather can be part of a setting?
Ken: Certainly, depending on the story. In some cases, weather can be a character itself.
Beverley: Do you know any authors who use weather in their books?
Ken: None come to mind, but it is a tool available for all writers.
Beverley: Have you ever used weather as a setting in any of your books?  If yes, tell us how.
Ken: I do not recall a time when I did, at least not for anything I have that was published.
Beverley: Which genre or genres do you write or prefer to write?
Ken: I write primarily sc-fi, yet within that framework, one can say anything, do anything, put any other genre within it.
Beverley: What prompted you to write in the genre/s you do?
Ken: I’ve always enjoyed Sci-Fi my entire life, it was a simple transition from watcher to writer.
Beverley: What genres do you enjoy reading?
Ken: The aforementioned sci-fi, of course. I also really enjoy fantasy.
Beverley: I’d love to hear what you think of the present genres, how they’ve been affected by self-publishing and where you think they might be headed.
Ken: I think the entire publishing industry has been affected, not just certain genres. It is certainly frowned upon, but self-publishing cannot be denied any longer by the industry. I’ve noticed hybrid shops popping up that are kinder to the self-publishing world, that is very likely where it is going. The best part about traditional publishing is that the author doesn’t have to shell out money, but finding the right house for your book can be very challenging.
Beverley: How long have you been writing?
Ken: Nearly 10 years for published titles, 24 years if you count collage writing, fanfic and short stories.
Beverley: Who influenced you the most in deciding to become a writer?
Ken: I may be unique in the world, but I have been more heavily influenced by episodic TV than by any book or author. In my case, I had a moment of inspiration which led to a story to tell. People who read it said it was good, so I threw my hat into the publishing ring.
Beverley: What obstacles did you have to overcome to begin creating your work?
Ken: Many times if I need help with certain aspects of a story, I have trouble getting that help. One book I wrote had an alien plague, so I called up the CDC to try to get some help. There likely was much laughing. I was finally able to get some help from an HIV doctor, but this is a definite obstacle. Many times I run out of ideas and have to set it aside for a while. Believe it or not, getting ideas for other books can be a terrible obstacle. You want to finish what you are working on, but you get inspired for something else and that is what you are drawn to.
Beverley: What gets your creative juices flowing?
Ken: Many times it will be a show I watch, or even a commercial for a dating service. It really can be anything.
Beverley: What will stop your creative muse the quickest?
Ken: Getting bored or blocked.
Beverley: What do you have for breakfast?
Ken: Usually cereal, English muffin, tea and oj.
Beverley: What do you wear when you are writing?
Ken: Nothing special, what I would normally wear for clothing: t-shirt, jeans or shorts
Beverley: Where do you do most of your writing?
Ken: At the computer.
Beverley: Do you have a favorite cartoon character? Why?
Ken: I cannot say I have a favorite, there are many characters/shows I have enjoyed over the years: Force Five, Star Blazers, Scooby Do, Superfriends, He-Man, Dungeons and Dragons, and many others.
Beverley: If you had an unexpected free day what would you do with it?
Ken: I could do some programming, writing, binge watch netflix, etc.
Beverley: What are you working on now?
Ken: Currently I’m working on a story about a 15 year old boy that is drafted into a space based branch of the military, serves a 20 year tour of duty, is taken back in time and put back into his 15 year old body. He has flashbacks of the things he did, but cannot reconcile the places he couldn’t possibly have been or all the things he couldn’t possibly have done. It is inspired by the life of Randy Kramer. One of the big adventures is being able to help the “Ant People” from Hopi legend remove their evil queen.

On a warm summer night, Jack Wallace awoke with a start. A strange feeling led him outside into the eerie night. A very odd sound greeted his ears as soon as the screen door closed behind him with a click.
He heard the sounds of retching coming from every house on the block that had children.
Each bathroom window was illuminated as the sounds increased in volume, duration, and frequency. Jack proceeded to walk around the neighborhood. The road was illuminated by the streetlights as well as the faint glow coming from the houses. It wasn’t long before something else pierced the veil of the night. The wail of ambulance sirens and a whirl of red and white lights roared past him one after another.

This is only the beginning… 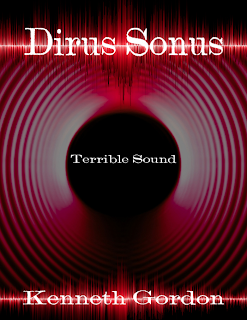 Excerpt for Dirus Sonus (Terrible Sound):
Walking briskly across the parking lot, he entered the building at the main entrance. The outside relative calm was instantly shattered by the tumult inside.
Doctors and staff were running about, phones were ringing, children were crying…it was sheer chaos. The waiting room was standing room only, even as the nurses’ station had a line snaking all the way down the hall and around the corner. Several times, he tried to stop one of the

doctors to get some answers, but each gave a hasty ‘No comment,’ and went about more important business. As he was backing up to get out of the way of a gurney plowing through, he accidently bumped into another doctor.
“Pardon me.”
The woman turned toward him, swore at him in Hindi and raised her arms in exasperation.
“Hey, I know you.” Jack realized.
Her eyes focused on him and some recognition was gained.
“Can I talk with you?” he asked.
“I am just coming off shift. Meet me please in the cafeteria, five minutes.”
Jack’s face brightened and he nodded. “Where is the cafeteria?” Jack inquired at the station.
No answer.
He asked again, louder this time.
Again nothing. This time he screamed it and finally received a response in the form of a finger pointing the opposite way. He cried, “Thank you,” but no one heard it.
Walked through Radiology and Physical Therapy, Jack found the sign. There was a large menu above a steel counter in the back of the room, a lady in white behind the counter ready to take orders. Tables were all arranged with plastic cloths, a coffee bar with fountain drinks, trash bins, and metal flatware in plastic bins added to the no-frills café.
Jack picked up a white Styrofoam cup and placed it under the coffee dispenser, pulled the handle down and let the blackish, brown liquid fill his cup. He released the handle, picked it up, and hastily took a sip.
As he spun around, he saw his neighbor walk in. Her eyes were brown with crow’s feet around them, and a half moon of black with baggy red underneath. She was dressed in pale green scrubs, her thick black hair pulled into a pony. She motioned for him to come to the table closest to the doorway.
Both sat down.
“Thank you for talking to me.”
“What can I do for you?” She rubbed her eyes and traced a path over the top of her head.
“How is your son?”
“Better. He is better.”
“It must have been a mad house last night…with all the people out there, you’d think it was an epidemic.”
“It might have been a full moon even if the calendar didn’t say so. No, people here now, they are scared. Heard on news. They want answers. Last night fairly quiet except for children on our block.”
“How many kids came in last night?”
“There was Ravi, Makey child, and Morgans’ two. Each presented with the dehydration. Ravi had worse than others. Touch and go, but he strong, and pull through. Makey boy still in treatment, Ravi now out of ICU. He come home tomorrow. Makey we release this afternoon. Others we release early this morning.”
“Do you know what caused this?”
“No idea. Odd that they all came in at the same time with all same symptoms. We brought Ravi in, had to do early shift.”
“I was awake and went outside, saw the whole thing. It was very surreal.”
She eyed him curiously.
“Thank you for talking with me.” He took another sip of coffee and grimaced.
“Coffee very bad here.”
“I see that,” he commented, as he cleared his throat.
She raised a finger and pointed it straight at him, “You press man, right? You be cautious in your writing. Leave Ravi name out, leave out condition too. Don’t need circus at our house.”
Jack raised his hands as if a gun were pointed at him. “I’ll execute as much tact as I can.”
“If you do not, I sue you. We clear?”
“Yes, ma’am. Again, thank you for talking to me.” Jack rose and slipped out into the hallway, bypassing the crowds and exiting the building. He took in a deep breath to clear away whatever recycled air he had inhaled.
The humidity was such that any deep breathing felt like drinking a glass of water. The heavy, stagnant air was almost too thick to breathe. Jack coughed a little and cleared his throat again. He hoped this wasn’t the start of something else.


Don’t forget to check back next week for another author interview and discussion of weather in books.
Posted by darkwriter at 9:56 PM