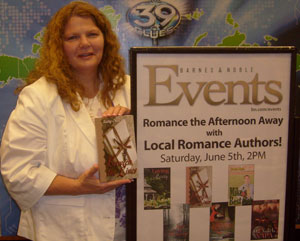 This week author Kathy Otten joins us with her tip.In between family, work and animals Kathy can be found at her computer weaving stories of laughter, heartache, and love for the crazy cast of characters swirling around in her head.


As writers we are constantly reminded to show, not tell our stories.
Telling--He was angry. Show. How? Slamming of the door, swearing.
Refine it some more. How would a man show his anger differently from a woman? A child?


Take it to a deeper level as you more thoroughly define your character, incorporating the social environment surrounding your character and their backstory.
Think about how your character reacts to other characters, situations, conflicts and even their own emotions.


An understanding of body language is a key element in being able to show your story to your reader in a believable way.


As authors we should never tell the reader whether or not to like a character. In the same way we form judgments and opinions of people based on our interpretation of their body language, the reader too, forms opinions about our characters, based on the visuals the writer creates.


So what is body language?


Body language is the non-verbal communication of feelings, attitudes, and moods.  It is shown through body posture, movement, facial expression, eye movement and position in relation to other people. It can be conscious or unconscious.


Body language is partly inborn or inherited (and consistent among all humans) and partly environmental (dependent on society groups and cultures).


Our ancestors needed to be able to read the body language of not only other humans, but animals, in order to know whether to trust, defend or attack.


Women have a better perception and interpretation of body language than men, probably because they needed good body language perception to reduce their vulnerability to males and the threat not only to their own lives but their children.


Body language is also relative to age and gender. The frontal lobe of the brain, which processes the subtle nuances of facial expression isn’t fully formed until the early twenties, which is why teens sometimes misinterpret the reactions of teachers and parents.


The young also tend to display more obvious gestures because they are naturally energetic, uninhibited and subtle. While older folks are less energetic, adopt more modest postures and are prevented by clothing and upbringing to use less pronounced gestures.


Interpreting body language also depends on context. Someone could be rubbing their eye because of irritation, fatigue, disbelief, or upset. Crossed arms could indicate someone is cold and they are trying to stay warm, or they could be feeling defensive. Someone scratching their nose could indicate a lie or an itch.


In thinking about those reactions which are unconscious like breathing, like rapid pulse, or body temperature also remember that they must be taken in context. Think about seeing someone with a rapid pulse, breathing heavily and perspiring. Have they just returned from a run? Are they sitting at their desk at work? Maybe they are in an interrogation room at the police station.


While voice is not usually considered a part of the study of body language, as writers, he tone and pitch of our character’s voice is important.  It might be unconscious or conscious.  How might a person react vocally to a sudden fright or shock? What about while making love?


Consider the human tendency to lie, deceive, manipulate and pretend. Of course the degree of each varies with each of your characters.  Now think about two people making love when one hates the other, or the killer reacting with surprise at the death of his victim.


A person giving a speech before a large audience might unconsciously stammer or talk softly. In order to appear before the crowd as the confident person they are not, they might have to consciously remember to speak loudly and clearly.


Body language also involves touch, how we touch ourselves and others. How close to we get to people depends on our level of intimacy with that person.


I’ve seen these steps used by romance writers as they develop the intimacy between the two main characters, but they actually reflect the level of our relationship between the people around us.


Think about people in your family, the people you work with, or strangers on the street. What level of intimacy to you allow with each person? What happens when someone jumps ahead to a level you have not allowed.
Danger! Danger!
Stages 1-3 are what we use most everyday, making eye contact and having conversation with people. Moving into Stage 4 is the first step into physical contact. Allowing someone to touch us is makes us vulnerable. Which is why you can only be tickled by someone you trust.
How does your character interact with their environment?  Do they fiddle with the pens on their desk, smoke, twirl their glasses, fuss with their clothing?


The eyes have often been called the windows to the soul and writers use eyes to help show a character’s reactions. Without words the eyes can communicate strong emotion and likewise create strong reactions.


As you write, think about how your characters react to their environment, circumstances and other characters. Replace some of your speech tags and instead use body language to show your story.


Blurb from “After the Dark”

Months in the trenches of France have left Liam Gallagher wondering why he has survived when better men did not. His guilt intensifies when he returns home only to come down with the deadly Spanish Influenza sweeping the country. Once again Liam lives when thousands do not.

Now the only bright spot in his monotonous life is the time he spends each day walking with Rosalie Moretti. Their talks give him hope for the future, a future possibly to include this vibrant, loving woman. Until one dark, catastrophic afternoon, when Liam realizes the reason his life was spared has come down to minutes and his ability to perform one selfless act.


Excerpt From “After The Dark”


The warmth of Rosalie’s palm pressed against his free hand. Heat rushed to his cheeks, and between their palms, his skin dampened. He laced his fingers with hers. With the pad of his thumb, he traced the top of her hand. Her skin was so smooth. Were all women this soft, or had he just never noticed?


She tugged him forward, and loath to release his hold, he followed her up the steps.


He cast one quick glance over his shoulder toward the city livery and blacksmith shop. He should return to his beat, walk around the tank, and chase away the lads and lasses who’d come with their pails to collect the constantly dripping molasses.


But when he looked back at Rosalie, a secretive smile teased the edges of her full lips, as though she were aware of her own seductive power over him. And like a green lad, fresh off the boat, he allowed her to lead him inside.


Thanks Kathy, for dropping by and sharing that great marketing tip.


Don’t forget to check back next week for another author’s tip or tweak.
Posted by darkwriter at 11:32 PM