I am getting ready to upload my new book, MISSING. It's the second in The Hawkins Family series, set in Montana. This is Luke's story. Luke is the only brother not working on the ranch. He's the town's doctor. The older doctor who was his partner is retiring and Luke has been advertising for a new doctor. His only response is Allie Parsons, from New York City, who can't believe the isolation of Duster, a small town in Montana. She has signed a contract to work temporarily there until he can find a permanent replacement. It's been edited and I'm going over it for the last time. I thought I'd share a short excerpt from it. If you have any comments, I'd love to hear them , especially if they'll make it a better book.


Allie pushed open the door to the clinic and stepped into the small, crowded waiting room. A slight scent of antiseptic tickled her nose. She stopped. Silence crept across the room. One by one, heads turned toward the door.
It might be the novelty of a stranger, but more likely it was the novelty of a stranger in fancy, city clothes with a run up her leg, all the way to her thigh. She threaded her way through the patients to the reception desk. Patient’s heads turned. A few of them put down the magazines they were thumbing through.  Allie made a mental bet that those magazines were probably three or four years old. The furniture in the waiting room had seen better days, but it was serviceable.
The men and women stared at her, probably wondering who the heck she was. Several patients smiled at her. She managed to return the smiles. At least no one laughed.
She approached the desk. The man standing behind the counter; tall, broad-shouldered, maybe thirtyish, with curly dark hair and a strong, square chin caught her attention right away. His cobalt blue eyes, under long dark lashes, latched on to her as she walked toward him. Even partially covered by his lab coat, his muscled chest strained against the white t-shirt.
If he was the doctor he definitely was not the old geezer she’d expected.
A few feet from the desk, she stopped. His electric blue eyes locked into hers. She couldn’t look away. Sensuality oozed across the space between them. Her breath hitched into an irregular rhythm, kicking her pulse up a notch.
“Good, you finally got here. I thought Jean would send someone a little faster.” His rich, smooth voice rolled over her. “Look, we’re backed up. Patients’ files are over there and the appointment book is on the desk. Check them in, pull their file, and put the file in the slot by the examining room door.”
“Excuse me?” She managed to break eye contact. She stared up at the man snapping orders at her. She’d run away from one tyrant and had no intention of putting up with another over-bearing one, even if he was knock-down gorgeous. His firm abs, linebacker-type shoulders and muscular body did not compensate for his attitude.
Who did this jerk think he was?
Her back stiffened. She assumed he was the doctor, but his manners confused her. If staff and working partners were expected to put up with this, no wonder they hadn’t been able to find another doctor.
“You’re not going to make me repeat all that are you? I have a room full of patients. I thought when I asked Jean to send a temp over from the hospital she’d send someone with training and at least a vague idea of what you were doing.” A sigh slipped through his lips and he rolled his eyes. The look he gave her placed her one step above an idiot.
He turned and pointed to a huge pile of folders. “The patients’ files are…”
Allie pulled her shoulders back, raised her chin and tightened her lips together. “Excuse me. I believe you’ve made a mistake. First of all, I’m not stupid. Second, I’m not your damn temp. I’m a doctor, Alexandra Parsons, M.D. I understood you were expecting me.”
“You’re the new doc? Shoot. I didn’t expect you today.” The heart-stopping man stared down at her. His full lips drooped in apparent disappointment.
The disappointment could be her, or the fact he still didn’t have a temp. She couldn’t tell.
“I arrived early, so I could acquaint myself with the town and find a place to live. I just dropped by to introduce myself.”
He focused on her, drawing his eyebrows into a frown. “You’re the new physician. I should have known by that fancy outfit. It screams big city.”
“Sorry. I’ve just arrived and haven’t had time to get my jeans and plaid shirt yet. I’ll move that to the top of my list, so I’ll fit in.”
A smile tugged at the corners of his mouth, but he controlled it. He ran his fingers through the tangle of dark curls. “Look, I’m sorry. I mean … my mistake. Donna, my receptionist quit this morning with no notice. She ran off with some truck driver. I’ve got a room full of patients and a long list of messages to return. The phone keeps ringing, and right now, I need a receptionist to sort this mess out.”
“I see.”
“Yes, I also desperately need another doctor. My day is not going well, as you can see. I’m Luke Hawkins by the way.” He stuck out his hand.
She wiped her hand on her skirt before extending it. He immediately encased it in strong fingers.
“And I suppose that receptionist is expected to be a female?”
“Wha…?” He dropped her hand.
She shook her head. “Forget it.”
Allie stepped behind the desk and opened a bottom drawer. She dropped her purse inside, before glancing at the appointment book. “Mrs. Douglas?” 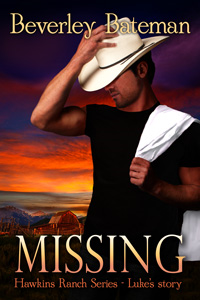 Posted by darkwriter at 5:16 PM