Sheila Stewart and her New Release 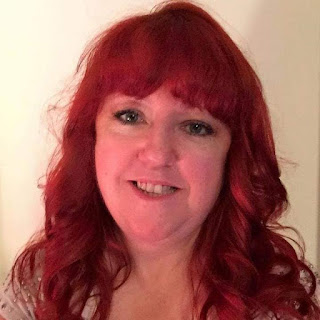 Shiela Stewart is a paranormal suspense author with a writing history that stems back to her youth.  Always a dreamer, wondering if her stories would ever reach an audience, she was finally published in 2006 and hasn’t stopped since.  It is rare to find a stand-alone book as she prefers series stories. Her longest running series to date is her Darkness series, which is a vampire romance.

Her joy for scary suspense is evident in each of her books. She has had several accomplishments, including fighting for the top spot in the rankings with author Stephanie Myers, receiving glowing reviews as well as interviews on local television and reviews and interviews in The Romantic Times Magazine.

When not writing, Shiela spends her time with the love of her life, William, and their children and grandchildren. Her strong affection for animals is evident in the many cats she cares for.

Her favorite time of the day is at sunset.

Beverley: What’s your name?
C.J.: C.J. Dowling the 2nd. I was named after my grandfather.

Beverley: Where did you grow up?
C.J.: It takes place in current time but shifts back to early 1900’s.

Beverley: What’s your story/back story? Why would someone come up with a story about you?
C.J.: Why wouldn’t they? I’m smart, Charismatic, handsome—all joking aside, my story is incredibly fascinating. I was born with the ability to see and communicate with ghosts. I know, I can hear everyone snorting and laughing. I’ve received that reaction all my life. I don’t why I can see spirits, I just know I can’t avoid them. You’re not alone in thinking I’m crazy. My family did as well. So much so, they sent me to psychiatrists and even had me committed. You’ll have to read my story to find out why they believe me now.

C.J.: To put the dead to rest. I’ve been called to help put an end to a torturous spirit refusing to leave his house. He is not a nice man.

C.J.: I want to put an evil spirit to rest, he is determined to stick around. Let me tell you, it’s not easy.

C.J.: Yes, I do. I have to find what is keeping the spirit tethered to the house. And, I have a secret weapon who helps me.

Blurb from Secrets of the Dead:

Jessica Coltrane is a die-hard sceptic who believes that ghosts and paranormal activity are nothing more than a figment of an overactive imagination. That is until she finds herself locked inside a haunted house with the enigmatic paranormal investigator C.J. Dowling.
Born with the ability to see and speak to the dead, C.J. Dowling thought investigating a haunted house would be a job like many others. He’s prepared for anything—except smart and sexy Jessica.

Working together in close quarters, C.J. and Jessica discover it isn’t only negative tension between the two, but sexual as well. Giving into their desires seemed like a good idea at the time, until they wake and find the spirits thought otherwise. Trapped with the ghost of a child long forgotten, an amorous entity that is threatening Jessica, and a powder keg of a spine-tingling mystery that might just be better left buried. 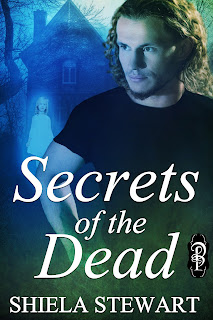 Excerpt from Secrets of the Dead:

Recognition hit and woke her with an angry slap. Eyes shooting open, she sat up quickly and instantly regretted it when the room spun wildly around her. Laying back down, closing her eyes, she waited out the dizziness the hangover caused. Her mind raced to the night before.

The soft ache in her loins reminded her of what she’d done. Carefully opening her eyes, she turned her head to see a naked C.J. beside her.

“Oh, God.” She looked over his naked body, remembering how good it felt having him inside her. She hadn’t been that drunk that she couldn’t remember the event, and lord, what an event it had been. They had literally torn each other’s clothing off. She’d been an animal, which was so not like her.

What did they do now? Would they go on as they had been, sniping at each other, treat this as a one-night fling and move on? In truth, the guy irritated the hell out of her, yet he’d made her feel so incredible the night before. How was she supposed to respond to him now, after sharing something so intimate?

“Dowling,” she spoke quietly. “Dowling.” When he moaned, she slapped his chest. “Dowling!”

“I’m awake.” He looked at her with a smile. “Morning.” Then his eyes went wide. “Holy hell.” He bolted upright and jumped to his feet, nearly knocking her over. “Oh, my God.”

“What the hell?” The sofa stood on its end, two sitting chairs slammed up right against it, all pushed against the window. The coffee and end tables stood one on top of the other, in front of the fireplace.

Carefully, Jessie stood up, waiting out the dizziness. She had to rub her eyes to make sure she wasn’t seeing things. It looked like a hurricane had blown through. “How…”

“I need to check my equipment.” He flew off, still nude, and she got one hell of a look at his ass.

She saw her shirt by the fireplace, straps torn. She couldn’t exactly wear it in its condition. Spotting his shirt hanging over the couch, she grabbed it and put it on. It barely covered her, but would have to do for now.

“This is incredible. The meters went off the scale. The temperature recorded several degrees below freezing at one point. It didn’t last long, though, as it rose exponentially. And we slept through it all. Damn, I have never seen anything like this before. It’s phenomenal.”

“You’re naked.” She tossed him his jeans, hitting him square in the face.

Unaffected by it, he grabbed the jeans and slipped into them using his free hand.  It amused her to watch him shimmy into his tight jeans, jumping from one foot to the other. “The cameras!” He rushed to the video equipment as he did up his pants. “Do you know what this means?”

“That you were a busy boy last night.”

He looked at her, confused. “Beg pardon?”

“I don’t know how you managed it all alone, but I give you credit for a job well done.”

“You think I did all of this?”

“No, I know you did all of this. Boy, you’ll do anything to make me a believer.”

His eyes narrowed and his voice dipped an octave. “You think I did all of this just to make you believe there are ghosts here?”

“Fine.” Walking to her, he grabbed her arm and led her to the camera.

“Not until you see this.” Taking her by the shoulders, he turned her to face the monitor attached to one of the cameras. “Watch.” He pressed play.

Folding her arms across her chest, Jessie glared at the screen. He’d recorded them having sex.

“Oh my God, you taped us making out? How could you?”

“I have my cameras set on timers that begin taping on their own. I didn’t know we were going to go at it like rabbits last night. Watch.”

“You will erase those tapes,” she insisted, then grunted when he turned her face back to the monitor. “What the hell?”

She couldn’t pry her eyes away if she tried. The furniture lifted in the air, spun around wildly before they slammed in front of the fireplace and window. “Oh my god!”

“My sentiments exactly. I need to check the rest of the house.” He left her mesmerized in front of the TV.

Buy Links for Secrets of the Dead

Posted by darkwriter at 8:36 PM