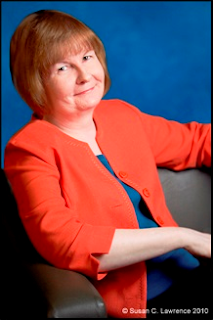 Barbara White Daille lives with her husband in the sunny Southwest. Though they love the warm winters and the lizards in their front yard, they haven’t gotten used to the scorpions in the bathroom. Barbara also loves writing, reading, and chocolate. Come to think of it, she enjoys writing about those subjects, too!

Barbara wrote her first short story at the age of nine, then typed "The End" to her first novel many years later...in the eighth grade. Now she's writing contemporary romance on a daily basis. Sign up for her newsletter to keep up with the latest in her writing life:  https://barbarawhitedaille.com/newsletter.
Hello, again! I’m glad to be back here for a visit. This time, I’m sharing a peek at The Cowboy’s Little Surprise, book one in the Hitching Post Hotel series. Book seven, The Rancher’s Family, debuts in September. The series features a matchmaking grandpa who wants to see his three granddaughters married and settled down—preferably within driving distance of his New Mexico ranch! The interview below is with the hero:
Beverley: What’s your name?
Cole: Cole Slater
Beverley: Where did you grow up?
Cole: Here in Cowboy Creek. Not on a ranch, unfortunately, but in a too-small house in town, one I couldn’t wait to leave.
Beverley: During what time period does your story take place?
Cole: Current day, after a long absence from Cowboy Creek.
Beverley: What’s your story/back story? Why would someone come up with a story about you?
Cole: Haven’t a clue. I wasn’t a great student, didn’t go in for many sports, and spent more time flirting with girls than studying. About the only thing I took seriously growing up was watching out for my younger sister and protecting her from our dad.
Beverley: What’s your goal in this story?
Cole: To put the past behind me and focus on the future I never expected to have—one that includes a child.
Beverley: What conflicts are you facing?
Cole: Mainly, my son’s mother. I didn’t know till recently that I’d even had a son, and I want to get to know Robbie. Tina doesn’t want me anywhere near the boy.
Beverley: Do you have a plan for resolving this?
Cole: I’d like to see Robbie whenever I come back to Cowboy Creek. The plan is to prove to Tina I’m worthy of being a daddy.
Beverley: Is there anything else you’d like us to know about you?
Cole: I’m not the boy who left Tina behind when I left our hometown. The years away have changed me. That’s another thing I plan to prove.


Book Blurb for The Cowboy’s Little Surprise
A guy like Cole Slater is hard to forget. Tina Sanchez should know—for years since high school she's tried to bury the pain of Cole's cruel betrayal. But it's impossible to ignore the man she sees reflected in her young son's eyes now that Cole is back in her life—and about to meet the child he never knew he had. 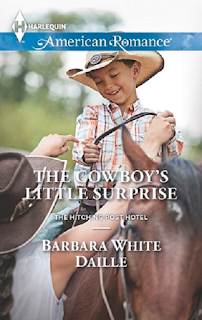 Returning home to New Mexico, Cole is determined to put his playboy reputation to rest. Especially now that he knows there's a little boy looking up to him. And seeing Tina again reignites all the feelings Cole ran from as a teen. Despite his fear that he can't be the man Tina deserves, he's determined to try. For his son's sake—and his own.
Excerpt from The Cowboy’s Little Surprise
The following excerpt is from the point of view of the heroine, Tina, who’s about to get a surprise of her own:
Tina glanced up at the Hitching Post, all three stories of it, all the way up to the windows of her attic hideaway. She loved the hotel, the only home she and Robbie had ever known. Her grandfather had also lived here his entire life. Jed couldn’t like the idea of all those empty guest rooms, either.
Sighing, she reached for one of the grocery sacks in the back of the truck. Footsteps on gravel made her pause. Maybe this was someone who wanted to book a room. She turned with a welcoming smile.
That smile died on her lips when she saw the cowboy standing in front of her. The cowboy who’d left Cowboy Creek—and her—in his rearview mirror five years ago.
Cole Slater.
In one startled, reflexive sweep, she took in almost everything about him. The light brown hair showing beneath the brim of his battered hat. The firm mouth and jaw. Broad shoulders. Narrow hips. The well-worn jeans, silver belt buckle, and scuffed boots. In the next reluctant second, she turned her gaze to the one feature she had deliberately skipped over the first time.
A pair of blue eyes that made her think instantly of her son.
Clutching the grocery sack, she demanded, “What are you doing here?”
His face looked flushed. But he didn’t appear angry, the way he would have if he’d seen Robbie and put two and two together. She breathed a sigh of relief at the reprieve, no matter how brief, giving her a chance to come to grips with his return to town. If she ever could.
Seeing him again had brought back years of memories she didn’t want to think about.
She should have known better than to fall for Cole Slater. At the tender age of seven, she had already heard about his reputation as a sweet-talker. By junior high, he had progressed to a real player. And by senior high, he had turned love-’em-and-leave-’em into an art form, changing girlfriends as often as she replaced guest towels here at the Hitching Post.
Too bad she hadn’t remembered all that when he had finally turned his attention her way.
He shoved his hands into his back pockets, which pulled his shirt taut against his chest. Now, she felt herself flushing as she recalled the one and only time—
No, she wasn’t going there.
And he wasn’t staying here. “You must have made a wrong turn somewhere. I suggest you find your vehicle, wherever you might have left it—”
“I parked near the barn—”
“—and be on your way.”
“—and to answer your question, I came to see Jed.”
“What for?”
“He invited me.”
“Then I assume you’ve seen him already and, as I said, you can be on your way.”
“You and I need to have something out first.”
Please, no. Had he caught a glimpse of Robbie, after all?
Buy Links for The Cowboy’s Little Surprise
http://www.amazon.com/Cowboys-Little-Surprise-Hitching-Hotel-ebook/dp/B00OY9Z9AE B
Barnes & Noble
http://www.barnesandnoble.com/w/the-cowboys-little-surprise-barbara-white-daille/1120323490
Books-a-Million
http://www.booksamillion.com/p/Cowboys-Little-Surprise/Barbara-White-Daille/Q897140487?id=6188230701440
Harlequin
https://www.harlequin.com/shop/books/9781460379844_the-cowboys-little-surprise.html
Kobo
http://store.kobobooks.com/en-US/ebook/the-cowboy-s-little-surprise
IndieBound
http://www.indiebound.org/book/9780373755646
Find Barbara and her books: Website  https://www.barbarawhitedaille.com


/category/barbara-white-daille/
Posted by darkwriter at 7:48 AM