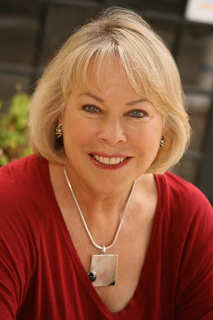 Regan Walker is an award-winning, bestselling author of Regency, Georgian and Medieval romances. Her stories often feature a demanding sovereign who taps his subjects for special assignments. Each of her novels includes real history and real historical figures as characters. And, of course, adventure and love, sometimes on the high seas!
Beverley: Which genre or genres do you write or prefer to write? And why?
Regan: I write what I love to read: historical romance. I love getting lost in the past with a compelling story set deep in history. I’m a reviewer, too, so I read in many subgenres. Historical Romance Review is my blog: https://reganromancereview.blogspot.com/
Beverley: Who influenced you the most in deciding to become a writer?
Regan: I have been a writer since grade school. I don’t think anyone influenced me; it was just something I did. But I did not begin to write historical fiction and historical romance until my law career ended. It began as a hobby and became a passion.
Beverley: What gets your creative juices flowing?
Regan: Research into the past… especially when I discover some juicy historical fact that brings a character to life. In my research for A Fierce Wind, when I learned one of the generals of the Revolution was a man who did not feel constrained by the bounds of morality and, moreover, was viewed by his men as incompetent, well, that allowed me to paint a picture the readers would grasp instantly.
Beverley: Do you have a favorite cartoon character? Why?
Regan: Beatrix Potter’s Peter Rabbit appeals. He’s an adventuring sort and I like that. I also like that the animation is beautifully done.
Beverley: Who would you love most to meet 'in person' and why?
Regan: I think it might be Queen Margaret of Scotland, the wife of Malcolm III. She’s a character in my novel Rebel Warrior (and The Refuge). I did so much research on her I feel I know her. My research revealed a wise, gracious and beautiful woman who gave up her dream to embrace another for the benefit of Scotland and that sacrifice was to have positive effects for centuries.
Beverley: If you had an unexpected free day what would you do with it?
Regan: I would spend it with a friend, beginning with breakfast out at a beachside restaurant. Then perhaps a bit of shopping, a movie and an elegant dinner. Being with someone you like and with whom you share common interests is a delight.
Beverley: What are you working on now?
Regan: I’m just beginning the research for Rogue’s Holiday, book 5 in the Agents of the Crown series. It’s a Regency set in 1820 that beginning with the Cato Street Conspiracy that could have wiped out the British cabinet but the plot was foiled before it reached fruition. And then the story will go to Brighton, the pleasure palace of the new King George IV, where Sir Robert Powell will meet his nemesis, Miss Chastity Reynolds.


Blurb for A Fierce Wind
An exciting story of love in the time of revolution when loyalties are torn and love is tested and when the boy Zoé Donet knew as a child turns out to be the man of her dreams.

Love in the time of revolution
France 1794
Zoé Ariane Donet was in love with love until she met the commander of the royalist army fighting the revolutionaries tearing apart France. When the dashing young general is killed, she joins the royalist cause, rescuing émigrés fleeing France.
One man watches over her: Frederick West, the brother of an English earl, who has known Zoé since she was a precocious ten-year-old child. At sixteen, she promised great beauty, the flower of French womanhood about to bloom. Now, four years later, as Robespierre’s Terror seizes France by the throat, Zoé has become a beautiful temptress Freddie vows to protect with his life.
But English spies don’t live long in revolutionary France. 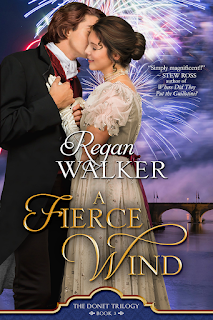 Excerpt for A Fierce Wind – Freddie goes after Zoe in Granville
Freddie paced the deck, glancing toward shore, wishing the fog would miraculously part to reveal the skiff he awaited. He had tried to convince Zoé of the foolhardy nature of her excursions into the ports to gather the refugees like a mother hen gathers her chicks. Stubborn as always and determined to save as many as she could, she would hear none of it. While he could admire her courage, he feared for her safety.

Standing amidships, Bequel nervously chewed on a bit of broom straw, bespeaking his unease at the vulnerable state of the ship idling in Granville’s harbor for so long.
The crew, silently going about their tasks, kept glancing toward shore.
Except for the occasional band of drunken men, loud in their goodbyes as they left the taverns, silence reigned on the quay some fifty yards away.
Freddie’s anxiety reached a crescendo. “She should have returned by now. Something must have gone wrong.” He faced Bequel. “Spare me a few of the crew. I’m going after her.”
That the quartermaster motioned two of the crew forward and ordered them to lower the boat and take Freddie ashore betrayed his worry for the capitaine’s niece.
Moments later, the rowing boat moved silently through the fog-shrouded waters. Freddie’s stomach churned, his eyes fixed on the wharf emerging from the dense mist.
What could have happened to her?
Buy links for A Fierce Wind:
US: https://www.amazon.com/dp/B07FYPFVRL
UK: https://www.amazon.co.uk/dp/B07FYPFVRL
Canada: https://www.amazon.ca/dp/B07FYPFVRL


Regan is happy to offer a giveaway of the ebook of To Tame the Wind, book 1 in the Donet Trilogy (A Fierce Wind is book 3). It has won multiple awards. You can see To Tame the Wind here: http://www.reganwalkerauthor.com/to-tame-the-wind.html.
Posted by darkwriter at 9:49 PM