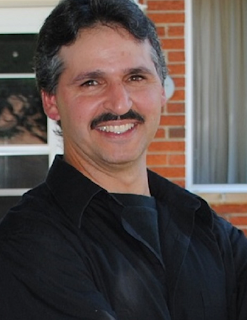 Rick McQuiston is a forty-six year- old father of two who loves anything horror related.  By day, he works for a family-owned construction and management company. By night, he churns out horror fiction.


Rick has well over 300 publications so far. He’s written seven anthologies, one book of novellas, and edited an anthology of Michigan authors. He’s also a guest author each year at Memphis Junior High School, and is currently working on his fifth novel, a Cthulhu-based anthology. Rick currently has two novels with Class Act Books:  Fear the Sky and When Only the Nightmare Remains, which was voted #2 in Horror for 2015 by the Paranormal Romance GuIld’s Reviewer’s Choice.


Beverley: Which genre or genres do you write or prefer to write? And why?
Rick: Without a doubt, horror. I like fiction with a bite. To me, the whole purpose of a story is about the conflict and resolution between protagonists and antagonists.
Beverley: Who influenced you the most in deciding to become a writer?
Rick: My older brother. He wrote an excellent short fantasy novel some years ago (but never had published) and it inspired me to try my hand at it.
Beverley: What gets your creative juices flowing?
Rick: A hot cup of tea, a comfortable chair, and a quiet house.
Beverley: Do you have a favorite cartoon character? Why?
Rick: Bugs Bunny. I like the way he always outsmarts his adversaries.
Beverley: Who would you love most to meet 'in person' and why?
Rick: H.P. Lovecraft. Even though he was an odd fellow, I would love to hear firsthand where he came up with his ideas.
Beverley: If you had an unexpected free day what would you do with it?
Rick: I would probably do some writing, watch movies, and work on my music.
Beverley: What are you working on now?
Rick: A short story about nightmares that leak into reality, my sixth novel, and another anthology.


Blurb for When Only the Nightmare Remains:
A town sheriff and three young boys manage to overcome an evil entity threatening their town. 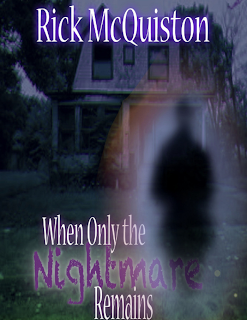 Excerpt for When Only the Nightmare Remains:
Emily nudged closer and closer to the spider-webbed pane of glass. The window offered little in the way of a view—being octagonal and no larger than a dinner plate— but what it did reveal was adequate to say the least. It allowed anyone gazing through it to see the lush rolling landscape surrounding the house…and all it contained.


Feeling her already weak heart pound heavily in her chest, Emily scanned the grounds intently, watching for any signs of movement, for any hint of life. For any signs of William. She held the Book tightly in her small hands, refusing to relinquish it to anything or anyone. She had only scratched the surface of its contents, but that was still enough to impart its importance to her.


Her eyes moistened with tears as she thought of earlier, happier times in her life and her marriage to William.  She should have been thinking about raising a family and planting flowers around the front porch of her home. She should have been thinking about what to cook for dinner when her husband returned home from a hard day’s work. All these simple notions, ones so many young people took for granted, were well beyond her grasp. In their place were terrifying visions of a dim future. Or worse—no future at all.


Movement caught her eye, sending a fresh batch of fear down her already frail spine. She rubbed her eyes to clear them and stared at the spot where she thought she had seen something. It took only a few seconds before her fears were confirmed. Something had moved. She was sure of it, but it was not easily noticeable. Whatever was lurking in the dense foliage was crafty and using stealth to its advantage.


Despite expecting it, Emily found herself cringing from the implications. She knew what it was, slithering around the fields, worming its way closer and closer with each passing minute. She also knew that eventually, inevitably, it would reach her house.


Her house. It was her house and hers alone since her beloved husband died earlier that year. Nearly eight cold, empty months had passed since that fateful day when a bullet found its way into his forehead, killing him instantly. Some said that it was a suicide. Perhaps it was, but Emily was not so sure. William had no reason to kill himself.


The pain of that day pushed its way into Emily’s heart, so slowly at first as to be almost unnoticeable, but gradually increasing in its intensity. William had been a good man and a good husband, at least he was before he had changed into a cold, cruel person wholly incapable of compassion or love.


Emily stepped back from the window and slumped into a small, worn leatherback chair. She was exhausted, both physically and emotionally, and the alluring thought of sleep entered her mind more than once. She ignored it. She had too many problems, too many things to think about to be able to enjoy a good rest. Not that she didn’t deserve it.


Outside the house, nestled snugly within the green vegetation of the fields, something waited for its chance to move, to advance toward the house and reach a solitary figure huddled in the attic of the building, and end her life.
Buy Links for When Only the Nightmare Remains: 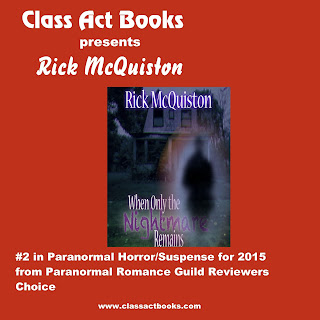