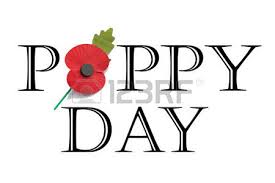 I’m a Canadian and November 11th is officially called Remembrance Day, but it is also known as Armistice Day and Poppy Day. Remembrance Day marks the anniversary of the official end of the World War I hostilities on November 11, 1918. The artificial red poppy symbolizes those who died.
Veterans and Legion members volunteer to sell the poppies in malls and in front of grocery stores and liquor stores. They begin right after Halloween. And it’s by donation – any amount. Banks, insurance companies and smaller stores have poppies available with a donation box for those standing inn line to pay a cashier.


Most Canadians wear the artificial poppy in their lapels to honor those who died in WW1 and WW2 until November 11th.
The poem, “In Flanders Fields”, written by John McCrae, in May 1915 is read, printed and shared at tis time. Apparently during the early days of the Second Battle of Ypres a young Canadian artillery officer, Lieutenant Alexis Helmer, was killed on 2nd May, 1915 in the gun positions near Ypres. An exploding German artillery shell landed near him. He was serving in the same Canadian artillery unit as a friend of his, the Canadian military doctor and artillery commander Major John McCrae.
As the brigade doctor, John McCrae was asked to conduct the burial service for Alexis because the chaplain had been called away somewhere else on duty that evening. It is believed that later that evening, after the burial, John began the draft for his now famous poem “In Flanders Fields”.
I learned this poem in school (many, many years ago) and still remember it.


In Flanders Fields”, by John McCrae
In Flanders fields the poppies blow
Between the crosses, row on row,
That mark our place; and in the sky
The larks, still bravely singing, fly
Scarce heard amid the guns below.


We are the Dead. Short days ago
We lived, felt dawn, saw sunset glow,
Loved and were loved, and now we lie
In Flanders fields.


Take up our quarrel with the foe:
To you from failing hands we throw
The torch; be yours to hold it high.
If ye break faith with us who die
We shall not sleep, though poppies grow
In Flanders fields.

Posted by darkwriter at 8:49 PM